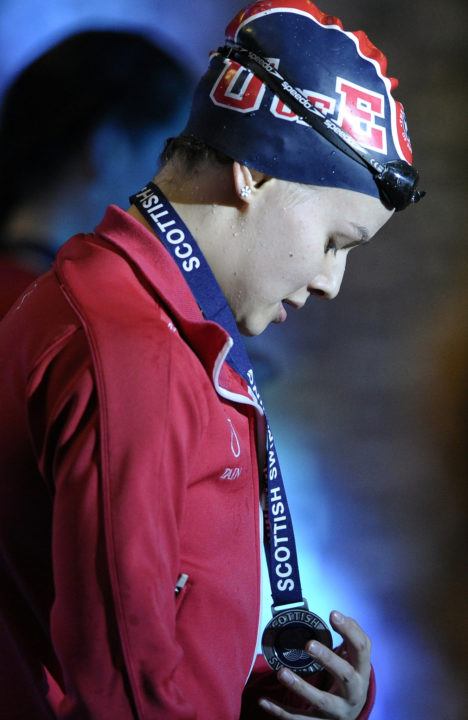 Lowering her own 15-16 NAG Record and setting the World Jr Record in the 100 fly with 56.20, Claire Curzan became the 2nd-fastest American in history.

The Glasgow International Swim Meet kicked off today at the Tollcross International Swimming Centre, site of this year’s European Championships. With that international competition on the horizon, many high-profile swimmers are in the midst of heavy training and producing in-season times.

Kathryn Greenslade was tonight’s fastest 200m backstroker for the women, climbing atop the podium in a time of 2:13.09, while Perth City’s Stephen Milne‘s pedestrian 2:04.09 topped the men’s field.

Ireland’s breaststroking ace Mona McSharry was also in tonight’s 200m IM race, clocking a mark of 2:17.76 for silver, while 14-year-old Katie Shanahan of the host club City of Glasgow rounded out the top 3 with an outing of 2:18.39.

McSharry surged to the top of the 50m breaststroke podium later in the session, winning gold in 31.75, while Alex Murphy tied Zak Aitchison for the win in the men’s edition of the sprint. Both touched in 28.32, while Stirling Olympian Craig Benson fell just shy in 28.44 for bronze.

Two-time Olympic silver medalist Duncan Scott raced the 50m breast as an off-event, winding up a respectable 6th in 29.06.

Edinburgh swept the podium in the women’s 50m freestyle, led by Katherine Stark‘s time of 25.74, the only sub-26 mark of the field. Behind her were teammates Rachel Masson and Lucy Hope who finished in 26.08 and 26.14 for silver and bronze, respectively.

Another Edinburgh swimmer, Tain Bruce, raced her way to the only sub-minute time in the women’s 100m butterfly tonight. Bruce won the race in 59.35, the 2nd fastest time of her career. Olympian and Commonwealth champion in the 400m IM, Aimee Willmott was well behind Bruce tonight, registering 1:01.48 for runner-up.