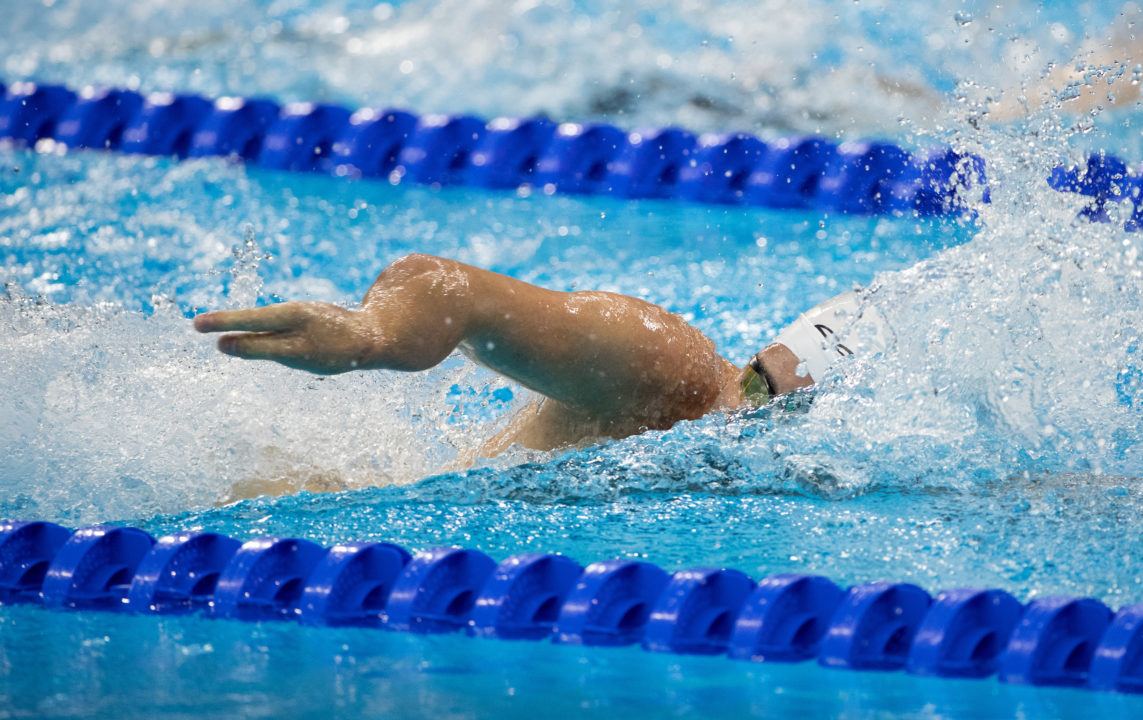 Finishing first in the preliminary heats was Belarus’ Ihar Boki with a time of 4:02.23. Following him were Ukraine’s  Iaroslav Denysenko and Uzbekistan’s Dmitriy Horlin.

USA’s Rebecca Meyers will be seeded first going into tonight’s finals. Meyers finished with a time of 4:29.97 . She is the defending world record holder in this event with a best time of 4:21.66. Following her closest into the finals heat are Anna Stetsenko of Ukraine and Naomi Maike Schnittger of Germany.

New Zealand’s Cameron Leslie finished first in prelims with a time of 2:29.36. Leslie looks to defend his world record title in this event in tonight’s final session.

This event got off to a very fast start when China’s Jiao Cheng broke the Paralympic and World Records with her time of 2:47.57. The previous record was 2:47.84 held by Denmark’s Karina Lauridsen. China will have two swimmers in finals for this event as Yue Deng finished third in prelims with a time of 2:58.54.

USA’s Bradley Snyder placed first in prelims with a time of 26.06. He is followed closely going into finals by China’s Bozun Yang and Russia’s Henri Herbst.

China continued the prelim session with yet another swimmer qualifying for finals. Guihzi Li set a Paralympic record with a time of 30.89. The previous record was a time of 30.94 held by Italy’s Cecilia Camellini. In addition to Li, China will send two more athletes into this final. Qing Xie and Liwen Cai will both be competing in tonight’s final session of the 50M Free.

Prelims of this event got off to a fast start when world  and paralympic record holder Sophie Pascoe broke her own Paralympic record with a time of 1:04.37. She is seeded first going into finals with China’s Yi Chen and Spain’s Isabel Yinghua Hernandez Santos seeded second and third, respectively.

Australia and Hungary will both send two swimmers to the finals heat of this event. Australia’s Timothy Disken and Brenden Hall took the top two seeds, while Hungary’s Tamas Toth and Tamas Sors are seeded third and seventh respectively.

China will be sending three swimmers to the final heat of this race. World record holder Quing Xu will be seeded fifth in the final heat. His teammates Hong Yang and Hongguang Jia are seeded second and fourth, respectively.

Great Britain’s Eleanor Simmonds set a new Paralympic record with a time of 3:02.40. She shattered her own previous record of 3:05.29 from the London Paralympics

Ukraine will send three athletes to finals of this event. Ievgenii Bogodaiko finished first with a time of 30.74. His teammate KOZLENKO Andriy Kozlenko came in second with a time of 31.23. Marian Kvasnytsia also of Ukrine qualified for the finals heat with a time of 33.07.

Finals for these events will take place Monday September 12 at 4:30 PM Eastern Time.

Watch the hype video of Konkoly and tell me that she’s an S9. She’s as able bodied as any other swimmer competing in USA swimming. Watch her underwater, getting on the blocks unassisted. The Paralympic movement has shot itself in the foot. No one really cares anymore, because any authenticity has disappeared.

Aweful aweful aweful. IPC please explain how an athlete with 4 strong working limbs could possibly be a 9!? I watched the underwater footage and found it hard to digest how harsh this is on genuine S9s. Gascon and Cole had no chance before they even left the blocks. It is also a disgrace that Du Toit’s world record was broken. Du Toit will always be the wr holder of this event in my mind until an athlete belonging in the S9 class breaks it.