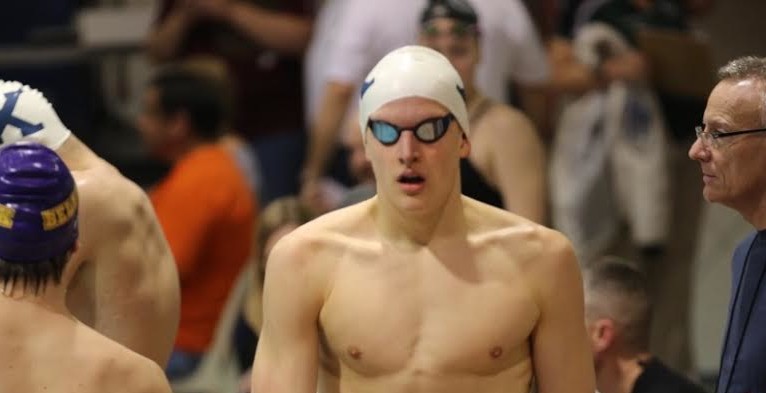 St. Xavier's Grant House looks to be a difference-maker for the Bomber, who are looking for their 8th consecutive state title. Archive photo via courtesy of Ann Moran

Last year’s state champions from Upper Arlington won a tough battle against Cincinnati St. Ursula, and it looks like the fierce duel will continue at this year’s meet. Several key seniors were lost across the board, leaving state championship titles up for grabs among the crop of new talent from around the state.

Upper Arlington carries two individual top seeds into the meet, in the form of senior Erin Sheehan and sophomore Hannah Caldwell. Sheehan comes into the meet as the only sub-54 100 yard butterflier, sitting as the top seed in her mark of 53.93. As a junior she finished 6th at last year’s meet with a mark of 55.52 and her incoming time already surpasses what it took to win the state title last year (54.35).

Her teammate Caldwell leads the incoming 100 breaststroke field, entered with a time of 1:02.17 as just a sophomore.  1:04.84 is what Caldwell clocked at last year’s meet to garner 5th place and she, too, claims a seed time that surpasses what it took to win the event last year (1:02.69). But, 2015’s winner and runner-up, Cuyahoga Falls teammates Carly Hart and Hannah Gresser, respectively, are right behind Caldwell in the pre-meet standings, so look for a bitter battle to take this race down to the wall come finals.

Last year’s team runner-up, Cincinnati St. Ursula Academy, lacks any one individual top seed headed into the meet, but makes up for it with some pretty scary depth. The girls have 3 swimmers in the 200 freestyle and an incredible 4 in the 500 freestyle, all with potential point-impacting potential.

Mason holds the upper hand with relay qualifications, as the team from just outside Cincinnati holds 2 of the 4 top seeds in the form of the women’s 200 freestyle relay (1:34.83) and 400 freestyle relay (3:25.24), the latter of which they hold the quickest entry time by over 3 seconds.

Plus, Mason returns speed demon Ashley Volpenhein, who clinched last year’s 50 freestyle individual title with a scorching 22.84.  As a junior this year, Volpenhein has the top seed of 22.45 the only sub-23 freestyler by a mile. She already holds the Ohio state record in 22.35.

Volpenhein is also the queen of the 100 freestyle event headed into the meet, holding the field’s swiftest mark of 49.24, the state record and top time of the entries by over a full second.  Keep an eye out for both freestyle sprint marks to potentially be overtaken by the time the final is done and dusted.

Cincinnati Ursuline Academy, last year’s 8th place finisher, lost a huge asset in Sydney Lofquist, the now-USC Trojan who scored individual state titles last year in the 200 free and 500 IM events. Ursuline’s top seed this year is Megan Glass, a freshman slotted at #7 in the women’s 100 breaststroke in her entry time of 55.41.

Look for the men’s side of the competition to be a little more one-sided as the storied St. Xavier Swimming & Diving team out of Cincinnati looks to claim his 8th consecutive Ohio State Swimming title, which would mark the program’s 37th overall.

Just recently, the St. X men’s team once again claimed the Southwest Ohio District Championship crown, notching the most points scored at the event since 1999. This holds special significance as the district is arguably the most dominant in the state and approximately 45% of the individual swims at the state meet originate from the southwest district.

The St. X Bombers enter the meet in Canton holding 3 of the 4 relay top seeds, save for the 200 freestyle relay where Brecksville-Broadview and Columbus St. Charles hold swifter seed times.  The Bombers also carry in 3 individual top seeds.

An instrumental component of both St. X relays and individual events is junior Grant House, last year’s state title winner in both the 100 and 200 freestyle races.  House’s name may also sound familiar as the Cincinnati native was the anchor of the Junior World Record-setting U.S. 800m freestyle relay at last summer’s FINA World Junior Championships in Singapore. The relay went on to win a gold medal.

This year in Canton, House is keeping the 200, but is sliding the 500 freestyle into the schedule instead of the shorter 100 event. As far as the 200, House threw down a phenomenal performance last year with his 1:35.28 winning time.  Most recently at the 2016 Southwest Ohio Swimming and Diving Classic last month, House clocked a monster 1:37.91 200 freestyle to crush Hudepohl’s 1992 meet record of 1:39.43, perhaps foreshadowing what may take place come States.

House needs to drop a very doable .33 of a second to overtake Ohio legend Hudepohl’s record in the 200 to write his name into St. X and the state of Ohio’s history books.

Keep in mind, however, that Xenia junior Hank Siefert actually holds the top seed headed into the state meet, claiming a 1:37.84. As a sophomore at states last year, Siefert finished 8th in the 200 event with a mark of 1:40.66, so as a junior now, he’s no doubt found a way to dial into the speed that’s needed to challenge House for a possible historic state title.

Junior Luke Sobolewski is the other St. X swimmer holding a #1 seed headed into the meet, positioned as the only sub-49 100 yard backstroke of the incoming field.  The next closest competitor pre-race is Bomber teammate Justin Grender, who rocks a 49.17 seed time to set up a possible 1-2 punch in the event.

Sobolewski also leads the 100 butterfly event with his 48.78 seed time, the only sub-49 entry of the 24 men contesting the event.

As far as the youngest top seed class-wise, that role belongs to Brecksville-Broadview David Madej, who, at just a sophomore, scored the swiftest incoming 100 freestyle time with a 44.42.

This year Madej is also slated to swim the 50 freestyle individually, ranked 4th with a 20.71 headed into this year’s meet.