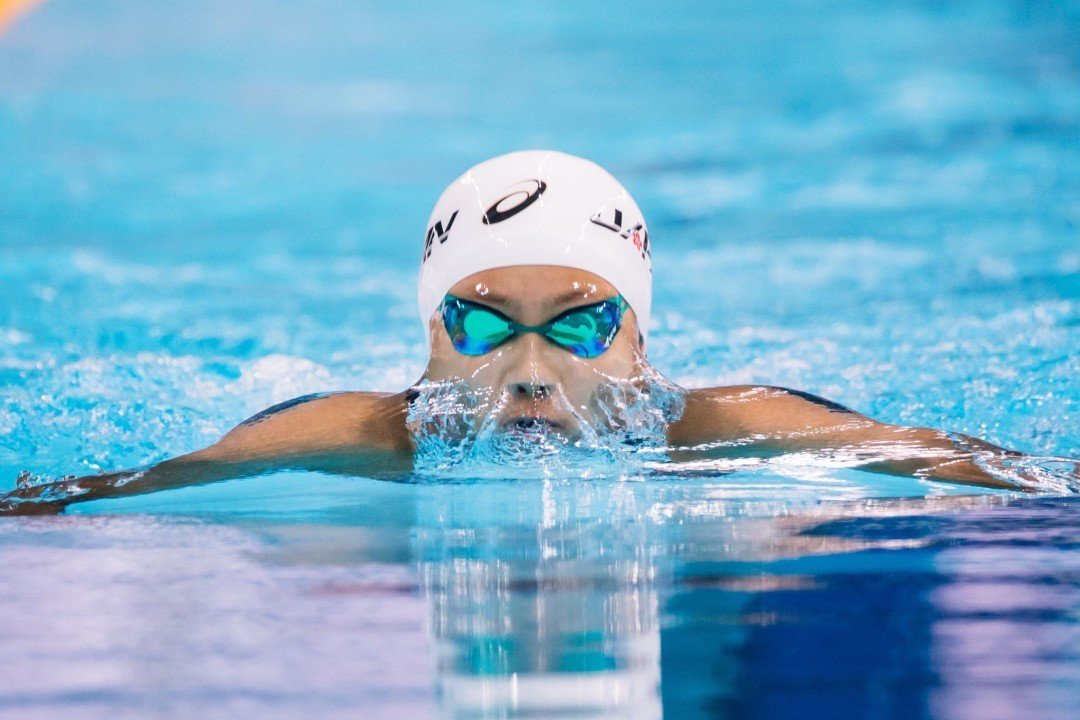 After a history-making prelims where 12 Japanese men went sub-50 in the 100 free, all but 3 of the semi-finalists performed the same feat, with the top 2 dipping beneath the 49-second threshold.

Just .12 of a second off of his National Record, Katsumi Nakamura led the pack with his swift 48.53 to put the field on notice. That’s Nakamura’s best time of the season, having already clocked a 48.55 at the Japanese Intercollegiate Championships.

Right behind Nakamura is Shinri Shioura, who maintained his runner-up seed just 2 tenths back in 48.73. Shioura actually kicked off a faster opening 50, register a 23.24 to Nakamura’s 23.38, but either wasn’t able to hold on the lead or intentionally backed off, knowing the speedsters have another race to go before the Rio roster is determined.

Club Wolverine Elite’s Junya Koga, the Japanese National Record Holder in the 50m backstroke sprint, is lurking as the 7th seed with his mark of 49.61, dropping about 3 tenths from his opening swim of 49.98 that had him 12th. Having just missed an Olympic spot in the 100m backstroke event, Koga may seek vengeance by giving everything he’s got into this 100m freestyle to make something happen.

Of note, this is the 2nd event we’ve encountered thus far where the Japanese Olympic-qualifying standard is faster than the actual National Record. Nakamura holds the record at 48.41 from last year, while a 48.16 is required, along with a top 2 finish in finals, to punch one’s ticket to Rio.

The women’s 100m freestyle semi saw 3 swimmers score a 54-pointer, led by former National Record Holder Miki Uchida. Uchida improved upon her 54.94 heat swim with a stellar 54.20 to dip under her season-best of 54.24 from the World Cup in Tokyo.

Rocketing her way up the field, jumping from 6th to 2nd from heats to semi’s is the National Record Holder in the event, teen phenom Rikako Ikee. At just 15 years old, Ikee already earned her spot on the Olympic roster in the 100m butterfly, but is well on her way to doubling up on that effort in this 100m free.

After registering a pedestrian 56.04 in heats, Ikee followed up today with a much more competitive 54.50, her 2nd-best of the season behind her 53.99. That outing puts just enough pressure on Uchida, but doesn’t leave Ikee completely worn out in order to take a run at lowering her NR even further. For her efforts this morning, Ikee scored a new school record.

This time around it was reigning 400m IM World Champion Daiya Seto who scored a 200m butterfly mark under the Japanese-dictated Olympic standard. After clocking a runner-up seeded time of 1:55.63 in prelims, Seto stepped things up a notch to collect at time of 1:55.00, the 2nd-fastest in the world this season. Per Japanese qualifying rules, Seto will need to replicate the Olympic standard and be positioned 1st or 2nd in tomorrow’s final.

The world leader in the event this season, 20-year-old Masato Sakai remained just about where he was from prelims, dropping his 1:55.37 mark to 1:55.40. With Sakai’s earlier morning swim, he signified the first swimmer to have gone into Rio-qualifying territory in time only. As with Seto, or anyone else, he’ll need to score a JPN Olympic Standard in the final, as well as finish 1st or 2nd in that same final in order to punch his ticket to Rio.

Sakai certainly has it in him, having finished just out of the medals in 4th place at last summer’s World Championships, claiming a best time of 1:54.24 in the process. Sakai already owns the top time this season in the world in the form of the 1:54.57 he scored at the Tokyo Intercollegiate Championships last September.

The 2012 Olympic bronze medalist in the event, 31-year-old Takeshi Matsuda, who holds the National Record in this event, is not going away. He is positioned 4th headed into tonight’s final with a modest 1:57.30, but this experienced swimmer knows how to race ‘just enough’ in the opening swims and then turn it on when it really counts. Look for him to give the field a run for a top-2 spot tomorrow night.

Something you don’t see everyday in a 200m breaststroke is a 3-way tie for 8th, but that’s exactly what transpired tonight in Tokyo. Rintarou Ohkubo, Ryo Tateishi and Mamoru Mouri collectively touched the wall in a tie of 2:10.77 to all sit in the “8th” position after semi-finals, requiring a swim-off between the 3 for the last 2 lanes in tomorrow night’s final.

Starting at the top, however, is one of the primary components of the Japanese breaststroking machine, Ippei Watanabe. Setting himself up nicely with a killer time of 2:08.83, Watanabe eased off slightly to charge to the wall tonight in a time of 2:09.46, still under the Rio-qualifying mark set by Japan. As mentioned, the Japanese qualifying procedures dictate that Watanabe will need to perform this same feat in finals, while also claiming the 1st or 2nd place in the final in order to punch his ticket to Rio.

Yasuhiro Koseki is not giving up on his Rio hopes, coming in as the 2nd-fastest swimmer of the field in 2:09.98. Immediately behind him is 33-year-old multiple Olympic gold medalist Kosuke Kitajima, sho stopped the clock tonight at 2:10.16 to remain in the hunt.

Although Kitajima surpassed the Japanese Rio-qualifying mark in the 100m breaststroke event earlier in the meet, he did so in semi’s, so he fell short of a spot on the Olympic roster in that event. Kitajima will no doubt be looking to swim as fast as possible in this 200m breaststroke as his last hope of earning a 5th Olympic bid in an individual event.

As a nod to how weak on the speed spectrum backstroking is this year for Japanese women, no finalists dipped beneath the 1:00 threshold to qualify for Rio in the event. 59.85 is the Olympic standard put forth by the Japanese Swimming Federation, yet our winner tonight, Natsumi Sakai, registered a time of 1:00.12, missing the mark by .27 of a second.

As a consolation to Sakai, however, is the fact that she is just 15 years old. As such, Sakai garnered some tremendous, high-pressure racing experience and clocked a new Japanese junior record to boot. With her young age, Sakai at least gives the nation hope that it can steadily improve in this stroke discipline on the women’s side to one day soon keep up with the international competition, one that clocks times in the 59-mid range all day long.

A couple of 2:06 200 butterflyers set off the fireworks for tonight’s session, as Japan now has 2 women representing the nation in Rio in the grueling event. Reigning World Champion in the 200m butterfly, Natsumi Hoshi, led the field with a massive 2:06.32, about 2 tenths off of her previous season-best of 2:06.56 from the Konami Open in February.

Hoshi now sits as the fastest swimmer in the world in the 200m butterfly by a super small margin with her 2:06.32 mark. Hoshi is ranked just ahead Spain’s Mireia Belmonte, who sits as 2nd in the rankings in 2:06.34.

Also making her mark in the event final is Suzuka Hasegawa, who was the 2nd swimmer to clear the 2:07 threshold in the race. Hasegawa had already earned a time of 2:06.85 from the semi’s of this event and remained in the same ballpark, settling on 2:06.92 to win silver in the final. That outing also earns Hasegawa a spot on the Japanese Olympic roster, one that continues to grow slowly, given the super competitive Rio-qualifying marks conveyed by Japan.

In a whirlwind of an event where the favorites seemed primed to swim away with their Rio roster spots, a major shake-up transpired in Tokyo. After the women’s 200m IM semi-final, the usual suspects of Kanako Watanabe, the 2015 World Championship silver medalist and current Japanese National Record Holder in the event, along with Sakiko Shimizu, the 5th-fastest in the world this season, appeared to be headed toward qualifying for the 2016 Olympic Games.

But Miho Teramura had other plans entirely, as she laid waste to her semi swim time of 2:12.02 en route to winning gold in an incredible 2:09.87. Her performance rockets Teramura from 13th in the world all the way to 2nd, sitting only behind Hungary’s Iron Lady, Katinka Hosszu.

Runner-up tonight was 15-year-old Runa Imai, another star-in-the-making who annihilated her semi swim time of 2:12.15 to score a mark of 2:10.76, her personal best by over a second. Her swiftest outing prior to tonight was the 2:11.45 she rocked at the World Cup Tokyo, but tonight’s effort now shifts young Imai to 6th in the world rankings….at just 15 years old. Also, with her time falling under 2:11.03, Imai has qualified for an Olympic roster spot for her nation of Japan.

Japan’s official results denote Imai’s as a new World Junior Record, but this technically isn’t the case. FINA still attributes the current World Junior Record to Turkey’s Viktoria Gunes (2:11.03) from the World Junior Championships in Singapore last summer. However, that time was preceded by China’s Zhou Min, who registered a new WJR of 2:10.22 back in 2014.

No Japanese girl under the minute in the 100 back. I thought that only France among the best swimming nations had that particularity.
Very strange to see Japanese women’s backstroke so weak in that olympic year.
Only consolation as you wrote it: Sakay is still very young and is probably programmed to peak in Tokyo 2020 like many other young Japanese talents.

Hoshi will play once again the medals in the 200 fly in Rio.

The same is true for Germany and Italy. Both overall have a better depth than France but not the same medal potential.

Won’t Sakay be selected for the medley relay, or does Japan not have a team qualified?

Looks like Fina doesn’t like the world junior records made by Chinese swimmers. Not the first time they don’t consider some times. And not only in China.
Maybe no doping controls at these meets as reason? No idea.

It is interesting that you claimed you had no idea, but then proposed all these wild theories why FINA doesn’t like the world junior records made by Chinese swimmers.

You have a personal problem with BOBO don’t you? Smile, laugh and move on. Life is a gift – enjoy it.

I did smile, laugh and move on.