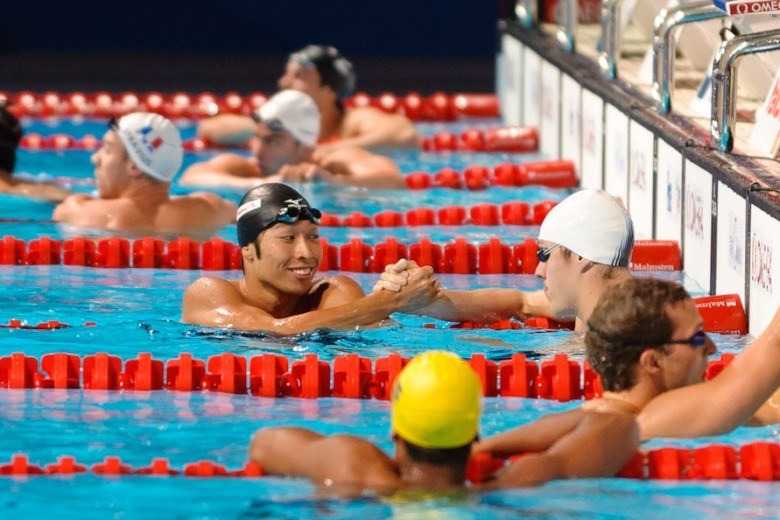 As with prelims, we’re still waiting on our first female swimmer to dip beneath the minute mark in the 100m backstroke, but at least the number of competitors sitting right at a minute increased between the 2 sessions.  Miyuki Takemura held top seed of 1:00.68 entering tonight’s semi-final, with only one other swimmer, Natsumi Sakai (1:00.81) following suit with the 1:00 theme.

The women retained their 1-2 standing through tonight’s semi-final, as Takemura took off over a tenth to clock a 1:00.50 while Sakai shaved a little more off her morning mark with an evening time of 1:00.56. Of note, Sakai is just 14 years old and her mark registered as a new junior Japanese record.

With no clear stand-out, the final is truly anyone’s race at this point, but, someone will need to make a major move to clinch an Olympic berth with the Japanese Olympic-qualifying time sitting at 59.85.

What a difference a day makes, as the key players significantly stepped things up between their morning and evening swims in the 200m butterfly event. Whereas our top seed out of prelims was Nao Kobayashi‘s mark of 2:10.58, our swiftest swimmer from semi’s is now 16-year-old Suzuka Hasegawa, who cranked out a mighty 2:06.85 to lead the field. That immediately boosts the teenager to 4th-fastest in the world so far this season.

Also notching a time within the world’s top 10 is the reigning World Champion Natsumi Hoshi. She dropped almost 4 solid seconds from her 2:11.53 outing to stop the clock at 2:07.55 tonight, the 7th quickest internationally this season. She already owns the world’s 3rd-fastest time of the season with the 2:06.56 she registered at February’s Konami Open. Hoshi’s gold medal-winning time of 2:05.56 from Kazan is also a testimony to how fast Hoshi can move when big rewards are at stake.

Although this is still semi’s, both Hasegawa and Hoshi scored marks beneath the Japanese Olympic-qualifying standard of 2:07.82.

The 200m IM event remains a highly-contested affair with the top 3 seeds all within about a second of one another Our leader after prelims, Miho Teramura, now sits as the 3rd-seeded swimmer, touching in a time of 2:12.02 to drop about 5 tenths from her morning outing (2:12.51).

Bouncing up 2 spots is the World Championship silver medalist in the event Kanako Watanabe ,who is still a ways off her Kazan mark of 2:08.45, but now finds herself in the pole position after having clocked a night swim of 2:11.58. Right behind her is the stealthy Sakiko Shimizu, who earned a time of 2:11.69.

Shimizu holds Japan’s fastest time in the event, the 5th-fastest in the world, from her outing at the Konami Open in February. At that meet, Shimizu rocked a time of 2:10.51 to take the meet title and position herself in the upper echelon of IMers around the world.  That performance was swifter than what she produced in Kazan, where Shimizu settled for a 10th place finish overall in 2:11.03, so the 24-year-old’s performances are following an upward trajectory, trending toward a possible showdown with Watanabe.

A mega swim from powerhouse athlete Kosuke Hagino just punched his ticket to Rio in a 2nd event at these Trials. Doubling up on his dominant win earlier in the men’s 200m IM, Hagino scorched the field with a monster 1:45.50 200m freestyle tonight, rocketing to the #1-ranked performance in the world in the process. Hagino’s outing tonight surpasses the previous world best of China’s Sun Yang, sitting at 1:45.79 from Chinese Nationals last fall. The 2 men are now the only studs to have clocked sub-1:46 swims thus far this season.

For perspective, Hagino’s time tonight was just .27 of a second off of his own Japanese National Record, which is represented by the 1:45.23 mark he registered for the surprise win over Sun Yang at the 2014 Asian Games. With Hagino absent from the World Championships, we missed out on a potential Hagino/Sun showdown, but perhaps Hagino’s swim and the fact he overtook the Chinese swimmer in the world rankings is giving us a sneak peek at the Rio final.

Splits for Hagino were 51.61/53.89 to get the job done in Tokyo tonight and outperform the next fastest competitor in the field, Takeshi Matsuda. For his part, 31-year-old Matsuda still performed well, as the 200m butterfly specialist steadily improved his time throughout the stages of competition. Matsuda’s prelims swim was 1:48.29, then 1:47.19 in semi’s and finally a 1:46.88 for the runner-up spot behind Hagino tonight.

Unfortunately for Matsuda, he needed to drop another .78 of a second to match the Japanese Olympic-qualifying standard of 1:46.10, a mark only Hagino surpassed in the final. Of note, Naito Ehara was only .01 of a second out of the silver medal position, stopping the clock at 1:46.89.

The fact that a nation’s sprint freestyler/butterflyer easily takes the 200m freestyle win at a championship meet says something about the state of the event within the country. Such was the case tonight, where 15-year-old Rikako Ikee, who already lowered her own Japanese National Record in the 100m butterfly event earlier in the meet, clinched the 200m freestyle in with a time of 1:57.39. That scores a new Japanese junior national record for the teenager.

Somewhat surprisingly, Ikee was just .02 of a second off of the national record in this event as well, but fell short of the 1:56.82 Olympic-qualifying standard. The women’s 200m freestyle is the first event of the meet where the JPN Olympic threshold is faster than the national record in the event. Also, as fast as the swim was in light of the fact Ikee is just 15 years old, the time sits well out of the world’s top 10 marks.

Nevertheless, Ikee is more than likely participating in this event to secure a spot on her nation’s 800m freestyle relay. Silver tonight goes to Chihiro Igarashi in 1:58.06, followed by Sachi Mochida in 1:58.58 for 3rd.

A trio of 1:06’s highlighted the women’s final, with all 3 under the Japanese Olympic-qualifying standard of 1:06.87. Kanako Watanabe led the charge with a stellar 1:06.57, less than a second off her National Record of 1:05.88. That points to at least two 1:06-mid marks for 19-year-old, as she’s already ranked 7th in the world with her time of 1:06.49 clocked at last fall’s Japanese Intercollegiate Championships.

Joining Watanabe on the Olympic roster is runner-up Satomi Suzuki, who touched in 1:06.72 tonight to slide under the Olympic standard by more than a tenth. The 200m breaststroke National Record holder, 27-year-old Rie Kaneto also got on the podium, finishing with a time of 1:06.79, her 2nd-fastest of 2016. Her swiftest was dropped back in February (1:06.58) while representing Japan at the Aquatic Super Series in Perth.

After having clocked a time of 53.27 at the Tokyo stop at the World Cup last October, most would have expected backstroking mainstay Ryosuke Irie to fire off a sub-53 time of some kind, especially if he wants to play with the likes of Aussie Mitch Larkin Frenchman Camille LaCourt. Instead, Irie swam a solid, but not spectacular 53.26 to clinch the gold tonight and comfortably register under the Japanese Olympic standard of 53.49.

Tying that standard is Junya Hasegawa, who charged to the wall in the silver spot tonight in 53.49. Most would think that would be enough to qualify Hasegawa for the 2nd Olympic roster spot, but only the Japanese Swimming Federation will tell us for sure.

Painstakingly close to the qualifying standard is Junya Koga, the Club Wolverine Elite-trained 28-year-old who touched in 53.57 for bronze. Koga actually hit the 53.49 standard with his swim at the Tokyo World Cup, a mark which sits as the 10th-fastest in the world this season, but wasn’t able to turn it on tonight.

My only question is why would the Japanese federation set these Olympic standard times so fast, even faster than several of their current national records? What is the point? Could someone please elaborate? Thank you.

So far Japan & soon Aust are using the full program inc semis. It makes a difference .

The Japanese Olympic standards are not really tough. The only areas where their qualifying times are faster than their national records is where they are very weak like the women,s 200 free. The Japanese women,s 200-1500 frees have been very weak for a looong time and before rikako ikee,s emergence, the 50 and 100 frees were also weak. Also the Japanese women are weak in the backstroke both the 100 and 200 backstrokes so I suspect that the qualifying times in backstroke will also be quite tough.