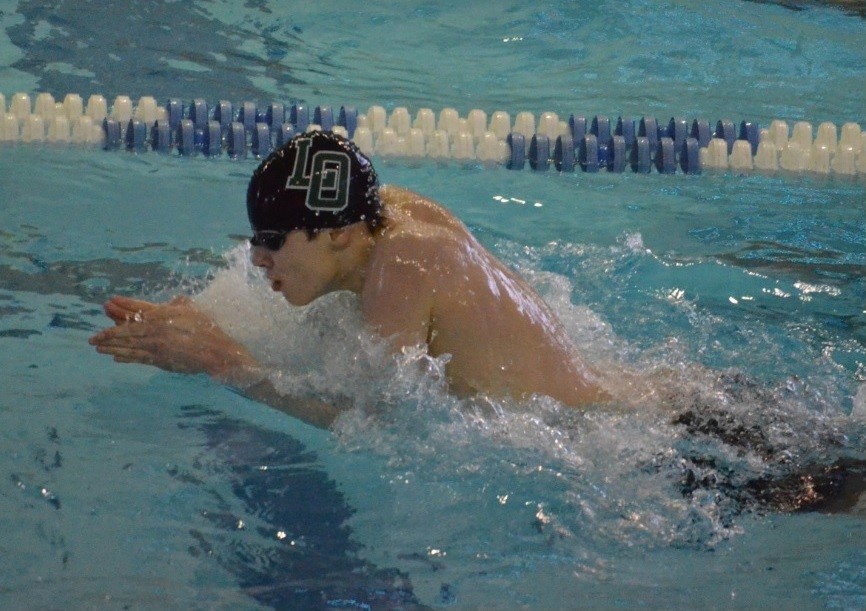 Oakland continued to cruise to a third straight victory in the men’s and women’s Horizon League on Day 3. The Grizzlies now hold a commanding lead over second place Cleveland State (Men’s) and Milwaukee (Women’s).

Oakland won seven out of the twelve contested events, setting five league records along the way.

Aschan picked up her second win of the meet, this time setting a league record in the process. Aschan swam 4:13.46, an improvement of her own record of 4:16.84 from a year ago. The swim was also a six second improvement ofr Misiewicz over a year ago when she finished fourth.

Much like a year ago, Oakland was able to put four swimmers into the championship final to begin their separation from the rest of the field.

With defending champion and league record holder Jorden Merrilees nowhere to be found, Wayne State’s Mitchel Stover stepped up as the best returner and won. Stover’s time of 3:50.24 was five seconds back of Merrilees record. He built his entire lead in the front half, swimming 1:48 on the opening 200, before Halverson swam him even on the back half.

This was the weakest event of the night for team leader Oakland, with just one top eight swimmers to Cleveland State’s two.

Emily Hayhow bettered her 2015 winning time by nearly two seconds, demolishing the previous league record in 53.15. The record had stood at 54.77. Holly McNamara also swam under the previous record in 54.63.

Team leader Oakland pushed their advantage over 100 points with two finalists in the event, but this was also a good event for Illinois-Chicago with two as well.

Cleveland State’s Philip Sikatzki picked up the first of two event wins on the night, breaking a league record in 45.90. That marked more than a second improvement over his own league mark used to win a year ago. It appears Sikatzki also has an heir apparent in freshmen teammate Golczyk, who was also under the record in 46.73.

Despite finishing top two, Cleveland State was only able to pull slightly closer to Oakland, as the Grizzlies grabbed the next two spots in the race. Sikatzki’s time will also likely qualify him for the NCAA Championships.

Oakland’s Nikki Flynn broke the five year old league record, becoming the first Horizon league swimmer under 1:48 on her way to 1:47.54. This event actually was an exact mirror of last year’s top three. All three swimmers were able to improve on their 2015 times, evidence of how rapid improvement is in this league.

It was not surprising that after their easy win the 800 freestyle relay, Oakland was able to put four swimmers in the top eleven in this event.

Despite no league record in this race, the Men’s 200 Free was another event that showed marked improvement over a year ago. The top three swimmers would have beat last year’s champion.

Kiviluoma made a smart switch from the 100 Butterfly, where he placed fifth a year ago, to win this race in 1:37.64. That time nearly matched his opening night leadoff of 1:37.26 for Oakland.

Oakland’s Rachel Waite leapfrogged her teammate Martin to win a close race in the 100 breaststroke (1:01.85). The two were in a dead heat halfway through the race, but Waite had a little bit more to close. They actually trailed Green Bay’s Racheal Weiland slightly, but Weiland couldn’t finish and ended up fifth.

Oakland got a fourth place finish as well, as their lead ballooned to 160 points.

Devon Nowicki of Oakland continued his great conference start with a bang, setting a league record in 52.48. That time was a half second improvement over the 2009 league record. Nowicki’s time also puts him in a good position to qualify for the NCAA Championships in this event.

The event will likely get even faster in coming years. Nowicki, along with four other swimmers in the final, are all in their first year.

Bentley was able to knock off defending champion Friederick with a slightly faster time than Friederick won with a year ago. Sola Galindo, a transfer from Brenau University, helped to bolster the Grizzlies once again against two Milwaukee finalists.

Oakland saw it’s lead back down to 130 points with two events to go.

Sikatzki won this double for the second year in a row, as well as setting his second league record in the process. His time of 46.74 was an improvement over his 46.98 from a year before. Huch of Oakland was also able to finish in the top three in the same two races.

Ferrara was also in third for the second year in a row. Cleveland state cut into Oakland’s lead with three finalists in the event. It was the closest they would get the meet all night.

Klemm jumped from fifth a year ago to capture the league championship. This was the first ever win for the sophomore. Green Bay was also able to pick up a 5th place finish from Tanner Nordlund.

All three top finishers were able to clear the NCAA Zone Championship standard in the event.

Oakland got a little heat from Wright State but ultimately coasted to a victory in 3:41.04. The two teams were separated by just .4 after backstroke, when breaststroke champion Waite (1:01.25) staked the Grizzlies a two second lead. Wright State’s Hayhow (53.43) would make up most of the difference, but Oakland’s Molly Horren left no doubt with a 49.01 anchor leg.

Oakland and Cleveland State traded leads three times in a nailbiter. Ultimately it was Oakland that got the touch in 3:10.42. Cleveland State got a big lead from yet another league record from Philip Sikatzki, who swam 46.41 in the opening 100 backstroke. However, 100 breastroke champion Devon Nowicki of Oakland would unleash a 51.98 split on the following leg to put Oakland into a narrow lead.

Cleveland State had the luxury of putting 2nd place 100 butterfly swimmer Szymon Golzsyck on the fly, and his 46.28 split gave them almost a full second lead. Jeramiah Morren did just enough on the final 100 (43.09) to give Oakland the victory.

Oakland’s time was also a league record by more than three seconds.

They took a great photo of Devons breaststroke it is on the Oakland University website for student athlete of the week. Contact assistant coach Shawn for the name of the photographer. His email is [email protected]