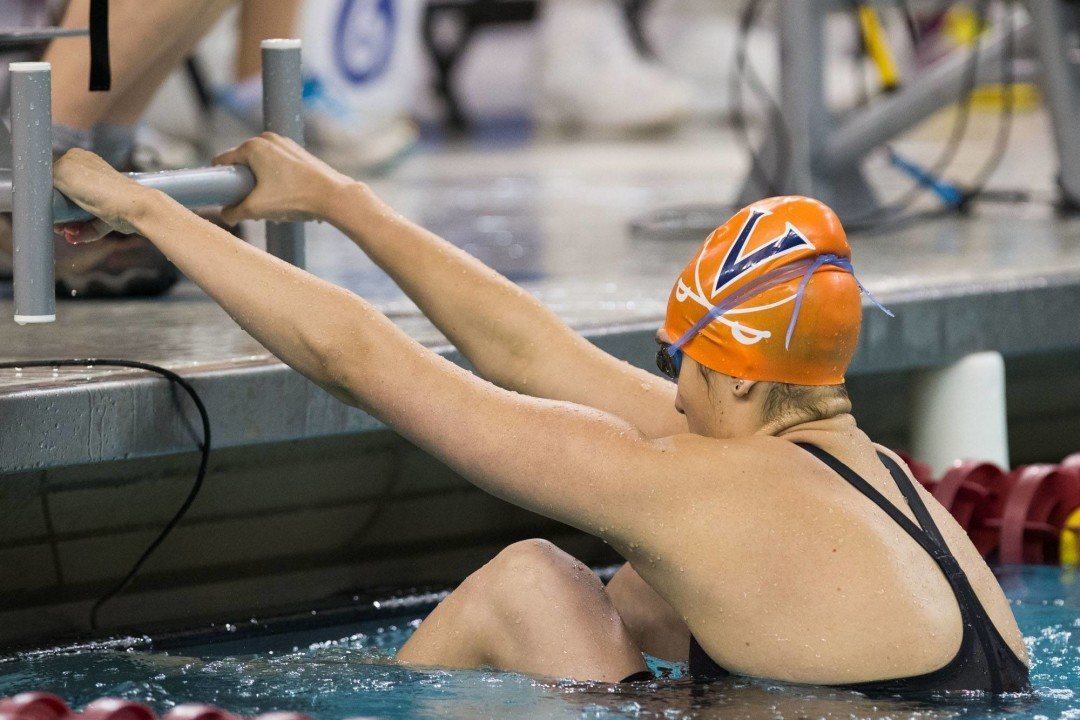 The Virginia Cavaliers begin their chase for a 9th-straight women's swimming & diving ACC title on Wednesday in Greensboro. Archive photo via Tim Binning/TheSwimPictures.com

The Virginia Cavaliers begin their quest for a 9th-straight ACC women’s swimming & diving title on Wednesday in Greensboro, Connecticut with the 200 medley and 800 free relays, along with the women’s 1-meter diving final.

Note that men’s diving competes during the women’s combined meet; we won’t report those diving results in our recaps, but will round them up after the meet’s conclusion.

The women’s 200 medley relay was one of the most anticipated in the entire ACC women’s championship meet, with the Virginia and Louisville women both contenders for NCAA titles next month. The result lived up to the hype, with the Cardinals topping the Cavaliers by a margin of 1:35.43-1:35.57. Those times would’ve placed 2nd and 3rd, respectively, at last year’s NCAA Championship meet.

Both teams were dominant on their respective stars; Virginia got a huge lead on the opening leg with a 23.98 from Courtney Bartholomew in the 50 back, while Louisville’s Kelsi Worrell split 22.42 to make that margin back.

The top 4 teams, including UNC in 1:37.04, earned NCAA Qualifying Standards.

North Carolina State senior Rachel Mumma took the title in the women’s 1 meter, finishing at the top of the medal stand after  fourth place finish last season. Her performance rocked the competition, coming in 23 points ahead of second place with 331.85.

Her win marks a comeback for the NC State’s women’s diving program: their first ACC title since 2010. Until recently, North Carolina’s dive program was much stronger, and historically they hold more total ACC diving titles than any other school. This win is the tenth 1 meter win in the history of the program to match ten 3 meter wins.

A pair of Miami underclassmen took the silver and bronze medals, scoring a total of 55 team points for the Hurricanes. Wally Layland, a sophomore, finished with 318.65 points and Carolyn Chaney, a freshman, scored 318.05.

The 800 free relay shaped up to be another exciting race all the way through the finish, when Jen Marrkand of the University of Virginia just outswam Natalie Labonge of North Carolina State to take the title and the ACC record.

The UVA team was the first in ACC Championships history to go under 7:00, clocking 6:59.98 to break their own ACC record from last season. North Carolina State also came in under the mark with 7:00.53, but they just weren’t fast enough. The relays would have placed 3rd and 4th at last year’s NCAA meet.

The old ACC record was a 7:00.93 set by Leah Smith, Hanne Borgerson, Kaitlyn Jones, and Cece Williams. Smith was the only returner to the relay this year.

The most exciting split of the race was a flat-start 1:43.15 from Leah Smith, which would have been quick enough for fourth place at NCAA Championships last year. And, with both Simone Manuel and Missy Franklin out of the picture this year, that leaves Stanford’s Lia Neal as Smith’s main competition going into the meet next month.

Way to go Wolfpack Women! 3 school records, 2 “A” cuts, 1M champion and a 9 second drop in the 8 FR Relay from last year.