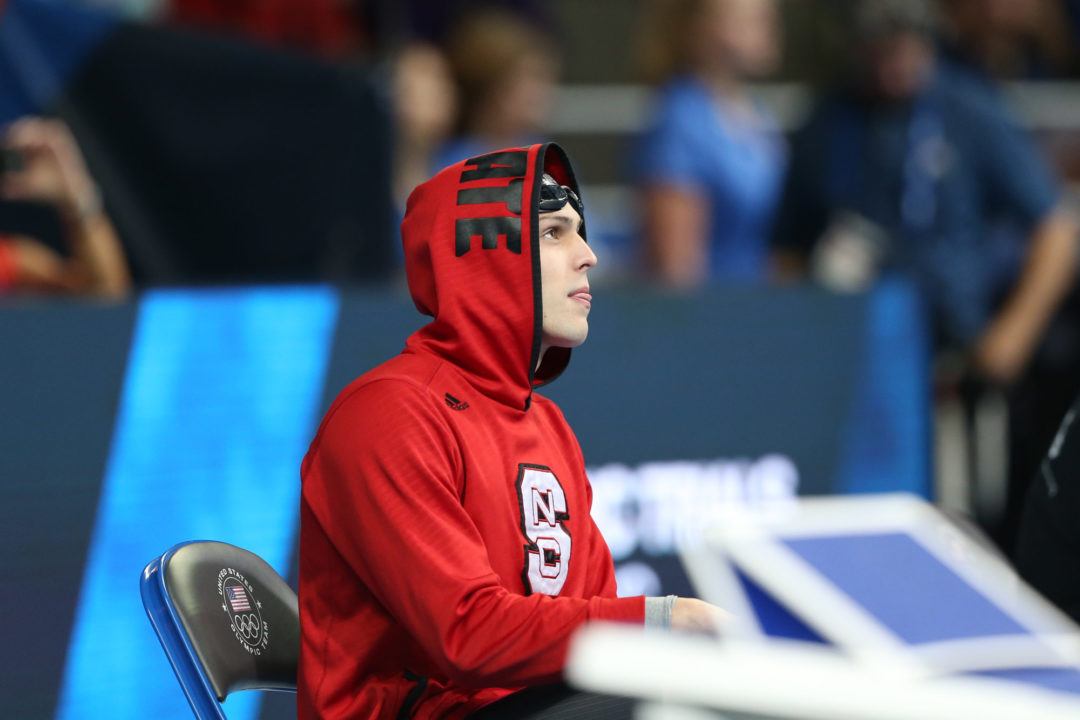 Ryan Held and the NC State Wolfpack are on fire. Current photo via Tim Binning/TheSwimPictures.com

Some big changes since we last checked in on the men’s side.  As we’re in the middle of invite season, we won’t overly reward or punish teams who have or haven’t had their invite yet (Cal and Texas have yet to compete in their midseason meet), unless an invite performance was truly exceptional.  Since our last rankings, there have been some big-time shifts in the ranks, with a a new team at #1.

Dropping the Golden Gophers three spots based on the top-end speed we’ve seen from other teams.  Bowen Becker is having a great year, but Minnesota needs to find some more speed to qualify relays for NCAA’s.

Good finish to the fall.  Mark Bernardino continues to do great things with the distance group, and Nils Wich-Glasen is top five nationally in both breaststrokes.

Brandon Fiala was one of the breakout swimmers of the 2015-16 NCAA season, and he’ll have help this year.  Robert Owen will continue to hold down the fort in the backstrokes and IMs, and sophomore Norbert Szabo is proving to be an important piece.

The Buckeyes looked solid in their fall invite, with Josh Fleagle coming back strong off his redshirt season (43.0/1:34.9).  They’ll need him to take the next step to be competitive in relays in March.

Not sure what to make of their finish to 2016.  The Volunteers finished a lackluster 5th at NC State’s invite, and are bringing a very limited squad of swimmers to U.S. Nationals this weekend.  Sam McHugh (1:45.1/3:42.5 IMs) has been strong, though.

We’re going to hold off on completely reevaluating these teams until invites are over (all are competing in Austin this weekend), as plenty of questions remain for both squads.  However, through one night, there’s signs of optimism for all three; the Cardinal won the 800 free relay going way (6:15.58), Dylan Carter posted an impressive 1:32.6 leadoff leg, and the Wildcats blew through the NCAA ‘A’ Standard in a 200 medley relay time trial, in large part thanks to a blistering 19.81 fly leg from Chad Idensohn.

Blew through Virginia and Penn State since our last ranking, but tough to judge at this point; Michigan is an exciting young team, but it’s unclear if they have the firepower individually to do well in an NCAA format.  We’ll know more after his weekend; the Wolverines are amping up to compete with a loaded Georgia Invite field.

Sprint freestyles were a bit of a question mark, but the 19.8 flat-starts from freshmen Mark Chernov and Andrej Barna at their fall invitationals gives the Cardinals more promise.

Looked pretty good in their dual meet victory over Alabama; the Tigers have the right pieces to go toe-to-toe in any dual meet.  We’ll know more after their performance at the Georgia Invitational this weekend.

Missouri has been known to put together some fast fall meets in the past, but these results were exceptional.  Fabian Schwingenschlogl (51.07), Michael Chadwick (52.62), and Eddie Mapel (52.73) currently sit 1-2-3 nationally in the 100 breast, and Andrew Sansoucie posted a nation-leading 44.86 100 butterfly.

Fell to arch-rival Auburn in a dual meet, but man, are they shaping up to be  fun to watch at NCAA’s.  Already have four guys at 43.3 or better in the 100 freestyle from a flat start.  Luke Kaliszak, arguably the best underwater kicker in the NCAA, keeps getting better above the water, as well.

Still undefeated in dual meets, but the real question is if the Hoosiers can maintain momentum this weekend at U.S. Nationals.  Blake Pieroni is coming off a great performance at the inaugural College Challenge, where he dropped a then-nation-leading 1:33.43 in the 200 freestyle.

Caeleb Dressel is #1 in four events nationally, after his impressive 1:42.77 200 IM.  He almost certainly won’t swim it at NCAA’s (right?  Right?!?!), but it makes you wonder what he could put together fully-rested.  He may need to keep training breaststroke, though; despite already having their invite on the books (unlike many other teams), the Gators still don’t have a breaststroker who sits top 50 nationally in either event.

The ‘Dawgs are on a roll heading into their annual fall invite, taking down Florida, Wisconsin, and Missouri since out last rankings.  Plenty of depth in every stroke, but sprint freestyles remain an issue; Georgia doesn’t have a single 50 freestyler in the top 100 nationally, and nobody inside the top 50 in the 100.

The Bears have been laying low this fall, with their only officially-scored meet coming against the University of Pacific,  but look for some big swims from Ryan Murphy and company this weekend.  Keep an eye on the Bears’ breaststroke group.

No need to panic; unless things are worse than what is being reported out of Austin, the Longhorns are still the favorites in March.  However, since these power rankings take into account which teams are the most complete and performing well at this moment, Texas needs to be dropped a spot.  We still haven’t seen their full squad–Ryan Harty and Will Licon have been limited by injuries–and it showed in their loss at the hands of NC State.

Well, we didn’t think we’d have a new #1 anytime soon, but between beating Texas and some more young talent coming through (freshmen Jack McIntyre and Coleman Stewart, to name two) to add depth, the Wolfpack have taken the top spot.  Anton Ipsen has reached a new level this year, as well.

Tx will thrash NC State at NC’s. Write it down.

Jack Mac! They miss you at EEX. So happy to read about your continued success.

Thx for the lowdown so far in the season, Morgan. Any word on your Cardinal, Connor Black? Is he healthy and swimming this season? He’d be a significant piece to the sprint relays….