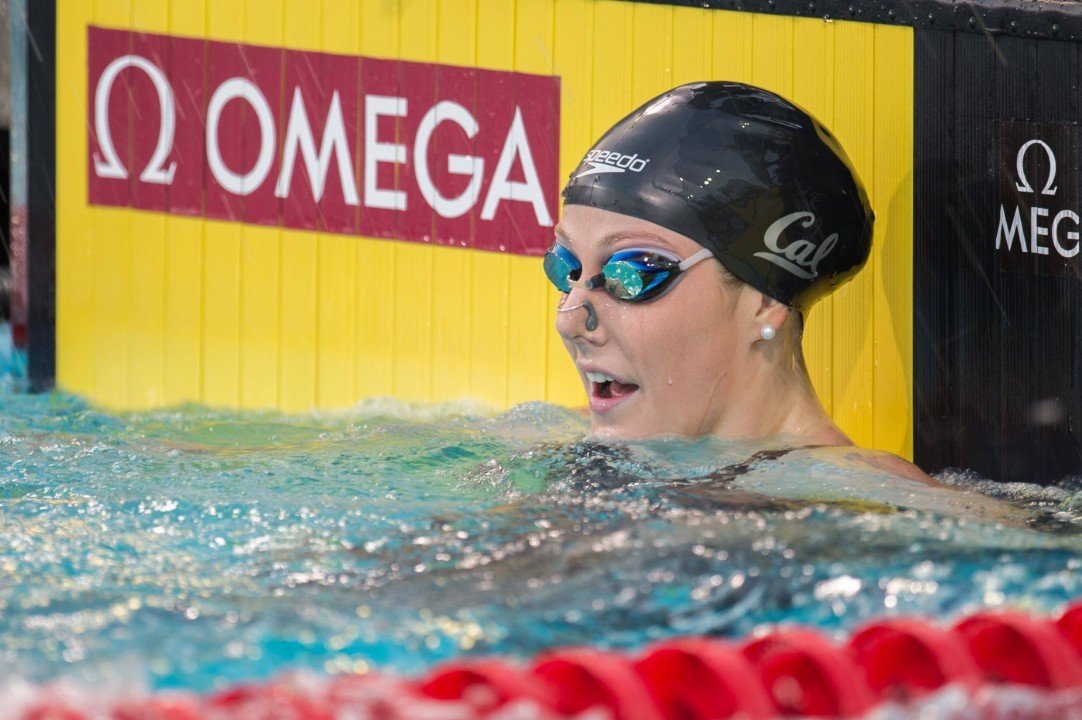 Wisconsin was the only team this morning with all four swimmers splitting under 22 seconds in the 200 freestyle relay. They will be the top seed coming into the final, but don’t count out Georgia, Stanford, and California.

Leah Smith broke the NCAA record to earn the top seed in the 500 freestyle this morning with her time of 4:30.37. She broke Cierra Runge’s record while she was standing behind the same lane waiting for her own swim. It didn’t appear to affect her, however. Despite qualifying third at 4:35, she looked too smooth. There were no kicks off any of her walls, and she didn’t push the front half like she did at the Pac-12 Championships.

In the 200 IM, California will fill out the middle of the pool with Missy Franklin, Liz Pelton, and Celina Li. Missy Franklin was challenging Caitlin Leverenz’s American record through the first 100 and fell off slightly during the breaststroke leg. Leverenz has a really strong breaststroke, so it will be a challenge for Franklin, but I think she is capable or breaking that record if she has a great swim.

The 50 freestyle will be a shootout between America’s up-and-coming sprint stars, Simone Manuel and Ivy Martin. Manuel has the top seed at 21.54, and is dangerously close to breaking the USA Swimming 17-18 NAG record in the event of 21.49. Ivy Martin has been very consistent, leading off the relay in 21.62 and posting a 21.59 individually in the 50 freestyle.

The 400 medley relay is Stanford’s event to win. Virginia put up a great time this morning with the fastest backstroke and breaststroke spits of the day, but Stanford still has a lot in the tank. They are seeded third, but Simone Manuel cruised through the anchor leg at 47.72 to put them in third. She has already been 45.8 in a relay this year. Cutting two seconds on that leg alone will put them in a position to break the American/US Open/NCAA Records.

Virginia has some room to improve as well though. Courtney Bartholomew lead off with her time of 50.88, but if she can get back down to her time of 50.01 from earlier in the year, they will challenge Stanford and the rest of the final as well.

is there a livestream?

. . . And UVA swam “B” swimmers in fly and free who will likely be switched out tonight.