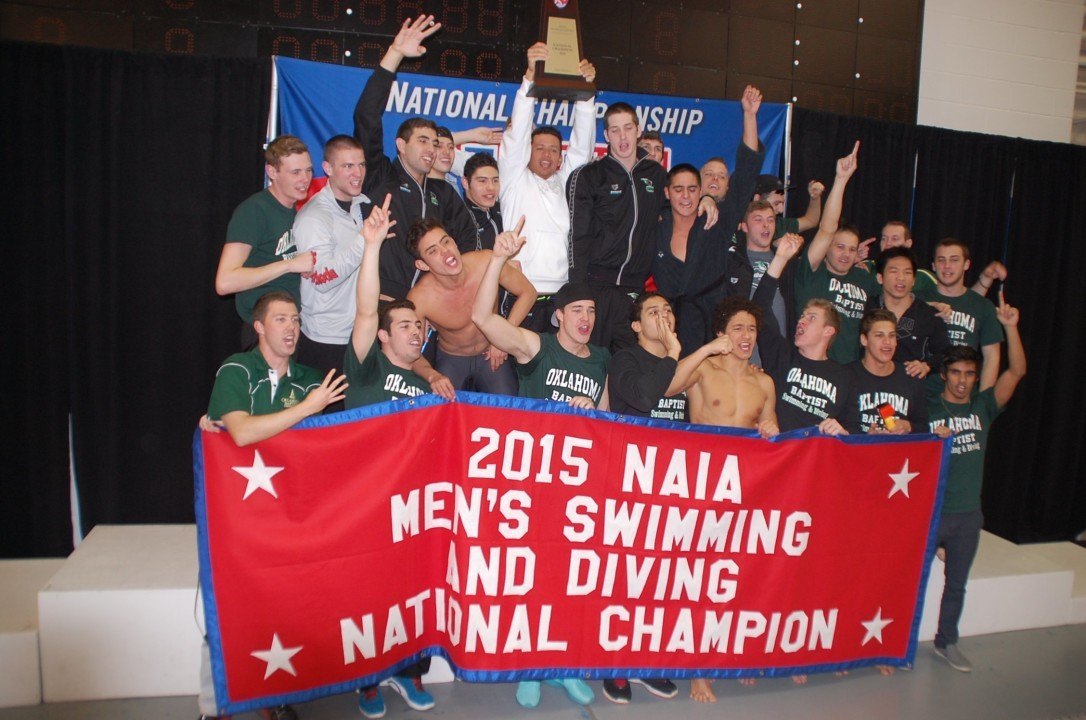 For the fourth year in a row, the Oklahoma Baptist Bison earned the team title at the NAIA National Championships. Current photo via Anne Lepesant

The seniors of Oklahoma Baptist have never lost a national championship; the Bison men have won the NAIA team title every year since the program’s inception four years ago. 2015 will be their last, however, as OBU is transitioning into Division II of the NCAA beginning with the 2015-16 season.

There were several interesting story lines going on in the team competition this year. Olivet Nazarene University, after finishing 2014 a mere 5 points ahead of SCAD Savannah, rocketed to a 172.5-point differential this year. SCAD finished solidly in third, repeating their position from last year. After fourth-place Concordia University of Irvine, six teams were jockeying for position: St. Andrews University, University of the Cumberlands, Union College, Wayland Baptist University, WVU Institute of Technology, and Biola University. In the end, Cumberlands and Union tied, only 13 points behind St. Andrews. WBU beat WVU Tech by 1, and Biola was only 11 back. In general, the 2015 field was much deeper than it had been in the past.

Saturday’s events began with a repeat from SCAD’s Joel Ax (15:32.23) in the 1650, making two years in a row that the sophomore has swept the distance freestyle events. Union’s Cameron Donaldson had a strong surge at the end to finish second with 15:33.33. Lasezlo Perlaky of Concordia went 15:59.01 for third.

The 100 free was arguably the most exciting race of the meet. Two-time defending champion and current record-holder, Daniel Ramirez of OBU, rocketed out to a .2 lead over the field at the 50 with 20.55, but leading into the 75 wall it wasn’t clear that he would emerge with his third straight national title. But Ramirez is a tough competitor and he dug in and got the job done, finishing with 43.79, 6/10 ahead of the next finisher.

OBU’s Fernando Morillas, swimming out of lane 5, destroyed the meet record, blasting a 1:56.96 for the win. Morillas was out in a speedy 56.2 but still had plenty left in the tank, coming home in a pair of 30s to the roars of the crowd. Teammate Calvin Price picked up the silver medal in 2:00.72, while Connor Wilson of SCAD placed third in 2:01.88.

ONU scored a 1-2 podium sweep in the last individual swimming event when Frank Tapia came to the wall in 1:47.87 ahead of teammate Andrew Fischer’s 1:50.59. Igor Dozortsev of Cumberlands (1:51.09) placed third. 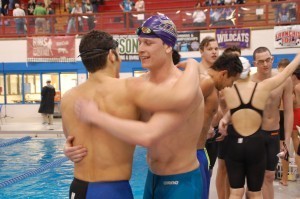 “It’s been great racing against you.” -Ramirez. Photo: Anne Lepesant

Clearly, the OBU-ONU battle in the men’s 100 free final gave us a sense of what was to come in the 400 free relay. First off, though, it was SCAD’s distance standout, Joel Ax, who set the pace for the field with his leadoff leg of 44.79. Both OBU and ONU had caught the Bees by the second exchange, and headed into the anchor leg, OBU had a .34 edge on ONU. Suddenly it was Ramirez vs Pheasant, for the umpteenth time over the last four years. The two seniors have faced off in individual events and relays, and are both intense competitors. Ramirez split 20.0-22.8; Pheasant went 20.3-22.8.