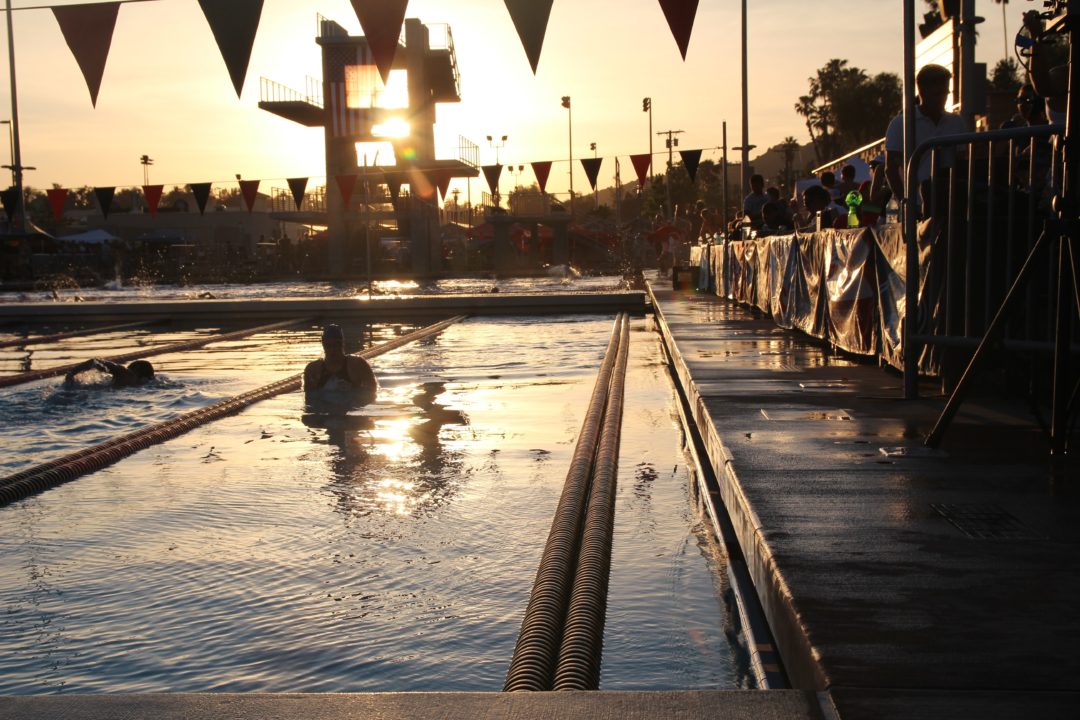 Now that Crean Lutheran has moved up to Division II, the field is wide open for a new champion in the girls’ meet. JW North, the 2014 boys’ meet champion, seems to have lost a good deal of its depth. Scoring out the psych sheet, it would seem that Polytechnic School and Rio Mesa have a lock on the respective girls’ and boys’ division titles. Both Poly and Rio Mesa get a big bump from their divers in a division that only fields between a half and three-quarters of the potential number of finalists in the diving event. And although they are unlikely to dominate the individual events the way Crean and North did last year, they both have enough depth to score big points in relays and with multiple “A” finalists.

With all the realignment that took place this season, Division III looks quite different from last year. Here are the psych sheet rankings:

North Torrance’s Margetts leads the qualifiers in the 100 back with 56.31, but she will be challenged by sophomore Deanne Umbay of Sierra Canyon (56.48), last year’s runner-up in the event.

The boys’ race could prove to be an exciting contest among Jerry Chen of Walnut (52.01), Calvin Giang of Gabrielino (52.46), and JP Mortenson from Windward (53.60); Mortenson is the highest-seeded returning “A” finalist from last year.

Sophomore Cailey Renken of Camarillo leads the qualifiers in the girls’ 100 breast; her seed time (1:02.07) is more than 5 seconds faster than what she went in finals last year. Beverly Hills junior Amy Okada (1:03.67) is second seed.

Moorpark junior Nicholas Masinsin has the top seed time (58.73), but JW North’s Javier Bernal (59.68) is the one to keep an eye on. Jacob Christensen of Valencia/Placentia is also in the mix (59.61).

Sierra Canyon’s Umbay (2:07.17) is the top seed by 1.5 seconds, while Heather Grotzinger of Pasadena Poly, the highest returning scorer from 2014, and Ksenia Afonicheva of West Torrance are seeded 1/100 apart at second and third.