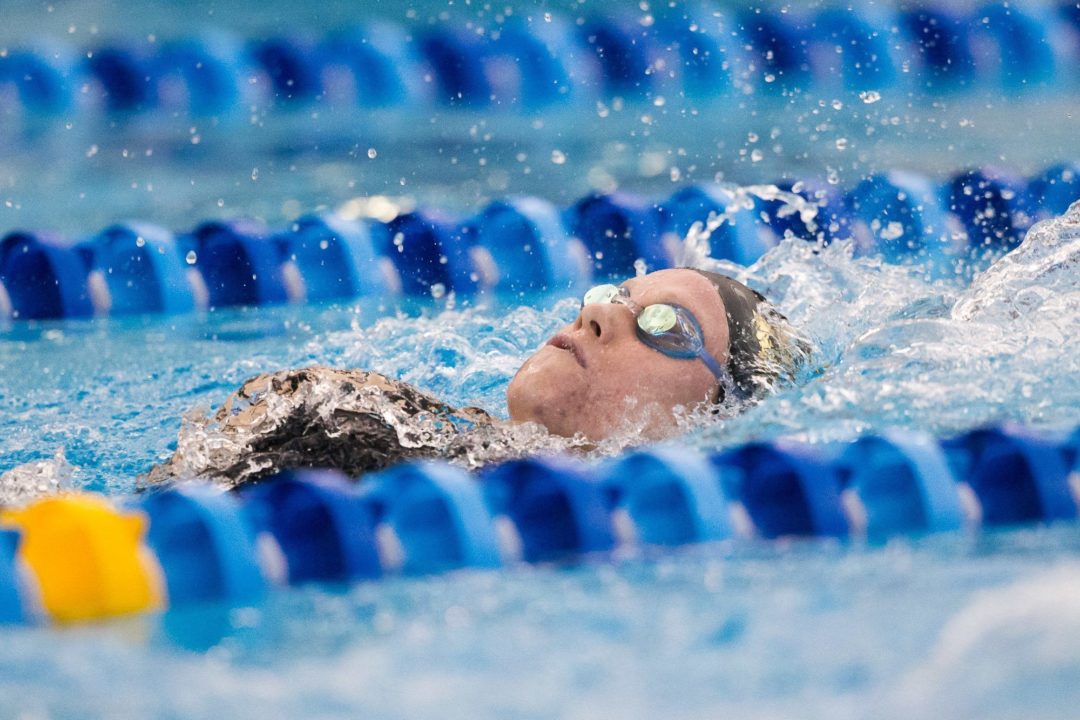 Ella Eastin of Crean Lutheran is in a new division this year and will be aiming to break two new records: 200 IM and 100 breast. Archive photo via Tim Binning/TheSwimPictures.com

No sooner has Crean Lutheran landed in their new, more competitive, division than they are swimming their way to the top. The loss of Lindsey Engel to graduation doesn’t seem to have impacted the Crean girls too much; their impressive depth reaches beyond the Eastin sisters and should be enough to keep them ahead of defending champion, Glendora.

Laguna Beach is another team that has moved up from Division III this year, and their boys look poised to edge defending champions, Los Osos, for the title. But it’s a very thin margin and it doesn’t take much –an extra “A” finalist here or there– to change the balance of power.

Here is what we get when we score out the psych sheet:

Crean Lutheran is expected to score big in the sprint freestyles, which of course is doubly helpful insofar as that translates to dominant relays as well. Freshman Elise Garcia leads the charge for Crean with the number one 50 free qualifying time (23.65) and the number two 100 free (51.28). Junior Tianna Jorgenson is fifth seed in the 50 (24.16). Martin Luther King’s Claire Fisch is the only other girl entered with a sub-24 50 free (23.78).

Arcadia sophomore Tenny Chong is not only the fastest entrant in the 50 free, but he is also the only sub-21 (20.76) and is .5 faster than the number two qualifiers, Eddie Gallehugh of Crescenta Valley (21.25) and Richie Campbell of Damien (21.25). The 100 free looks to be a much closer race, with Westlake senior David Puczkowski (46.39), Sonora sophomore Ben Blevins-Boor (46.40), and senior Michael Jones of Vista Murrieta (46.81) all bunched together;

With the 200 IM and 100 breast, Ella Eastin is swimming the same events she won last year, setting D3 records along the way. This year she has the D2 marks in her sights. Eastin is the top qualifier with 1:02.96. Senior Lauren Wood of Caparral is second with 1:03.94.

Defending champion, sophomore Alexis Margett of Glendora, is seeded half a second faster than her winning time last year (53.90). Teammate Catherine Sanchez is second at 54.56, while Emily Eastin of Crean Lutheran comes in with 54.90 for the third-fastest time.

San Marino senior Javier Lopez is entered with the fastest time by a full second (49.29), while Crescenta Valley’s Edward Yi (50.25), South Pasadena’s Garrett Tse (50.72), Zhi Chua of Mission Viejo (50.75) and Trenton Julian of Glendale (50.83) are all vying for position as well. Also within range of the title is last year’s runner-up, Adrian Gutierrez of Murrieta Valley (50.89).

I really see the Santiago and Arroyo Grande boys moving up past Laguna Beach. Being a coach in Laguna Beach’s league, I’ve noticed that their swimmers have dropped a lot of time over the season, but when it comes to bigger scale meets they’ve either added considerable amounts of time, or saved too much up in the prelims and missed the finals. Santiago and Arroyo Grande have always had good history of sneaking up through the rankings, and will definitely find themselves in the top spots fighting for the title