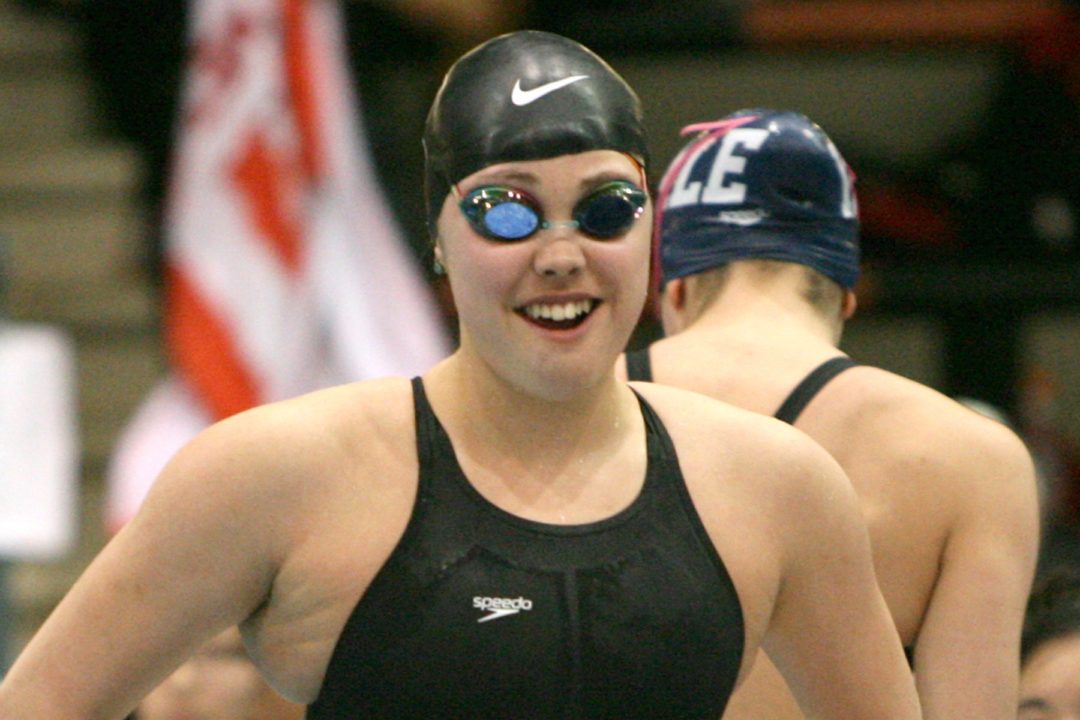 Senior Lisa Boyce of Princeton won the 50 free and contributed to Tiger victories in the 200 free relay and 400 medley relay on Day One of the Women's Ivy League Championships. Archive photo via Beverly Schaefer/ Princeton Athletics

Eva Fabian of Yale won the 500 free in an exciting all-out finish. Penn’s Shelby Fortin, the defending Ivy champion, maintained a comfortable body-length lead through the 300, when Fabian began descending. At the 450 Fortin turned at 4:16.44 and Fabian at 4:16.69. They were together at the 475 wall, both kicking all-out to the finish. In the end it was the final 27.31 from Fabian that was just too hard to match, and her 4:44.00 deprived Fortin of her fourth consecutive title by .14. Sherry Liu of Harvard was third. The top four swimmers all achieved NCAA “B” cuts.

Top-seed Alena Kluge of Columbia knocked another .13 off the pool record she had set in prelims with a first-place finish of 1:58.74. Princeton freshman Olivia Chan took second in 2:00.18, while Mikaila Gaffey of Columbia got third. All of them, plus fourth-place Sada Stewart of Princeton, made the NCAA “B” standard.

Ivy record-holder and defending champion Lisa Boyce of Princeton won the 50 free in 22.44. Harvard’s Victoria Chan and Yale’s Kina Zhou finished second and third, respectively, and all three came away with “B” cuts.

The 400 medley relay was a fitting finish to an exciting first session. Harvard (Danielle Lee, Stephanie Ferrell, Chan and Li) was leading the field by nearly two seconds after the breaststroke leg. Columbia was in second, .60 ahead of third-place Princeton. But Lisa Boyce ripped a 52-low butterfly and put the Tigers in the lead; Larson held on and Princeton ended up first by .36. The winning splits were Stewart (54.66), Chan (1:01.24), Boyce (52.37), and Larson (50.06). Princeton’s 3:38.33 broke the pool record by four seconds.