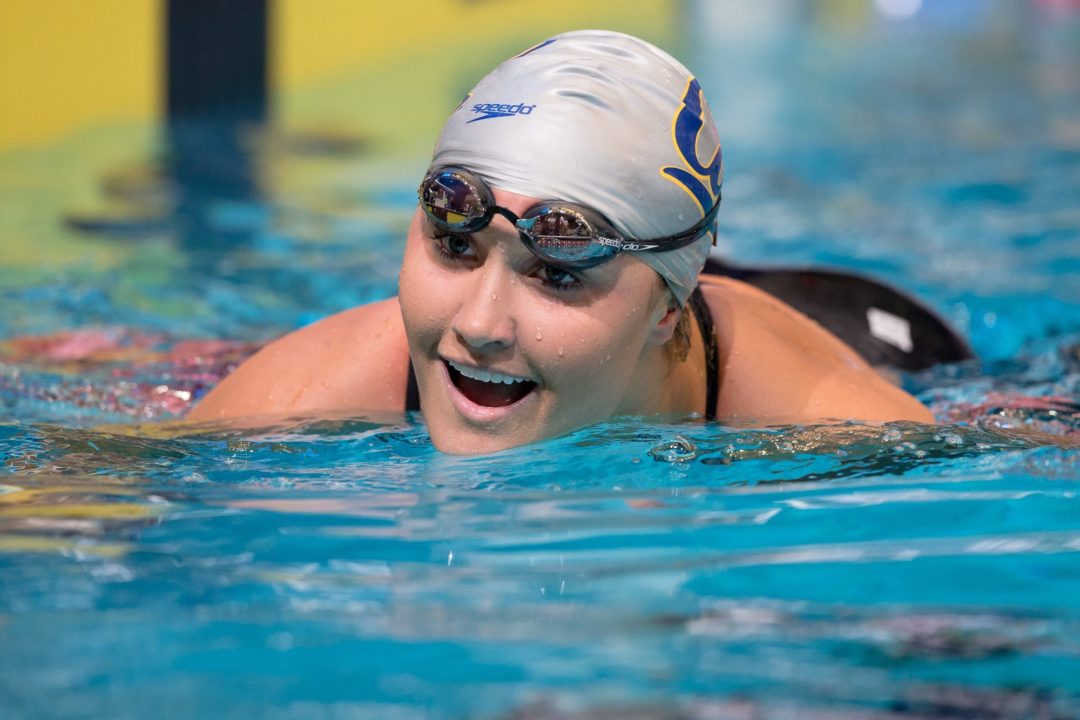 Elizabeth Beisel looks to end her final day at the NCAA Championships a winner, but a studly group of sophomores including defending champ Liz Pelton (above) may spoil her exit. Archive photo via Tim Binning/TheSwimPictures.com

What a race the 200 backstroke will be on Saturday night at the 2014 NCAA Women’s Championships.  No matter how you slice it, any swimmer in the middle four lanes has a chance to land a spot atop the podium. It always puts you in a good mood to see a senior go out with a win, and for this race that would be Elizabeth Beisel, but a handful of sophomores, Elizabeth Pelton, Courtney Bartholomew, Bonnie Brandon, Brooklyn Snodgrass, and Sinead Russell, may spoil that heartwarming finish.

Pelton stole the show last year on Day Three by breaking the four year old NCAA record and dominating the field in a blazing 1:47.84. This year’s field will do its best to not let history repeat itself.

The 200 back’s second superstar Elizabeth, Elizabeth Beisel that is, will give it everything she has in her last go around to claim an NCAA Championship. Beisel will be doubling that day, with the 200 fly at the end of the session, but will be fresh for this, her better event. She’s been doing some of her better swimming this last half of the year and looks to peak at just the right time in Minneapolis. Beisel is right on her seed time from last year and with a full day of rest on day one of the meet, she’ll be looking to crank home even more so on the backhalf, which is one of her specialities.

Then there’s Bartholomew, a breakout star who has been benefitting quite nicely from Auggie Busch’s new coaching style. Having only made the B final last year, Bartholomew looks to capitalize on training through ACCs and make a run for the top spot. With the team Virginia is bringing to the Twin Cities, Bartholomew will be doing everything she can to rack up as many points for her Cavaliers (who could make a surge for the top five in team standings).

In the hunt for the title as well will be Arizona’s Brandon. After a somewhat disappointing prelims swim in this event last year (settled for ninth in the B final with a time that would’ve placed her fifth), Brandon will certainly be swimming with vengeance. The Wildcat is already faster than she was last year which bodes very well for her come next week.

The other two sophomores that may be a little out of reach of the top spot (but it’s day three and anything can happen) are Indiana’s Snodgrass and Florida’s Russell. Both return to the championships with a year of experience already under their belts with times faster than last year. If they can repeat what they did last year in prelims, look for these two to jump a few spots in the top eight.

The lone freshmen in this year’s top eight is primarily known as a distance swimmer but finds herself seated highest in the backstroke. Despite being new to the NCAA stage, Rachel Zilinskas has the team of defending champs behind her, giving her the support and confidence she needs. The Bulldogs look thin in this event and will definitely need Zilinskas in that A final with the team standings being beyond close on the final day of competition.

Rounding out the final eight is Cal’s Melanie Klaren. She dropped a chunk of time last year to get herself an eleventh place finish. She’s already faster than her time from last year’s meet and with the backstroke group she trains with back at Berkeley, there’s no question she could squeeze herself into the top eight.

At the end of the day, the last session of any college meet is all about who wants it most. You need to put aside how much it’s going to hurt and think about the feeling you get when you look up at the scoreboard and realize you cracked the top eight and can call yourself an All-American.

Darkhorse: Kendyl Stewart hasn’t been able to match the breakout year she had last year in this event so far this season. With the hope that she trained through PAC 12s, like most of those conference’s swimmers do, Stewart could definitely make a run to be back in the top eight. Look for her to snag some points from teams who’ll need it most on the final day.

I don’t see anyone beating Pelton. Beisel will be lucky to get 2nd. I think she could still take Pelton in long course, though.

Agreed. Pelton in the 200 back is one of the biggest locks of the meet, IMO.

well, these are some pretty girls in the list! but wow are they fast. i think a huge question i have on this event is how many swimmer will crack 1:50? this will definitely be the fastest 200 back race ever swam in yards. i predict ~4 swimmers will go 1:49.99 or better. what does anyone else think?

Think Bartholomew could easily fight for 2nd, and get to the 1:48 range, pushing pelton to the low 1:47s or even dare I say 1:46. Courntey’s looking on fire this season, definitely give her another look!