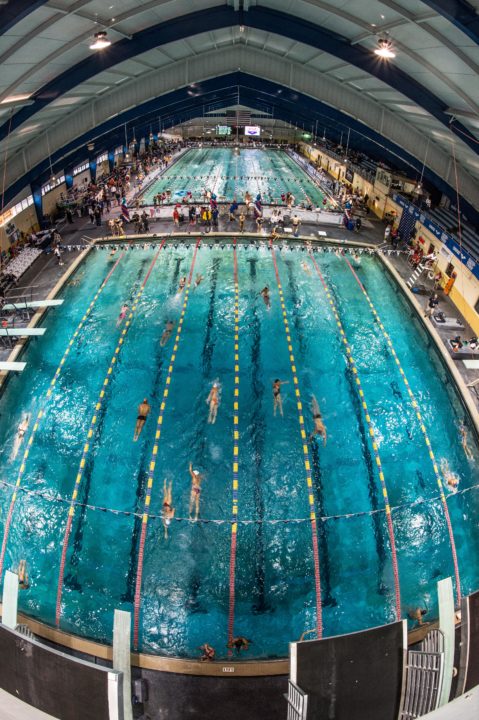 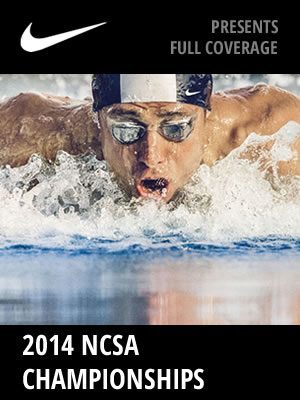 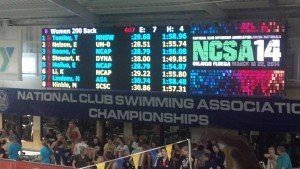 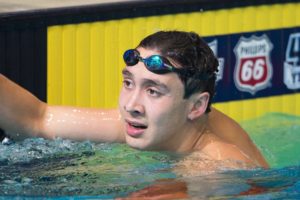 Simone Manuel took home the first title of the night in the girls 200 free, speeding to a career best time of 1:43.00.  The First Colony standout finished well ahead of Dynamo’s Kylie Stewart (2nd, 1:44.66) and Ozaukee’s Katherine Drabot (3rd 1:45.22).  Manuel’s time of 1:43.00 puts her in a three-way tie for 15th on the top-performance list, joining the likes of Sara Isakovic and Christine Magnuson.

Samantha Senczyszyn of Ozaukee would prove victorious in the girls 50 breast with a time of 28.08, doubling up on her title earned in the 100 breast yesterday.  Olivia Anderson from the Aquajets took second in 28.19 followed by New Trier’s Ingrid Wall in third at 28.50.

Conner Hoppe of Clovis snagged the 50 breast title in 24.57 after finishing second in the 100 breast last night. Carsten Vissering, last night’s 100 breast champion, was runner-up with a time of 24.76.  Michael Andrew earned a third place finish in 24.96.

A crowded field in the field in the girls 50 fly, packed with 400 swimmers, was dominated by Janet Hu of Nation’s Capital.  Hu touched first in 23.40, ahead of 15 year old runner-up Elizabeth Nelson (23.80). Mary Schneider of Academy rounded out third in 24.21.

Baylor’s Lucas Kaliszak managed to get to the wall just ahead of Michael Andrew in the boys 50 fly with a time of 21.30.  Andrew would touch second in 21.49, followed by Gunnar Bentz in third at 21.55.

The girls 400 freestyle relay would see a comeback performance by Nation’s Capital Swim Club to earn the NCSA title. At the final exchange, NCSC was trailing Aquaujets Swim Team 2:31.00 to 2:30.54, and was in fourth place.  A huge final split of 48.27 from Janet Hu was enough to catapult them into first place with a time of 3:19.27.  Aquajets snagged the runner-up position with a 3:20.06 followed by Ozaukee in third at 3:21.30.

Nation’s Capital also managed to win the boys 400 freestyle relay and their B relay took third.  The A relay crushed the field by almost three seconds, speeding to a time of 2:57.83.  Andrew Seliskar had a blistering leadoff time of 44.06.  Dynamo Swim club would take second in 3:00.54 with Nation’s Capital “B” not far behind in 3:00.93.

Andrew does not have the 200 breast record either

Michael Andrew does not have the 200 breast as well! But that could change shortly.

Doubtful but possible. Reece Whitley lowered the record to a 1:58.3 (if I’m not mistaken) so it’ll be a difficult task.

I think he broke it in prelims this morning….is there a recap?

1.58.39
Race here
http://www.youtube.com/watch?v=EoVpqINJYbI
It will not be easy for Mr Andrew.