2014 Men’s Ivy League Championships – Day One: Harvard Off to a Good Start 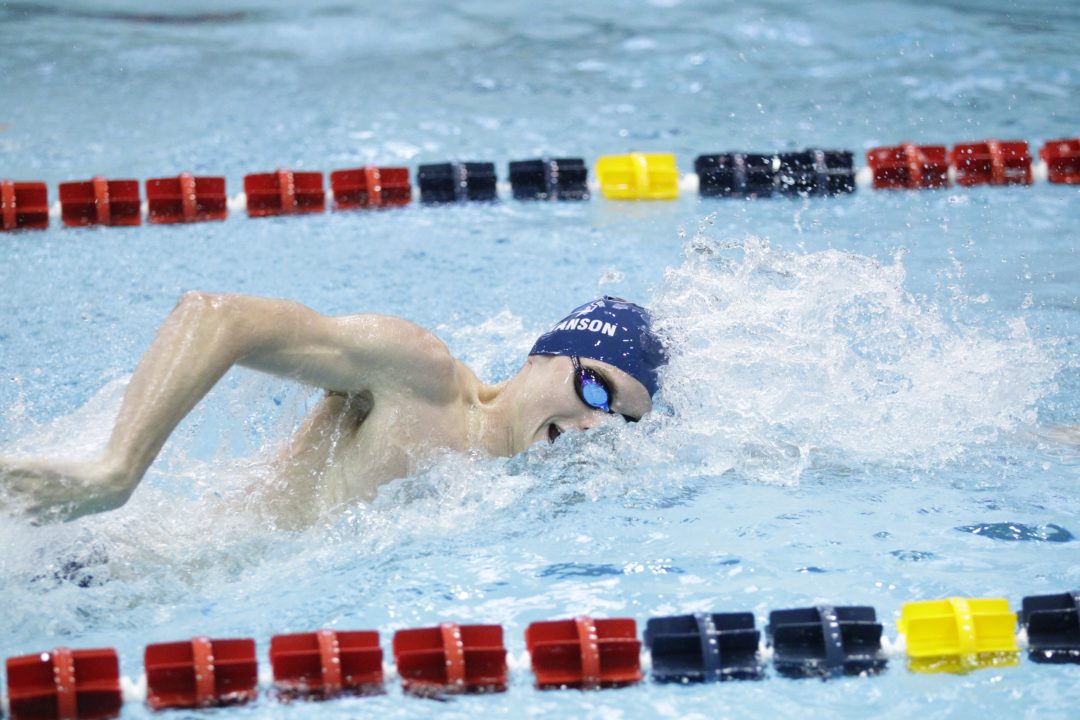 University of Pennsylvania sophomore Chris Swanson won the 500 free on the first night of the 2014 Men's Ivy League Championship at Blodgett Pool in Cambridge, Mass. Archive photo via Penn Athletics

Matt Fallon Details Training with Georgia Over the Summer

U.S. National Teamer Matt Fallon of Athens Bulldogs just became the 7th fastest American of all-time, winning the race as the only swimmer under 2:08.00

Adam Wu, a Canadian Junior Team member, has announced his commitment to swim and study at Columbia University, beginning in 2022.

Class of 2023 “Honorable Mention” sprinter Ethan Harrington will join the Princeton men’s team with Ivy League A final-ready times in the 50/100 free.

With all that momentum, a home crowd behind them, and three swimmers in the A final, you would have thought Harvard might sweep the 500 free podium. But Chris Swanson of Penn and Brian Hogan of Yale robbed the Crimson of that opportunity.

Top-seeded Aly Abdel Khalik of Harvard took it out fast; by the 200 he was 1.5 seconds ahead of his prelims time and about a second ahead of Swanson and Hogan. As Abdel Khalik began to fade Swanson and Hogan were descending. In the end, it was Swanson with the win in 4:18.31, Hogan just behind in 4:19.53, and Abdel Khalik in third with 4:21.88. Swanson crushed Penn’s school record of 4:21.82 which he had set in 2013.

Princeton’s Teo D’Alessandro dropped just 12/100 from his prelims time but that’s all that was needed to win the 200 IM and break the Blodgett Pool record. D’Alessandro and defending champion and Ivy record-holder Nejc Zupan of Dartmouth were locked in a stroke-for-stroke battle from the start. Both shot out of the gates with a 22-mid fly leg. By the back-to-breast turn D’Alessandro was ahead by .30. Zupan made up some time on the breast leg but that was about all he had in his tank. D’Alessandro pulled away and closed with a 25.8 to win with a Blodgett Pool record time of 1:45.45.

In the meantime, Princeton teammates Marco Bove (1:46.53) and Byron Sanborn (1:46.61), who had been in sixth and eighth place, respectively, at the 100, came up with incredible second-halves and made it to the wall before Zupac for second and third. Both Bove and Sanborn split 30.0 breasts and 25.7 frees to pass the rest of the field in the last 100. Sanborn out-touched Zupac by .01 for third.

Penn’s Eric Schultz surprised the Harvard trio of Schumacher, Satterthwaite, and Lee with a 19.70 to win the 50 free. Having already lowered his own Penn record in the morning with his 19.94 prelims swim, Schultz took another .24 off and got the win by .02 over Harvard’s Schumacher. Satterthwaite took third.

You couldn’t have ended the first night of Ivies on a more exciting note. The top four teams all finished under the pool record, and the top two, under the Ivy mark. Dartmouth’s James Verhagen was the first backstroker to the wall, in 47.29. Princeton’s Michael Strand touched at 47.41, and Harvard’s Jack Manchester at 48.25. Dartmouth maintained their first-place position after Zupan’s breast but Princeton’s Sanborn had narrowed their lead and Harvard was sneaking up after Eric Ronda’s 53.20. Then Harvard’s Jacob Luna split a 46.71 fly to overtake Dartmouth and catch up to Princeton’s D’Alessandro. Satterthwaite brought it home for the Crimson, beating Princeton’s Jeremy Wong 42.26 to 42.78 for the win.