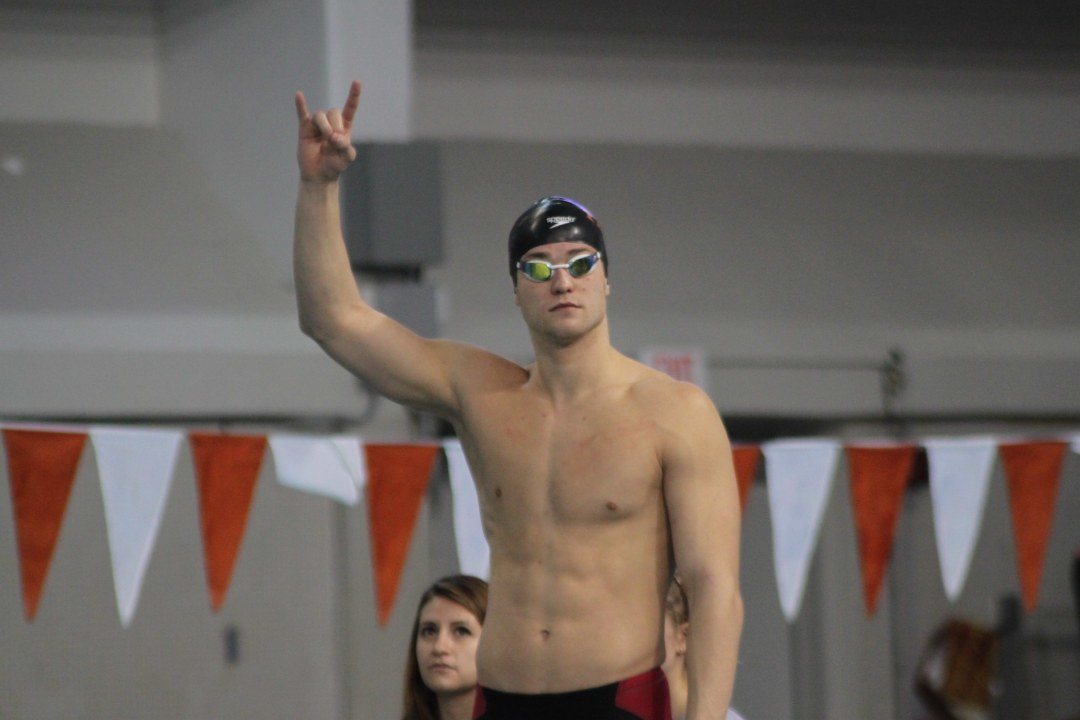 SwimAtlanta’s Ben Grottle has committed to join the Cincinnati Bearcat in the fall of 2022. Grottle is primarily a middle-distance swimmer.

Miss our women’s power rankings last week?  No problem, we have another set of men’s rankings for you just in time for Christmas.  We’re confident of who will finish in the top two.  Other than that?  Things could get interesting.  Remember that these polls are primarily focused on end-of-season expectations, and aren’t overly-reactive to dual meet results.

It took 26 points to crack the top 25 last year.  Andrew Kosic is good enough to do that by himself.  He’ll need some help if the Yellow Jackets want to climb much higher.

The H2Okies are on the edge of the top 16 in four relays, and between Morgan Lattimer and Colin Higgins, have good opportunities to score in a few individual events, as well.

Cadell Lyons (46.5 in the 100 fly) raised some eyebrows earlier this month.  Connor Knight has A-final potential in the 200 fly, as well.

After an off year as a junior, Drew teDuits looks like he’s caught a second win.  He’s already under the 1:40 mark in the 200 back.

Bence Kiraly continued his breakout year a couple weeks ago with a 4:17 and a 14:51 in the 500 and 1650 freestyles, respectively.  He’s currently in the top 10 nationally in both events. He makes for a nice complement for sprint star Nick Soedel.

Iowa jumps into the top 25 after an impressive mid-season performance highlighted by Grant Betulius crushing the team record in the 100 back, finishing in 45.56.  With top 16 swimmers in the 100 breast (Roman Trussov) and 100 fly (Jerzy Twarowski), it’s no surprise the Hawkeyes have a 400 medley relay currently in the top 8 nationally.

The Buckeyes don’t have a big name like Tim Phillips anymore, but they have substantial depth across the board, helping them put three relays in the top 8 and two more in the top 16.  Individually, Josh Fleagle has already been under 1:34.5 in the 200, and DJ Macdonald is a U.S. National Teamer (though he hasn’t swum a time yet in the breaststrokes this season that is likely to earn an individual invite to NCAA’s).

We haven’t seen Shane Ryan since the beginning of November.  Assuming he comes back without losing a step, Penn State won’t have a problem being in the top 20. Without him, Penn State probably falls outside the top 30.

Two relays in the top 8 and two more in the top 20, with three sub-20 and sub-43.6 sprinters.  That doesn’t include Handa Machado, who broke his own school record in the 100 back last month to crack the top 8 nationally.

We talked extensively about the distance group last week, but we should mention freshman Sam McHugh, as well.  The top prospect from the legendary Baylor School sits in the top 10 nationally in the 400 IM after swimming a personal best time at last month’s Nike Cup.  Big diving points from Mauricio Robles-Rodriguez will help in March, too.

Anze Tavcar and Blake Pieroni have been excellent, but they need some help.  At this point, the Hoosiers have at most two relays worth mentioning and only three swimmers with potential of scoring at NCAA’s. 45-50 diving points from Michael Hixon keeps them in the top 15.

Not much is new since we last covered the Crimson Tide a couple weeks ago.  Why the drop?  (1): Missouri and Louisville outperformed expectations.  (2): Alabama’s times didn’t hold up quite as well as we expected.  Kristian Gkolomeev and Anton McKee are the only two swimmers ranked in the top 16 in the country for the Crimson Tide.

Four top 6 relays, top 10 swimmers in the 100’s of each stroke, and additional scoring threats abound.  At this rate, the Cardinals would battle for a top 10 team spot in March.

Missouri blew the doors off their home invite last month, and their times still hold up even after the second wave of invites.  With their combination of sprint depth (Michael Chadwick, Matthew Margritier, Christian Aragona) and an elite breaststroker (Sam Tierney), the Tigers are dangerous in the four shorter relays.  There is a lot of potential to steal some points in the 200’s of strokes, as well.  Just like in our women’s power rankings, the Missouri Tigers are trending up more than any other team on this list.

NC State wasn’t quite as good as we expected them to be in Greensboro last week.  Then again, they usually save their best work for the ACC Championships.  Their sprint group alone (one of the five best in the country) is enough to keep them in the conversation for top 8.

Thin but good.  Joe Patching, Michael Duderstadt, and Kyle Darmody are in the running for the best sophomore trio in the nation, while freshman Jacob Molacek has been developing nicely.  Lack of depth is holding them back.

If Cristian Quintero returns to campus next month, as he’s planned to do, and the team still looks decent, we’ll be hard-pressed to keep the Trojans below Arizona for very long.  Santo Condorelli finally looks like we expected him to out of high school, giving USC three great 100 freestylers (Dylan Carter is the third), and Ralf Tribuntsov has been incredibly valuable.  However, with Sergio Lujan Rivera off the roster, there’s still no breaststroker to complete their medleys.

Our view on the Wildcats changes almost daily.  They still need at least one more sprinter, and we don’t know where Andrew Porter has been.  At the same time, they have three athletes (Kevin Cordes, Rafael Quintero, Bradley Tandy who should score a combined 120 individual points alone).  Of course, Arizona is known to typically lay it all on the line at their midseason invite to avoid fully tapering everyone for Pac 12’s.  If they rested as much as they’ve been known to, how much more room do they have to improve?

The Cardinal (and everyone else below them) are still a good distance from cracking the top five, but things are looking up.  Thomas Stephens, Connor Black, and Sam Perry have been solid in what originally looked like a piecemeal sprint group.  Even largely only looking so-so at their invite, the Cardinal are top 10 in four relay.  Gray Umbach and Max Williamson have been impressive, but we were hoping to see more from freshmen Curtis Ogren and Andrew Liang right before Thanksgiving.

Just one relay in the top 10 and five swimmers currently in the top 16 in an individual event.  Michigan always impresses at the Big Ten Championship in February, but looking at their results from AT&T Nationals… well… maybe they aren’t as complete of a team this season as we thought?  That doesn’t mean they will fall out of the top five, though; a team anchored by Anders Nielsen, Dylan Bosch, Richard Funk, and Bruno Ortiz is too good for that to happen.

Florida, the highest-ranked team to compete in the Georgia Tech Invitational, remains securely in the fourth spot.  The Gators weren’t all that impressive (hard to be this early in the year given the workload under Gregg Troy all fall), but the usual suspects proved they still had it (Caeleb Dressel, Dan Wallace, Mitch D’Arrigo, etc).

Quick!  Everyone should run outside right now to make sure the sky isn’t falling… The Georgia men have sprint freestylers!  For the first time in almost 20 years, the Bulldogs are legitimate threats to bring home a team trophy, largely because they finally have a very good #1 sprinter (Michael Trice) and supporting depth from an assorted cast of characters that includes a mid-distance specialist (Matias Koski), a backstroker (Taylor Dale), and two breaststrokers/IMers (Nic Fink and Gunnar Bentz).

Having arguably the best IM group in NCAA history helps, too: Georgia has five guys with lifetime bests under 1:43.5 (including Chase Kalisz and Fink under 1:42.5) and four under 3:43.0 (including three at 3:41.5 or better).

Not a ton of ground-breaking news to report from Cal’s performance at the Georgia Invite.  One thing we did notice: how valuable Tony Cox was for them last year.  Justin Lynch has jumped right in as the #1 flyer, but a sprint freestyle-depth void remains.  Fabio Gimondi and Henry Chung will have to take over.

Holy moly, Texas is good.  We knew that before midseason invite season (they have held the top spot in both previous sets of power rankings).  But…

There’s a lot of swimming to be done, but for now, the Longhorns are our undisputed #1.

You’re forgetting a couple of bullets to help build the longhorns case: — Brett Alexander Ringgold split an 18.1 on their 200 freestyle relay (Wait, that wasn’t Brett! That was batman!) — John Murray has arguably the greatest post race celebration in NCAA history by the slamming of the blocks and immediately throwing up the hook em sign. — Skrowndawg gets extra leg work daily by running to all of his classes to help him with his kicking, which he is by far the best kicker on the team. — William is best recruiter in the nation for 805 Dewey. — Jake Ritter is just the freaking man. — JButt snores louder than any olympian to ever live. — Ronny… Read more »

Chris Perry the Lester – While I know that most of your comment is tongue-in-cheek, just for the sake of clarifying for anyone who might read it, the 18.1 split was a touchpad error.

I can confirm that these are all true.

Texas will sure be tough to beat in March. It’s really tough to gauge Cal right now: other than Lynch, their freshman class hasn’t done too much; their sprint freestylers looked a bit off at Georgia, but I’ll guess they didn’t rest much more than a few days; Murphy and their 400 MR looked really solid, but you might expect that no matter what. In my mind, Georgia is the huge surprise here. I’d be surprised if they stay top 3, but it seems like they’re in a position to score a good amount of points. What’s going on with AZ, though? I’ve got to think they’ve strayed from their decade-old ‘qualify mid-season’ strategy and opted for a mode similar… Read more »