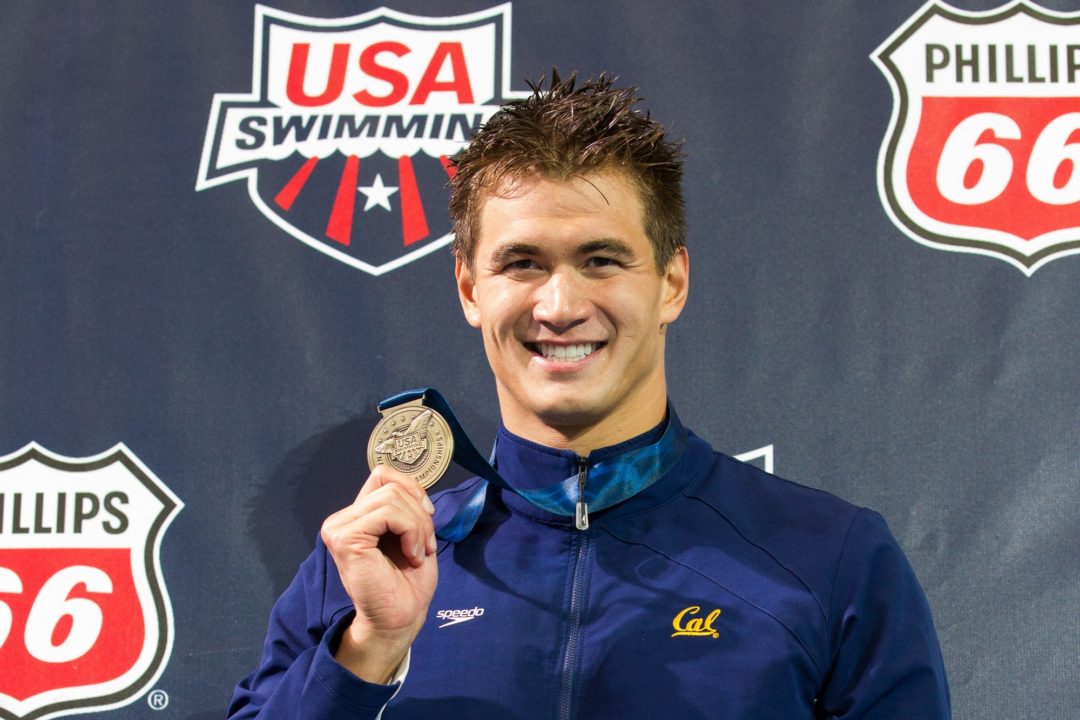 Can Nathan Adrian go from not qualifying in 2012 to gold in 2013? (Photo: Tim Binning/TheSwimPictures.com)

Pieter Coetze got it done for gold in Pretoria…..6 times over at the South African Regional Short Course Championships.

South Africa’s Tatjana Schoenmaker established a new national and continental record in the women’s SCM 200 breast while competing in Pretoria.

Nowhere else is the term “it’s anyone’s race” more appropriate than the 50m freestyle. Swum on the second last day of the meet, this year’s line-up showcases a lot of familiar faces with some new expectations, with hundredths of a second separating swimmers.

Will Cielo return to world record form? No longer the dark horse, will Manandou pull a repeat of London? Can Magnussen shake off the extra-curricular drama and atone for his performance at the Olympics? And can Nathan Adrian take the 50m crown back for the US?

Nathan Adrian is coming off a successful US Nationals, swimming a world-leading 21.47. Adrian’s time was just one-hundredth of a second off of his lifetime best of 21.46 swim at the 2009 World Championships. He didn’t make the London Games team after placing a disappointing third at trials (21.68) where he was the favorite heading in. Adrian has been swimming well in-season, and with his combined hunger to make up for not qualifying for London in this event, and his world best in ‘13, he is the slim favorite heading to Barcelona.

World record holder Cesar Cielo (BRA) and Olympic bronze medalist has been swimming well this year, posting a 21.57 in April, which is all the more impressive given that he had reconstructive surgery on his left knee just 8 months ago. Cielo is also the two-time defending world champion in this event, and would become the first to three-peat the event if he wins again in Barcelona. His preparation and focus have been exclusively on this event, leaving the 100m free and 50m fly off the itinerary this year.

Florent Manaudou (FRA) was the upset winner in London, having gone into the Olympics with the 10th fastest time in the event that year. The first Frenchman to win the event at the Olympics, Manadou swam a 21.34 out of lane 7, out-touching Cullen Jones and Cielo. The time is the fastest recorded in a textile suit, and just a shade off Cesar Cielo’s Olympic record of 21.30. Manaudou’s season best this year is a 21.55, which is half a second faster than the time he went into London with. While he won’t get the same type of drop again this year, even a marginal improvement would get him into the low 21’s.

James Magnussen (AUS) has been battling a fair amount of out-of-pool issues this year, from possible additional sanctions from the Australian Olympic Committee stemming from his taking of Stilnox (a prescription sleeping drug), to allegations from a couple Australian female teammates of inappropriate behaviour at the Aussie pre-Olympic camp. Despite this, he has been swimming well recently. He easily won the Australian trials for this event, clocking a 21.52, making him the second fastest man this year. That sort of speed is a relatively new, but very welcome, thing for him, and is what really helped him turn the corner in the longer 100 free. Judging by how well he has been swimming the 100 in recent months, it would seem “The Missile” (this nickname seems to be getting a lot of use these days in swimming circles) is ready to put the out-of-pool antics behind him and let his swimming do the talking.

Adrian’s Cal teammate Anthony Ervin hasn’t been to a World Champs since they were held in Barcelona in 2003. 2013 will be an opportunity for Ervin to “do things anew” as at Trials he admitted that ten years ago he wasn’t ready to be there but he was anyways. His time of 21.70 is the 5th fastest in the world this year, and just a shade off of his best time of 21.60 he swam at Olympic Trials in ‘12.

Manaudou’s French teammate and brother-in-law Frédérick Bousquet was the first swimmer to ever break the 21 second mark, cranking out a 20.94 at the French National Championships in April 2009. Another fixture in the Auburn sprint factory, Bousquet trades time between Brett Hawke’s program and Marseilles. In April at the French National Championships he placed second in 21.73.

Vladimir Morozov (RUS) had a stellar season swimming for USC, winning NCAA titles in the 50 and 100 yard freestyle. At the Russian National Championships in April he won the 100m (47.93 – world’s 2nd fastest this year), and also swam the 6th fastest 50 of the year in 21.72.

The ageless Roland Schoeman (RSA) is back yet again, tied for the 9th fastest time in the world (21.88) this year with three Americans (Josh Schneider, Jimmy Feigen and Cullen Jones). He still has the short course world record in this event (20.30), and has World titles to his credit (Montreal 2005; 50m free and 50m fly). Another – albeit random – tidbit about Schoeman: he turned down a US$5.9 million contract to compete under the flag of Qatar in 2005. No, I did not just make that up. His lifetime best of 21.67, swum in Beijing puts him outside of medal contention, but expect the veteran to be in the final.

Last week 24 year-old Adam Brown (GBR) beat Mark Foster’s super-suit British record, swimming a 21.96 at the British World Championship Trials. Brown, who also trains out of Auburn University, has gotten back down under 22 seconds for the first time since the super-suit era, and with that time places him 10th among the swimmers eligible to go to Barcelona.

Marcelo Chierighini (BRA) is the other Brazilian entry in this event, and yet another Auburn product. This will be his first individual race at a major international meet for the 22 year old, so it will interesting to see if he can lower his 2013 time of 21.88 to challenge for a medal.

Five of the 11 fastest swims this year were posted in the final at US World Trials. Sub-21.9 swimmers Josh Schneider, Jimmy Feigen and Cullen Jones fall victim to the 2-per country rule. Most notable of this bunch is Cullen Jones, silver medalist in this event in London.

Similarly, Brazil’s Bruno Fratus (21.92 this year), who finaled last year in London, placed third among Brazilians in 2013, relegating him to spectator status for the event.

I’m going for redemption for the Missile: Magnussen, Manaudou, Adrian.

I stick with the Olympic champ Manaudou, followed by Adrian and then Magnussen. Winning time: 21.3 something with Adrian just lowering his PB with a 21.4 low and Magnussen with a 21.4 high.

I am with you.I will stick with Manaudou win, with a new textile best in low 21´s.

Ye Manadou all the way, also I think Ben Proud may be a dark horse