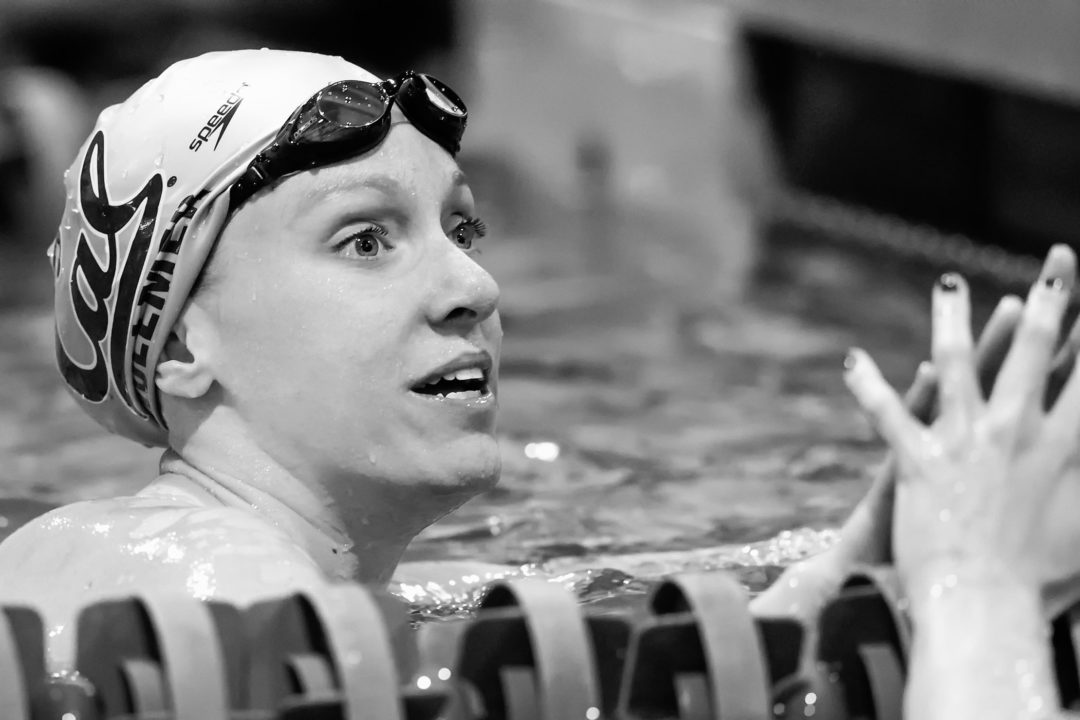 History is not on the side of the World Record holder and her ability to win the World Championship in the women's 100 fly (Photo: Tim Binning/TheSwimPictures.com)

Well then, this race got a little more interesting in the last year, didn’t it?

Dana Vollmer in 2012 broke the World Record and won the Olympic title by nine-tenths of a second: a huge margin for that race, and bigger than the margin had been since Inge de Bruijn’s domination of the race in Sydney.

But here’s the stat of the year: no woman in history has won Olympic gold and subsequently won a World Championship in that event, for the rest of her career, in the 100 fly. Nobody has ever repeated as a women’s 100 fly champion. De Bruijn didn’t even swim the 100 fly in Fukuoka in 2001, despite dominating the Olympic race the year before by more than a second. Only two women have managed to even medal in the event in two Olympic Games, and only one of those (de Bruijn) has a gold as one of those medals. Winning an Olympic gold in the women’s 100 fly is almost a death-blow to one’s 100 fly career.

So, will the ‘Olympic curse’ get Vollmer as well? She wasn’t as good at the World Championship Trials as she was a year before in Omaha, and she’s given up her big advantage: in Indy, her fellow American participant in this race Claire Donahue turned before Vollmer. Vollmer made her money in 2012 going all-out on the first 50 and being able to hold on coming home. Donahue also happens to swim very hard on her first 50, though.

Both Donahue (health reasons) and Vollmer (choosing to train only singles) haven’t had the same training as they’ve had in the past, though, so the rest of the world has a very good chance to earn a lot of medals.

Enter Australia’s Alicia Coutts. She was a stabilizing force in London with 5 Olympic medals, and hasn’t let up one bit this year. She leads the world with a 57.18, and has swum well enough in her other races as well that makes her appear to be a good bet to wind up on the podium in Barcelona.

Another swimmer who has also been out-of-her-mind is Canadian Katerine Savard. She didn’t have a very good Olympics in 2012, but has bookended it with two fantastic years (2011 and 2013) that show where her potential is. She unfortunately didn’t make the team in the 50 fly, where she has since broken the Canadian Record, but that gives her a chance to be focused on this 100 and the 200 afterward.

Savard is swimming well in Kazan at the World University Games this week, and she was good in late June in Montreal, and she was good in early June in Mission Viejo. 10 years ago, this run of success she’s had would be scary. In the modern day, it’s fairly encouraging. Expect a 57-low at least in Barcelona.

There’s two strong Scandinavians in this race: Sarah Sjostrom from Sweden and Jeanette Ottesen from Denmark. They’ve both been matching 57.63’s this year. Sjostrom is the old World Record holder in the event and came up just a bit short at the Olympics, finishing in 4th place.

Ottesen has spent a lot of time this year remaking her freestyle and going through some growing pains, but her butterfly continues to look very good, including a 57.7 in Canet in mid-June.

China’s Lu Ying was the silver medalist at last year’s Olympic Games behind Vollmer, and though there’s not a ton of information coming out of China in-year, she was a solid 57.9 at China’s National Championship meet. That’s enough to be confident that she can get into the final, but not enough to know that she can medal.

Italy’s Ilaria Bianchi is a swimmer I really like. Unlike many of the Italian women, she had no post-Olympic swoon, and has developed a bit of a reputation as a big-meet swimmer. With times to medal in Barcelona likely to be a bit slower than it was in London, Bianchi is very much in the hunt.

If you’re looking for a good dark horse pick, look no further than Greece’s Kristel Vourna. She was 12th at the Olympics last year, and this year trained under new Alabama coach Dennis Pursley. Her 100 times haven’t been her best, but there was a glimmer of hope at the Santa Clara Grand Prix at the end of May: a 26.62 in the 50 fly that almost broke her own National Record. Last year, she had a May meet to rest for (the European Championships) whereas this year she didn’t. Generally, though, she’s a big taper swimmer, so don’t count her out of a high finish.

Vollmer is too good to fall much further than silver, though, and among the big medal contenders she should still be the fastest starter. Bronze is a real toss-up, but I’m going to take a little bit of an upset and pick the Italian Record holder Bianchi to sneak in and make her big statement.

If anyone will defeat Dana it is going to be Alicia. Dana has been around quite a while so I do not doubt her ability to get through the three rounds saving a little bit more for the final. Just make top 8 safely and I wouldn’t be surprised to see her hand on the wall first.

If anyone will defeat Sarah Sjostrom it is going to be…Sarah Sjostrom. I hope she will not repeat the same mistake of last year. She defeated herself in London but will not happen again. Ok, maybe Rafael Teixeira and DDias will say that Brazil has a 12-13 year old who already swims 55 low, but untill then I believe Sjostrom is the clear favourite.

Never said that.. and you seem to have something against brazil… at every post you bring something never said to show some unknown point,..

Dude,
you have some issues…
Female swimming in Brazil is almost inexistent… the only young girl noteworthy is Fernanda Delgado(fourteen),25.9 in 50free LCM.
And i like to compare notes.Brazilian Swimming Federation dont make an official ranking(like USA swimming does).We only know how good someone is comparing with each other.By the way, i dont compare sub-13 times.I think is child abuse.

Dana vollmer was so far ahead of everyone last year, that she would still win this year, despite lighter training.

Braden, in the Olympic final in London Dana was “only” third at the 50 behind both Ottesen and Donahue.