2013 North Coast Section Championship Finals: A Meet for the Ages 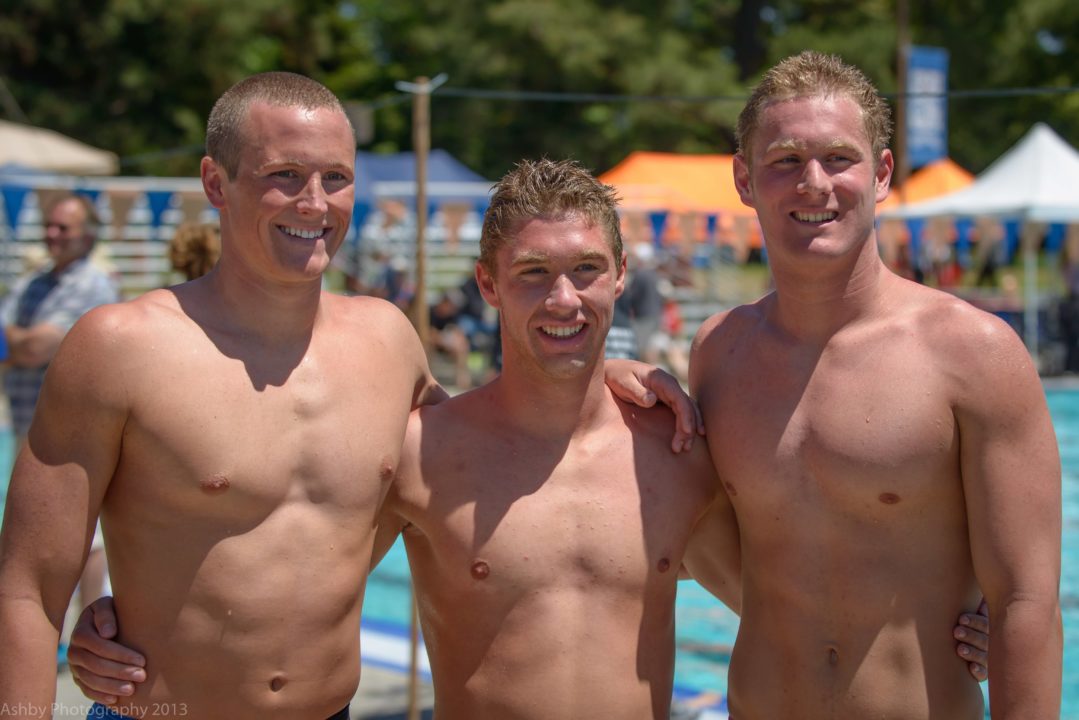 Many thanks to Dean Ottati for his coverage of the North Coast Section Championships this weekend, including this report.

The 2013 high school swim season was one for the ages, and the men and women of the North Coast Section put one final bold exclamation point on it right at the end. The hype coming into this meet was that this was perhaps the greatest senior class of swimmers in NCS history, and that they had a chance to stand up even with the great accomplishments of the Bolles men and the performances of the DC Metros.

Sometimes a race exceeds even the considerable pre-meet hyperbole. Today’s 100 yard breaststroke at the NCS championships has to be put on the very short list of greatest high school races of all time. Steven Stumph (Sr. Campolindo, USC) , Charlie Wiser (Sr. Miramonte, Stanford – Water Polo and Swimming), and Nick Silverthorn (Jr. Granada) all broke the existing national record. At no point was it clear who would win. First it looked like Stumph, then maybe Silverthorn catching him off the wall at the 50, or Wiser making a charge coming into the 75. In the end, Stumph prevailed in a crazy-fast 53.39. Wiser was next in a 53.57, and Silverthorn in perhaps the most epic third place finish in all of high school swimming anytime, anywhere, finished in 53.61. All of them under the old overall high school record of 53.66. Imagine being third place in a California section, third place in the state, third place in the country, and so far, third place in all of high school history. Ultimately, Silverthorn may get the last laugh, as he still has one more year to come back in his high school career and claim this record as all his own, while Stumph and Wiser carry their epic rivalry into college.

After watching three guys all break the national record in what very well might have been the very last individual high school race of the 2013 season, the women of Carondolet were not to be outdone. They too had a statement they wanted to make. Chelsea Chenault (Sr. USC), led off the 400 Free Relay in a 49.27, breaking the NCS 100 free record held by Olympian Kim Vandenburg. Natalie Amberg was next with a 51.19 split, Madelyn Murphy followed with a 49.82, and Madison White brought it home in a 50.14. When it was over, Carondolet had won the race, had won the meet, and they had broken the national record, posting a 3:20.42, eclipsing the old record of 3:21.20 set by J Serra last week.

Chenault and White were part of a national record in the 200 Medley Relay early in their high school careers, and they finish with a second one in the 400 Free Relay.

Jackson Miller started his day with a win, outdueling Nick Silverthorn in the 200 Free, and establishing a new NCS record in 1:35.86. But Miller had more work ahead of him. In the 500 Free, Miller charged into the lead on the first 50 and never looked back, finishing in new NCS record 4:23.85, erasing the oldest NCS record on the men’s side of the books by more than two seconds (4:25.98). Freshman Maxime Rooney finished second in 4:28.86, but he has a few years to chase this one. With two new NCS records in hand, Miller was still not done. As part of the winning Las Lomas 200 Free Relay, Miller anchored in a lifetime best of 20.09. And just to finish with one last moment of glory, Miller tied the NCS record in the 100 Free with a 44.22 split leading off the Las Lomas 400 Free Relay. Miller ends his great career with NCS records in the 100 (tie), 200, and 500 freestyles.

In the men’s 100 Fly, Steven Stumph broke the NCS record he set in the prelims, going 47.88, holding off both the super freshman Maxime Rooney (48.32), and the outside smoke of Michigan bound senior Jason Chen (48.45). Later, Chen, once again swimming in lane one, used his outside position to get past the field in the 100 back (47.99), finishing just ahead of Sven Campbell (48.23). However, Campbell retains the NCS record with the 47.65 he set in prelims.

In the final race of the meet, the men of Campolindo, Grant Sivisend, Steven Stumph, JD Ratchford, and Sven Campbell came from behind to finish in a 3:01.70 just out touching the men of Granada by .03 (3:01.73). Although he was probably a little disappointed by some of his individual swims today, Campbell finishes his high school swimming career by coming from pretty for behind to pull out the win for Campo, anchoring in a 43.87. He also won the 50 free earlier in the day in 20.45, leading four swimmers better than 21 seconds. Campbell will retire with all or part of 5 NCS records: The 200 Medley Relay, 50 Free, 100 Free, 100 Back, and 400 Free Relay.

All of the men on the second place Granada 400 Free Relay are returning next year.

In total 11 NCS records, half of the total 22 events, were either established or tied during the prelims and finals this year.

On the women’s side, seven of the eight finalists in the 100 back finished with Automatic All American times.

And in most races the Automatic All Americans ran three and four deep.

Celina Li ended her high school career with a win in the 200 IM. (Photo: Fred Stumph)

Charlie Wiser not only finished second in perhaps the greatest high school race of all time, he also adds to his list of NCS championships by breaking 1:50 in the 200 IM for the first time, posting a 1:49.62.

Sophomore Iris Brand of Amador Valley was a two time champion today, breaking two significant barriers by going 22.96 in the 50, and 49.85 in the 100.

Sophmore Ariana Saghafi of Albany challenged herself against the very best today. After finishing second to Chelsea Chenault in the 200 free, she found herself in a battle with Celina Li in the 100 fly, with Saghafi pulling out the win at the end in 53.46.

Carondolet’s UCLA bound Madison White finishes out her career with a nice 53.91 in the 100 back, just ahead of Monte Vista’s USC-bound Sidney Cooke (54.76). Given the cross town rivalry of their destination colleges, these two will probably race many times again.

San Ramon Valley Junior Heidi Poppe found herself in a battle of her own today in the 100 breast, out touching Cal bound senior Taylor Young of Cardinal Newman. Poppe finished in 1:01.18, while Young finished .04 behind in 1:01.23. Just behind those two was sophomore Riley Scott who finished in 1:01.94.

The Small School Shout Out

Today’s small school shout out goes to the men of College Prep. College Prep is known mostly for it’s academics, and not so much for it’s athletics. This is a school that measures it’s success by percentage of the senior class that is admitted to the Ivies, Stanford, and MIT (close to 33%). But now, it can be known for it’s swimming athleticism too.

Campolindo wins the men’s title for the ninth straight year. But next year number 10 will be tough. Campo loses a lot of great champions, and runner-up Granada returns just about everybody.

There is a long-standing tradition in the NCS. After each final is complete, the officials black out the scoreboard while the results are finalized. Then, when the results are official, the scoreboard is re-lit, and each individual swimmer is introduced starting with 8th place, counting down to first. As they emerge from the water, each swimmer is presented with both a flower and their medal, while the announcer tells the crowd a little bit about them. It is a way to both slow down the meet, and to celebrate the amazing kids with whom our sport is blessed.

Prior to the meet, all finalists are asked to fill out an information card, including some “fun facts” about themselves. Many of these never receive airtime, but they are often quite funny: “Miles Jackson was bitten by a radioactive spider,” or “Jean Kelsey aspires to be a professional mermaid.” But what the audience does hear about is the future. If a swimmer is a senior, it’s announced where the athlete will attend college. Or if a swimmer in an underclassman, sometimes the audience is treated to an aspirational appeal to the many college scouts in the audience: “John Jones really loves Stanford and wants to swim for them someday.”

Throughout the course of the day, the announcements pile on top of each other and the names of the colleges mount: Cal… Stanford… USC… UCLA… Harvard… Princeton… Brown… Michigan… UCSB… MIT… Amherst…and on and on they go until finally one is completely overcome by the sheer dedication, the determination, and the excellence of these kids. They are the best and the brightest, and they both inspire us and give us hope for the future. What an amazing year. We wish our graduating seniors well.

Great re-cap.. and shout out to Carondolet and to all the swimmers from a proud SRV parent.. CONGRATS AND GREAT SWIMMING! Can’t wait to see you all in college as competitors and friends for life.

Huge men’s 100 breast with 3 guys under 54! And remember that Andrew Seliskar, only 16, has swum 53.26 two months ago! What a season for men’s breaststroke in SCY! Good wins for Chelsea Chenault without crazy times. She probably saves her taper for the world trials and it’s a good idea because she has a good chance to qualify in the 4X200 free relay. Another girl to watch is Ariana Saghafi. She’s just a sophomore and her weekend has been successful with very impressive time drops. In the 200 free, 1.54.11 as seed time, 1.49.70 in prelims and 1.47.79 in final with a second place behind Miss Chenault! And in the 100 fly, 57.54 as seed time, 54.17 in… Read more »

Saghafi is a very young sophomore, too, born in 1998 (when most are born ’96-’97) so definitely impressive for her age. Her and Chenault train together, I believe.

Just after watching the three freakish breaststroke swimmers do the unthinkable, Sven Campbell closes a 2 second gap on Granada’s anchor to win by .03.