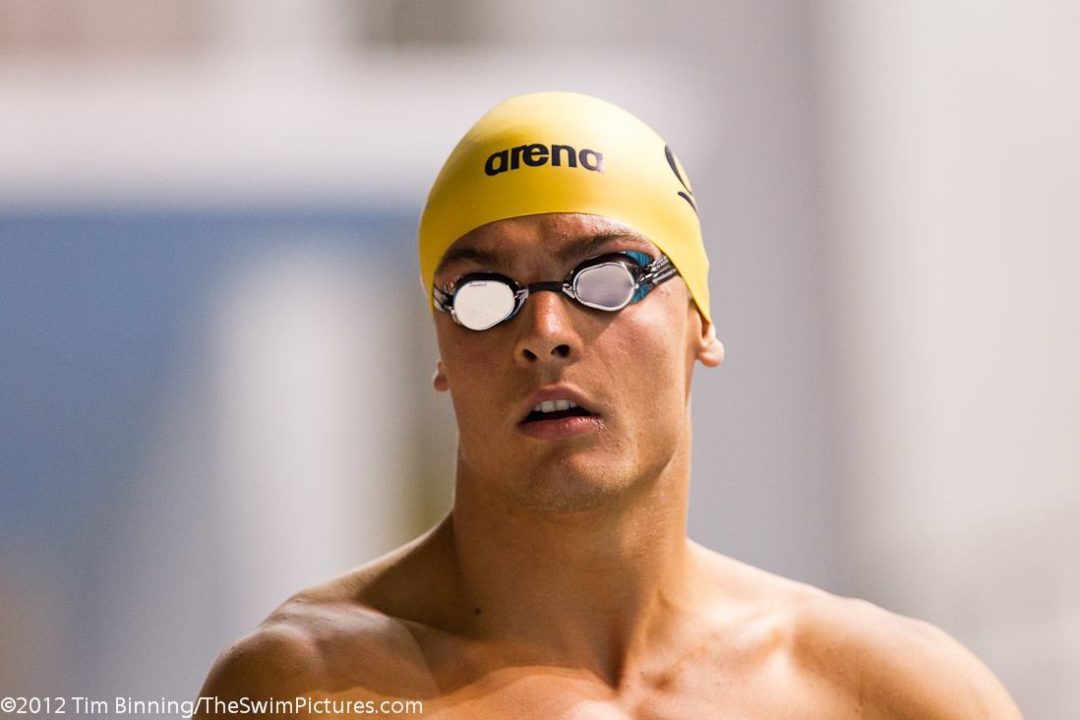 Cal's Marcin Tarczynski comes into this weekend as the defending NCAA Champion in the 200 IM. (Photo: Tim Binning/TheSwimPictures.com)

Indiana’s Cody Miller is a great breaststroker; one of the best in the country.

But once the junior finishes his collegiate career and begins to transition to professional swimming, his future internationally may actually be in the 200 IM. He’s playing multiple roles for the Hoosiers this weekend; sometimes as a butterflier, sometimes as a breaststroker, and sometimes as a freestyler.

The only role, though, where he enters the meet as the top seed is in the 200 IM, where his 1:41.85 from BIg Tens knocked off swimmers like Kyle Whitaker and Dylan Bosch from Michigan.

Based on last year’s results, in this event early in the meet, Miller was able to drop almost a second between Big Tens and NCAA’s. Granted, that was from a 1:44.8 to a 1:44.0; coming in so much faster this year, the game may change. Needless to say, Miller has all of the speed and versatility needed to contend for this title.

He’ll need that versatility, as six of the top eight finishers from last year’s meet all returned (in addition to six of the eight swimmers in the B-Final).

The returners include the top three: Marcin Tarczynski from Cal, Marcin Cieslak from Florida, and David Nolan from Stanford. With so many returning, Miller swimming well, and the addition to the field of big-time newcomers like the aforementioned Bosch (3rd seed), Georgia’s Chase Kalisz (5th seed), and Pavel Sankovich (7th seed), somebody is going to be disappointed.

Cal’s Tarczynski is an all-around beast-of-a-swimmer, and alst year at NCAA’s didn’t give up much ground to anybody on any leg except for the closing freestyle. There, Florida’s Marcin Cieslak tried to run him down, but ran out of room three-tenths short. Tarczynski has had a year to work on that closing speed, and though Miller’s time this year is better than Tarczynski’s winning time from last year, I think the Cal swimmer enters this meet as the favorite.

Nolan from Stanford will also be a big challenger. Out of all of the swimmers in this field, he has the best time in his career, which is a 1:41.39 from high school. Mark it down: if Nolan goes a best time at NCAA’s, he will win this race.

There’s a pair of other guys who weren’t in the A-Final last year, but are swimming excellently this season. Texas’ Austin Surhoff was the NCAA Champion in this race as a freshman in 2010, though it wasn’t against as good of a field as this one. He slipped back to 11th last year. He always drops time at NCAA’s, as does most of the Texas team, but this year he’s way ahead of where he was prior to last year’s national championship meet. Gotta have him in the A-Final.

Georgia’s Nic Fink, meanwhile, is really blossoming into one of the Bulldogs’ premier swimmers, and not just in the breaststrokes where he was the SEC Champion. His rise is actually quite reminiscent of Cody Miller’s. Both swimmers won a lot of conference titles in their first two years. Both contribute even outside of the breaststrokes. Both swim the 200 IM as their third event. Both finished 10th in the 200 breaststroke as freshmen at NCAA’s, and scored in no other events. We’ll see if that comparison holds true with Fink lunging toward the top of the B-Final this year (he was 17th last season).

There’s a few overlaps between the shorter IM and the longer. That includes Bosch, Whitaker, and Prenot. There’s also some new faces – the 200 IM field breathed a sigh of relief when Florida’s Sebastien Rousseau opted for the 500 free on the first day instead of the 200 IM he swam at SEC’s. He will swim the 400 IM, however.

There’s two guys who have already been under 3:40 this year. One is Kalisz, the freshman, and the other is Wisconsin’s Michael Weiss. A year ago, nobody would’ve believed that Weiss could hold a 3:39 for two swims in a month. Now, though, he is clearly one of the best college swimmers in the country, especially in his specialties the 400 IM and 500 free. His road to improving on a third-place finish from last year doesn’t look a whole lot easier either, though.

Cal has a group of young swimmers in Josh Prenot and Adam Hinshaw who are both A-finalists potentially. Sam Trahin from Indiana is the one A-finalist from last year’s meet that even most die-hard swim fans probably wouldn’t have been able to recall, despite finishing 4th in the country.

Then there’s the rest of the Florida group: Connor Signorin, Dan Wallace, Carlos Omana, and Eduardo Solaeche-Gomez. Even though they all added time at NCAA’s last year (some more than others – Signorin and Omana close to four seconds each), all either look like better swimmers this year, or are better lined up for this meet. I think that Wallace and Solaeche-Gomez will give the best runs, and could give Florida three into the top 8.

Top 8 Picks for each race, plus seed times:

Darkhorse: Nejc Zupan, Dartmouth, 1:43.94 – Zupan was a star at the Ivy League Championship meet, and crushed conference records in both IM races. Here, he’s dropped the 400 IM in favor of the 100 breaststroke, but will still be swimming this 200. He, like Fink, Kalisz, and Miller, is an outstanding breaststroker.

Darkhorse: Couldn’t find one that I really liked that I thought would qualify as a true “darkhorse,” so I punted on this one.

Nice job writing these articles! All have seemed very insightful and it shows that you have put a lot of work into this. Keep up the great work!

What about dylan bosch in either of the IM events? Not even predicted in the top 8?

Its ridiculous not to have Bosch in either of the finals. If he goes the same times he’ll be looking at at least 5th place in both.