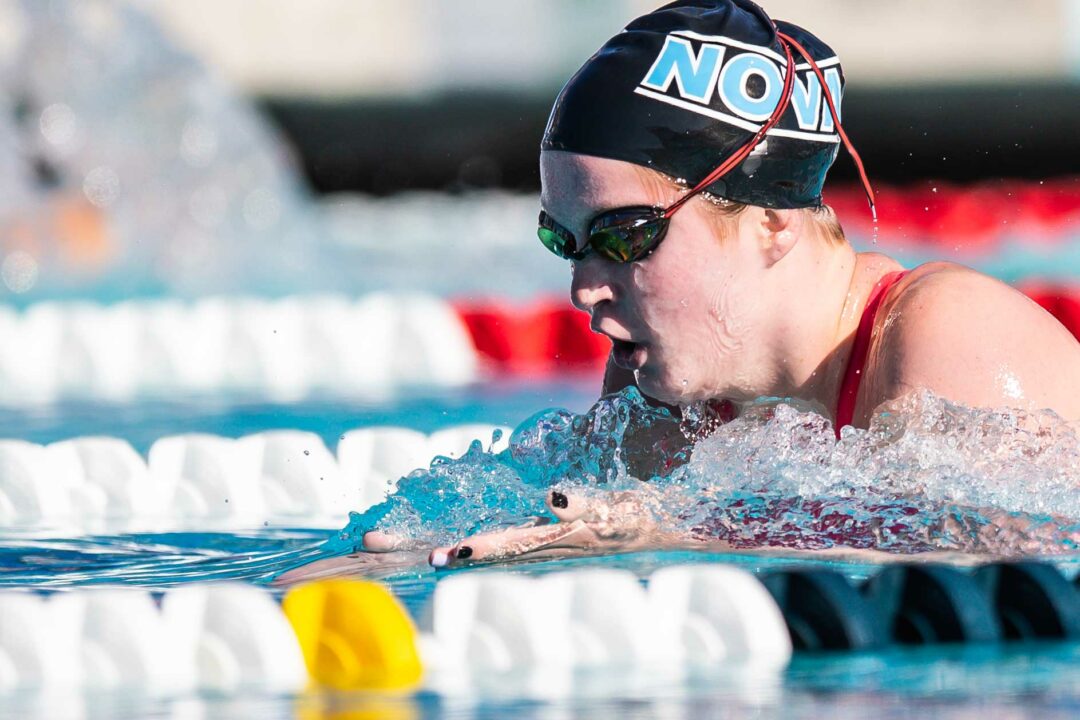 La Mirada Armada hosted the 2022 Kevin B. Perry Senior Meet this past weekend, featuring some of the best and brightest young swimmers in California. Stock photo via Anne Lepesant

La Mirada Armada hosted the 2022 Kevin B. Perry Senior Meet this past weekend, featuring some of the best and brightest young swimmers in California. The meet was highlighted by La Mirada Armada’s Kayla Han shattering the 13-14 girls 400 IM National Age Group Record, which you can read more about here.

O’Dell carried that momentum into the next day, where she swam a personal best of 52.97 in prelims. She went on to finish second in finals, swimming a 53.65, while Irvine Novaquatics’ Maggie Schalow (18) won the race in 52.71, marking a lifetime best for the Virginia recruit. O’Dell also won the women’s 100 breast that day, clocking a 1:01.37 after swimming a 1:01.03 in prelims.

Mission Viejo Nadadores 17-year-old Asia Kozan, the younger sister of Justina Kozan, who now swims for USC, had a phenomenal meet as well. The younger Kozan is set to begin her collegiate career at UCSD next fall. She got out to great start at Kevin Perry, swimming a 1:58.20 to win the women’s 200 IM, also marking a massive personal best. Kozan came into the meet with a 2:01.34 and wasted no time shattering that time with a prelims swim of 1:58.65 before swimmer her 1:58.20 in finals. She swam a great race all around, splitting 25.71 on fly, 30.74 on back, 34.00 on breast, and came home in a sizzling 27.75.

North Coast Aquatics 17-year-old Kathryn Hazle, a Cal commit for next fall, was another swimmer who lit it up at the meet. Hazle kicked her meet off with a second-place finish in the women’s 1000 free behind Han, swimming a new lifetime best of 9:49.34. It marked Hazle’s first time under 9:50 in the event.

She went on to swim another personal best the next day in the 500 free, speeding to a 4:45.09 for a third-place finish. Hazle followed that up with a 1:58.71 in the women’s 200 IM final, where she closed the gap on Kozan on the back half of the race, but ultimately touched second by half a second.

In arguably her best race of the meet, Hazle posted a second-place finish in the women’s 400 IM final, roaring to a massive new personal best of 4:07.44. Like Kozan, she was great on the fly (57.64) and free (57.02) legs, but where Hazle really made her mark on the race was the breaststroke leg, where she split a stunning 1:08.45. For context, that would have been the fifth-fastest breast split at the 2022 NCAA Championships in the ‘A’ and ‘B’ finals combined.

16-year-old Daniel Li out of Rose Bowl Aquatics had a number of personal bests as well. Li started out in the 500 free, where he swam a 4:30.99. While he finished fifth in the event, Li’s performance marked a lifetime best by a whopping eight seconds. He then went on to drop two seconds in the 50 free, swimming a 21.17 in prelims. In the 200 free prelims, he posted a personal best of 1:40.94.

Alpha Aquatics 17-year-old Tuna Cole was great in the men’s 200 free and 500 free. He won the 200 free, swimming a 1:37.55 after pulling away from the field on the final 50. It was a lifetime best for Cole, taking nearly a second off his previous mark.

Asia Kozan to UCSD is a huge pickup for the program!

I saw it happen, it was absurd. He went a 4:35 in prelims with briefs on

Han at age 10 was going 5k a practice, 6x/wk, from conversation with her coach at that time.

Might have been at age 9. I recall she had a good Far Westerns that year.

That she trained a ridiculous amount at such a young age