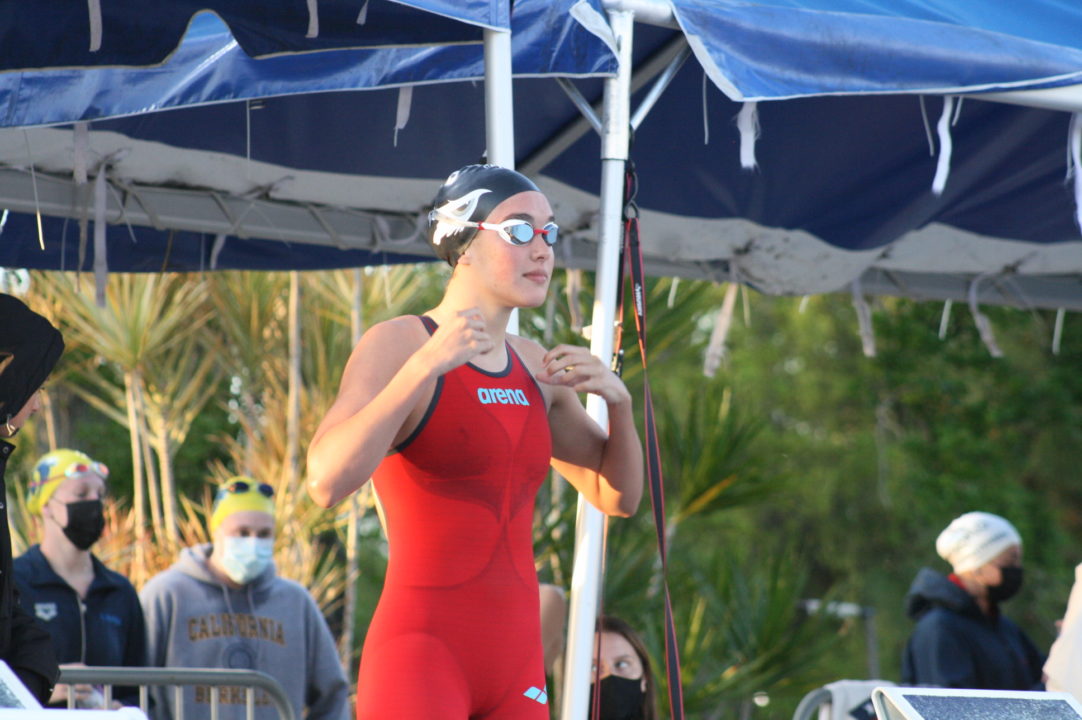 The swim by Erika Pelaez ranks her as the 3rd-fastest American 13-14 in the history of the 100 free and gives her a pass to the faster Wave 2 Olympic Trials. Current photo via Nicole Miller/SwimSwam.com

With the two Olympic veterans Alia Atkinson and Bruno Fratus, along with Saturday night’s rainstorm, moved on, it was time for the teenagers to shine on the final night of the Piranhas Senior Invite in Florida.

Pelaez’s swim now ranks her as the 3rd-fastest American 13-14 in the history of the event, behind only a pair of Olympic medalists.

Under the new two-tier USA Swimming qualifying system, she’s now eligible to swim all races at the faster Wave 2 meet where she has at least a Wave 1 cut. That includes now the 50 free and 100 back.

This week, she won those races along with the 200 free and the non-Olympic 50 back. She also swam a best time of 2:17.72 to finish 3rd in the 200 backstroke on Sunday – the only non-winning finals swim of her meet.

That 200 back victory went to 16-year old Julia Podkoscielny, who swam a new best time of 2:14.16. That gives her a new Olympic Trials Wave 1 cut in the event.

A third Olympic Trials cut went on the board from a teenage girl on Sunday when Maddie Smutny opened the finals session with a 2:14.37 win in the 200 fly. Smutny, a high school sophomore, swims for SoFlo Aquatics (the same club as the aforementioned Atkinson).

Smutny is now the fastest 15-year old in the country in that event this season by half-a-second.