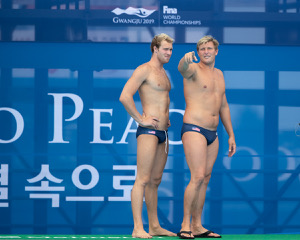 Nine of the twelve will compete in Greece to play in the Ethniki League while the other three will be headed to Hungary, Croatia and Italy. Archive photo via “Rafael/Domeyko Photography”

Irvine, CA – August 7 – Twelve Men’s National Team athletes have been signed by European teams for the upcoming or current club water polo season. Nine of the twelve will compete in Greece to play in the Ethniki League while the other three will be headed to Hungary, Croatia and Italy.

“We are very excited to have so many of our athletes get the opportunity to compete in high level water polo in Europe. This will be a great chance for our team to continue to improve with meaningful competition and only strengthen our preparation as we get ready for the Tokyo Olympics next summer,” said USA Men’s National Team Head Coach Dejan Udovicic.

Highlighting the transfers are Ben Hallock to Pro Recco, Max Irving to Olympiacos, Alex Bowen to Apollon and Alex Obert to VK-JUG.

Ben Hallock is on his way to Pro Recco in Italy following an amazing college career at Stanford that included winning two Cutino Awards and one NCAA Championship while scoring 194 career goals. Pro Recco compete in Serie A1 and have been a dominant force in Italian water polo, winning 33 Italian League Championships including the last 14 in a row along with 14 Coppa Italia’s. They’re also well-known on the international stage having won eight LEN Champions League titles and six LEN Super Cups.

Max Irving is heading back to Greece where he will play for Olympiacos following his past stint at Hydraikos. Olympiacos is one of the best teams in Europe having won 34 A1 Ethniki League Championships including the last 8 in a row. They are also two-time LEN Champions League winners and have won a record 21 Greek Cups and 4 Greek Super Cups.

Alex Bowen is on his way to Apollon in Greece fresh off winning the Adriatic League with Mladost Zagreb in Croatia. Bowen scored 49 goals with Mladost and appeared in the LEN Champions League. Apollon are coming off a 4th place finish in the A1 Ethniki League.

Alex Obert will make his way to VK-JUG in Croatia following his past season at Hydraikos. VK-JUG have been a force in Croatian water polo for many years having won 37 Croatian and Yugoslavian League Championships including the last four in a row. They’ve also won 16 National Cups, four Adriatic League Championships and are four-time winners of the LEN Champions League.

Dylan Woodhead, Ben Stevenson, Chancellor Ramirez, Johnny Hooper, Bennett Williams and Drew Holland will be joining Bowen and Irving in the A1 Ethniki League. Woodhead and Stevenson will be competing for Glyfada who finished the 2019-20 season in fifth place. Ramirez and Hooper will be teammates at Palaio Faliro who are coming off of a seventh-place finish. Williams and Holland will be heading to Chios who finished the previous campaign in eleventh.

The USA to Greece pipeline continues as Matt Farmer gets set to cap up for Peristeri meanwhile Men’s National Team newcomer Kacper Langiewicz is currently in Hungary competing for Kaposvari in the Hungarian league.

“From my time as a player and coach, I’m very familiar with all the programs and leagues our athletes will be competing in and I’m appreciative of the opportunity to work with these club leaders to add great talent to their teams,” said Udovicic. He added, “we are looking forward to announcing other opportunities abroad for members of Team USA in the coming weeks.”

Alternative headline : US Water Polo team & flees the US .