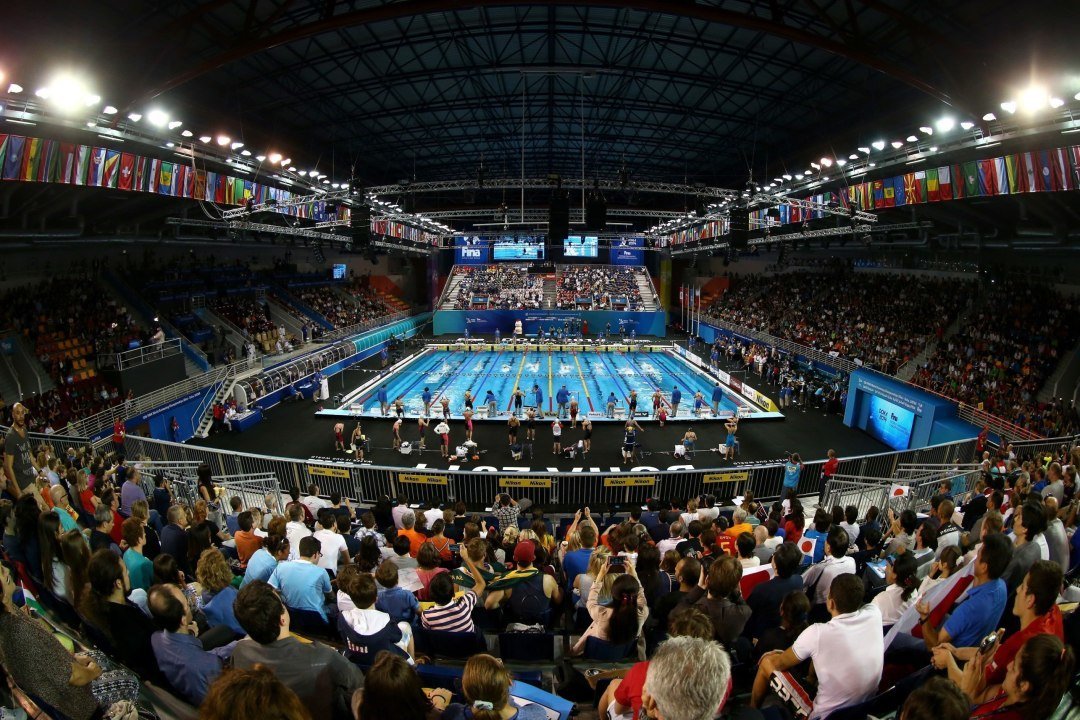 The 2014 Short Course World Championships have wrapped up in Doha, Qatar. Here are 5 big things we noticed, and 5 things you pointed out in the comments section: Current photo via FINA

The 2014 Short Course World Championships have wrapped up in Doha, Qatar. Here are 5 big things we noticed, and 5 things you pointed out in the comments section:

1. Le Clos sweeps fly, but still has carrot left: South African Chad le Clos achieved half of his stated goal for Doha – he swept all three butterfly races, but was only able to break one of the three world records he was aiming for. For swimming fans, this couldn’t be more perfect. Even though Doha was short course, Le Clos sweeping the 50, 100 and 200 fly makes him the man to beat in any butterfly event (short course or long course) in the coming years.

That sets up an amazing showdown with the un-retired Michael Phelps, who held that role before Le Clos did. We’ve got plenty more time to let the drama heat up before the two actually meet with Phelps suspended, but it’s possible the first meeting between the two will be in short course, at the 2015 Chartes World Cup. Phelps will reportedly return to competition with that meet, while Le Clos is a staple on the World Cup tour and the winner of the past two seasons. Phelps will certainly have something to prove, and now Le Clos has reason to stay hungry as well, with the 50 fly world record still standing as unfinished business after Doha.

2. Cielo strikes back: Brazil’s Cesar Cielo holds the long course and short course yard 50 free records, and had a shot to unify all three splash-and-dash records in Doha. But the 50 was a big disappointment for Cielo, who watched Florent Manaudou take the world record and faded nearly out of medal contention, only taking bronze by .01 over Vlad Morozov. That even prompted some speculation as to whether Cielo, nearly 28 years old, was starting to lose ground against the next generations of sprinters. But Cielo promptly answered those concerns with a brilliant day 5 that included a 100 free win over Manaudou and a brilliant 44.67 split on the end of the gold medal-winning Brazilian medley relay.

3. First gold medal for a Brazilian woman: Staying in South America for a moment, Brazil also had a big swim on the women’s side, with Etiene Medeiros winning the nation’s first-ever individual World Championships gold medal on the women’s side. For a nation that’s had some high-profile successes like Cielo in the men’s events, it’s promising to see the other half of the gender pool start to rise as well. With the 2016 Olympic Games happening right in Brazil’s backyard, there’s no doubt the country is looking for a big showing, and rising talents like Medeiros make that an exciting prospect.

4. Dutch women sweep free relay world records: The women of the Netherlands tore through the free relays this week, setting new world records in all three distances. The 4×50 free relay, which they got on day 5, was probably the least difficult to break, given that the record has only been officially kept for a few years. Still, Ranomi Kromowidjojo‘s 22.88 split helped make the event one of the big highlights of the day. Also impressive: Kromowidjojo, Inge Dekker and Femke Heemskerk showed great range, swimming well on all three relays to break the world marks.

5. New World Records in 21 of 46 events: A week that saw an all-out assault on the record books ended with new times on nearly half of the world records. 21 different events ultimately had their records broken, 6 on the men’s side and 14 for the women, with 1 mixed relay. Some more stats: 7 relay records went down, and only 1 was a mixed-gender event, where the very new records are relatively easier to attain. 14 individual events saw their records shattered, including multiple records by 4 different swimmers: Katinka Hosszu (4), Mireia Belmonte (2), Florent Manaudou (2) and Sarah Sjostrom (2).

6. Lochte holds his own on medley relay: With some fans upset at Ryan Lochte‘s anchor split on the men’s medley relay, commenter Sven provides some context in favor of the American veteran:

Eh. When your anchor is swimming the same times as Vlad and Cameron McEvoy, it’s hard to be too mad. Lochte was the best choice available, quit complaining.

Our take: Sven’s got a solid point here. The finish order of that medley relay was much more a result of Cielo’s brilliance than any failure on Lochte’s part. This has got to have some PTSD flashbacks for Lochte, who also took some unfair criticism after the 4×100 free relay at the London Olympics, where Yannick Agnel pulled out an otherworldly split to beat the Americans, despite Lochte swimming fairly well.

Our take: Hosszu went on to add a silver in the 200 free to finish with 4 golds, 3 silvers, 1 bronze and four world records. That’s 8 medals without a single relay event. Very impressive for one of swimming’s toughest.

8. How to rattle Le Clos, according to the SwimSwam comment section: This comment exchange between Rafael and SwimFanFinland gains inclusion for pure comedic value:

Our take: Le Clos take a lot of heat for his tendency to peek at his opponents mid-race. Count us among those that really want to see if the “smile method” can throw the world’s best butterflyer off his game.

10. Quick turnarounds for Lochte: For an aging swimmer trying to lighten his workload with relatively shorter races, Ryan Lochte still had a tough lineup on day 5, as observed by commenter SwimFanFinland:

Men’s 100m IM next. Another chance for Lochte. Not much recovering time for him though.

Our take: Swimming anything after a 200 back is difficult. Lochte went from the 200 back to the 100 IM with very little rest, then came back and anchored the medley relay later on. The fact that Lochte could perform pretty well in all three coming off a serious knee injury and only a partial season of training would seem like a promising sign for the 30-year-old.

I finally saw that final medley Men’s relay . Lochte did an amazing split considering all the races he had under his belt after 5 days . I am still amazed how he can pull out such swims and he is not a sprint specialist . Cielo did catch Lochte only on the last 50 with a blazing split ; this shows how well Lochte swam . Very nice championships overall .