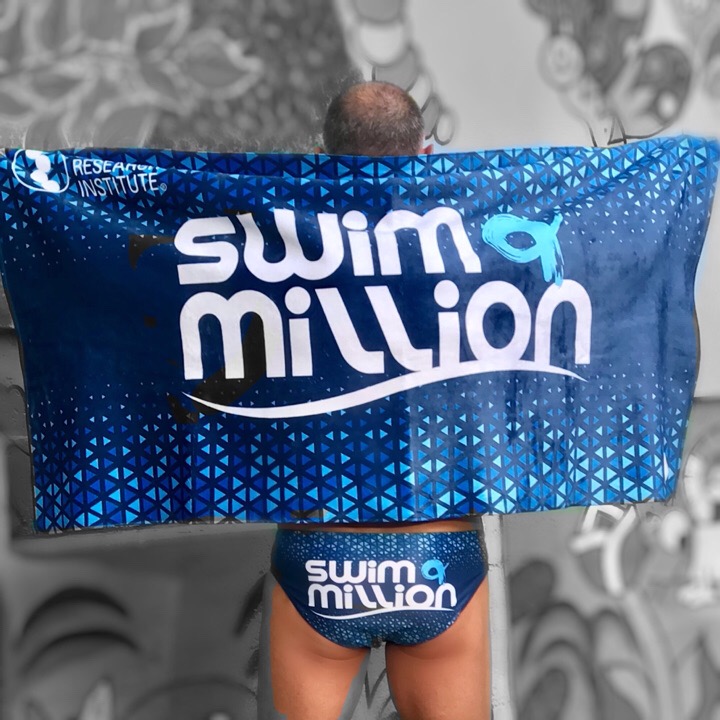 David has pledged to Swim A Million yards in 2020 and has dedicated his efforts to raise money to support The Cancer Research Institute. Current photo via ZUMO

2020 has been a year of uncertainty and challenge, but as a sport swimming has had moments and people to celebrate. David Miller is not an elite swimmer, but he does made up the vast fabric of our aquatic culture, and he’s a shining example of how and why we endure.

David has pledged to Swim A Million yards in 2020 and has dedicated his efforts to raise money to support The Cancer Research Institute.

Last month David partnered ZUMO to help raise money to support his cause. ZUMO designed a selection of retail products and set up an online shop for him–donating the profits from the merchandise sales directly to the Cancer Research Institute on his behalf.

David has completed 926,000 yards so far and raised nearly $18,000 for the Cancer Research Institute, and he’s on track to complete his swim on Sunday December 27th!  David has planned a socially distanced on deck celebration for community members to cheer him to the finish line, complete with t-shirts & swim caps for the participants who swim alongside him to the finish.

LEARN MORE ABOUT DAVID’S PROJECT HERE (and below)

It’s been a tough year for everyone. A global pandemic, social and racial unrest, political discord, and natural disasters running the full gamut from wildfires to hurricanes and tornadoes. As bad as all this has been, imagine adding cancer to the list.

Imagine hearing your child’s doctor tell you that your 3-year-old has a brain tumor. Or, because of COVID, your best friend has had her chemo treatments suspended because it’s just too risky to go to the hospital.

Regardless of your race, age or nationality, whether one is battling the disease personally, watching a friend or family member suffer, mourning the loss of a loved one or acting as the caregiver of someone fighting to beat the odds, we’ve all been hit by cancer.

My name is David Miller and I seem to be surrounded by those who have been afflicted. My father passed away in 2014 after battling valiantly to overcome lung cancer. My mother has had three different bouts of cancer over the past 30 years and my sister, just recently, one as well. Thanks to early diagnosis, fast and effective treatments, and a little bit of luck, both are cancer-free and living well. A dear friend – a father of 4 – is in treatment as I write this. A close cousin is still in a longtime fight with leukemia . . . and the list goes on and on: immediate family and distant relatives, dear friends and casual acquaintances, colleagues, clients, fellow swimmers, tennis buddies. The numbers are bewildering.

See who I swim for

Because of those numbers, you’re reading about my new project.

I started back on January 1, but there have been a few roadblocks. Now I’ve got 60 days to reach my goal and those same two months to reach my fundraising objective.

I’m swimming a million yards in 2020 and working to raise funds for the Cancer Research Institute.

Some would say that’s an outrageous distance. Avid swimmers might say that it’s not that big of a deal. To put things in perspective, young, competitive swimmers might swim as much as 2 million yards or more in a year. Swimmers known as “Masters” may approach a million yards. But given the year of craziness that we’ve all had, it hasn’t been easy.

. . . but not necessarily when the pool shuts down, or you have to sneak in with a wetsuit when they’ve shut off the filters, chlorinators and heaters . . . or when, due to smoke from forest fires, the air quality is worse than the most polluted cities in the world.

I was ahead in January but then fell behind in March. Even with extraordinary support from a whole bunch of folks, I fell farther behind as the months went by. It wasn’t until July, as restrictions eased, and with weeks of swimming on originally planned rest days, that I was able to catch up.

August arrived and so did the fires; another setback. September was less complicated and October, with no major roadblocks, was great. I’m on track and have every intention of reaching the million-yard mark by the end of the year!

Why the Cancer Research Institute?

It’s an extraordinary organization doing great work enabling a global network of scientists and doctors to advance understanding of the immune system and how it interacts with cancer, resulting in new treatments and improving outcomes.

But why a fundraiser?

When I turned 50 almost a decade ago, I crossed the country three times on my bicycle and rode in every state. Something I called Bike 50 at 50. I even took the ferry to Alaska and a flight to Hawaii to make sure that I covered every state. Max, my Weimaraner came along for 46 of the states and I was hoping to raise funds for CRI. While I completed my goal of riding more than 15,000 miles in 54 weeks, I didn’t come close to my fundraising target.

My shoulders ache, I’m always tired, and some mornings, this middle-aged body just wants to stay in bed. Nonetheless, I’m confident that I’ll be able to maintain the pace through these last two months and reach my swim goal. I’m gonna get there!

I’ll finish the swimming . . . YOU can help me fundraise to beat cancer!

Go to my donation page and follow the prompts. Your donation will go straight to the Cancer Research Institute. Every dollar counts. Small, big or huge, every donation helps, so please, give whatever you can.

And finally . . . if you’re a swimmer? Come swim with me someday! Check out Soda Aquatic Center at Campolindo High School in Moraga, Ca. You’ll find all the pertinent info here.

If you have any questions, send me an email. I’ll get right back to you.

Swimming news is courtesy of SWIM A MILLION and ZUMO, a SwimSwam partner.

Best wishes David on your final month of swimming to reach your goal. Very very inspiring !!