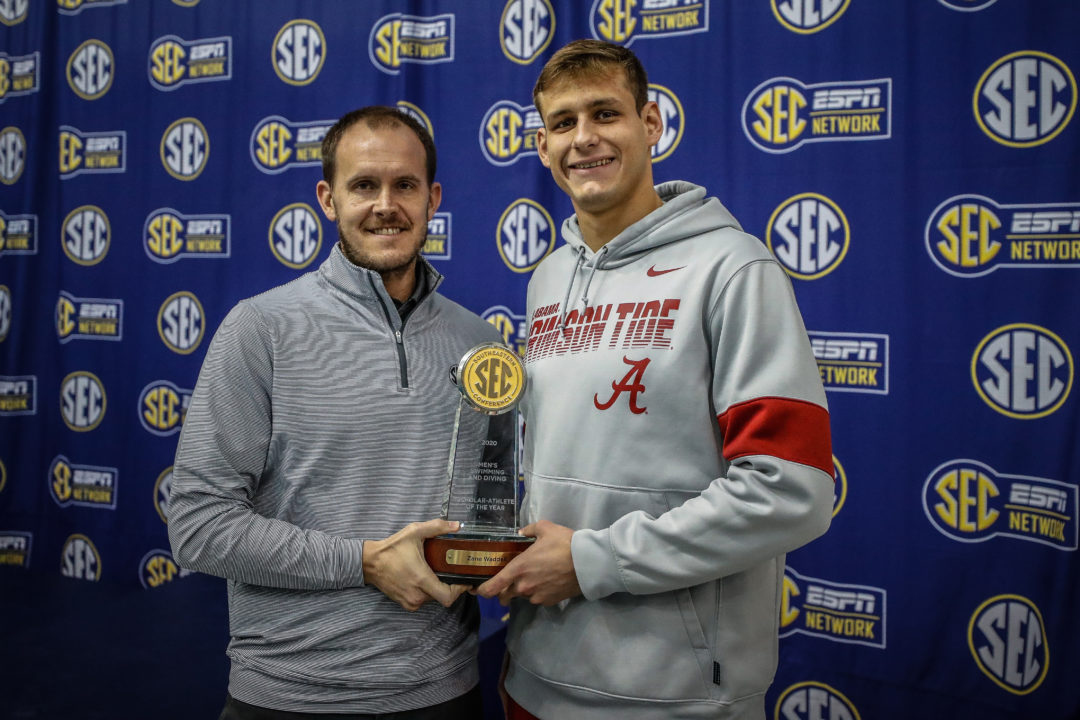 The senior’s honor marks the fifth year in a row that an Alabama swimmer has been named the league’s top swimming and diving scholar-athlete. Current photo via Alabama Athletics

The senior was named a Spring 2020 Outstanding Leader, becoming the first student-athlete to garner this honor since 2015.

AUBURN, Ala. – Alabama senior Zane Waddell was voted the Southeastern Conference Male Swimming and Diving Scholar-Athlete of the Year by the league coaches, it was announced Friday in Auburn, Ala., during the fourth day of the 2020 SEC Championships.

“This is a great honor for Zane, one that really highlights the work and focus he puts into both his academics and athletics,” UA head coach Coley Stickels said. “To earn this honor on the same night that he wins the 100 backstroke in a new SEC record time is especially fitting. I know he’s proud to continue a great tradition our men have when it comes to this honor.”

Waddell’s win marks the fifth year in a row that an Alabama swimmer has been named the league’s top male scholar-athlete, following Connor Oslin (2016 and 2017), Luke Kaliszak (2018) and Robert Howard (2018).

A native of Bloemfontein, South Africa, Waddell is a three-time CSCAA First Team Scholar All-American, a 2019 NCAA champion in the 200 medley relay, the 2019 World Champion and World University Games Champion in the 50-meter backstroke and WUG record holder in the same event. He is also a 15-time All-American and has won eight Southeastern Conference titles to date, including the 100 backstroke, 50 freestyle and 200 freestyle relay this week. He is also an SEC record holder in the 100 backstroke and as part of the Tide’s 200 medley relay and 200 freestyle relay.

Waddell is slated to swim on two more relays as well as the 100 freestyle before the championships come to a close Saturday night.

What we’re his “scholar” credentials? Seems odd that the academic accomplishments wouldn’t be mentioned.

He’s a management information systems (more or less computer science with a business focus)/finance double major. Not sure what his GPA is, but managing a double major within four years (likely with no credits from high school, seeing as he’s an international) along with swimming is pretty impressive. Those are some long hours to work.

Thanks for this info. Sounds like it’s well-deserved, just wish the original release had given the background on his academics as well as his athletics, as I interpret any “scholar-athlete” award to be about excelling in both areas.

As strong as Zane is athletically and academically he’s just as good a person and teammate.