YMCA Star Komarov Among 13 in Class for Ohio State Men 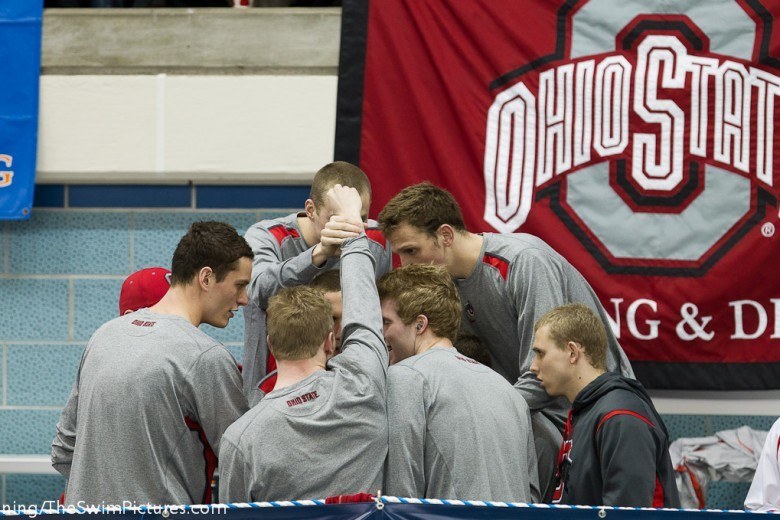 The Ohio State men’s program has just graduated a majority of their top-tier freestyle group. Of the 12 spots on...

The Ohio State men’s program has just graduated a majority of their top-tier freestyle group. Of the 12 spots on their 9th place 200 and 11th place 400 free relays, they graduated 6 out of 8 spots.

It was no secret what the recruiting targets were this fall, either, as their 13-strong class (12 swimmers, 1 diver) is ripe with 50-200 freestylers.

Among the 12 are five guys coming out with 45-second flat-start bests in the 100 freestyle: Andrew Appleby, Mark Belanger, Charlie Fry, Vladislav Komarov, and Micah Simpson. That includes 45.1 for Komarov and 45.0 from Belanger.

They defended home turf fairly well, as four of those five guys come from the state of Ohio, as do 10 of the 13 recruits altogether (though, quite a few like Josh Quallen – Louisville – and Cliff Goertemiller – Harvard – did go outside of the state lines).

The Buckeyes have also brought in some long-term help for their 800 free relay; that group only graduated one from last year, Zach Holmes, but despite using their stud Tim Phillips on the relay, it failed to score any points at NCAA’s, ending up just 18th (four seconds slower than their season best.)

Komarov is a really interesting story; he’s initially from Russia, but has spent the last year-plus in Pennsylvania at the Upper Main Line YMCA in search of an NCAA scholarship. Meanwhile, he’s been a force at the YMCA National Championship meets, and has become a top-level prospect.

Going along with the theme of keeping talent home, the addition to their diving program, which has been very good the last few years, is Alex Gonzalez from Central Catholic in Canton. He’s the 2013 State Champion, and Division II State Record holder, on the 1-meter.

Looking beyond those relay losses noted (including especially Jason Schnur), the Buckeyes come back in pretty healthy shape next season: they bring back 17 point scorers from the 2013 Big Ten Championships.

The full press release from the Buckeyes is below.

COLUMBUS, Ohio – The Ohio State men’s swimming and diving team has signed a 13-member incoming freshman class, a group of National Letter Intent signees that include nine top swimmers and one decorated diver from Ohio, standouts from Wisconsin and Connecticut and two impressive international swimmers.

“We are pleased with this class and believe they will become excellent leaders for the future of our team as well as outstanding contributors for our next championship team,” said head swimming coach Bill Wadley, who will be entering his 25th season at Ohio State. The Buckeyes return 17 point scorers from the 2013 Big Ten Championships, including 14 swimmers and three divers.

Solid looking group of swimmers for OSU. ‘Vlad’ is a hot name in swimming right now, I’m sure the Buckeyes are hoping their Vlad, along with the rest of this group can get them to Championship form and help them contend for another Big Ten title.