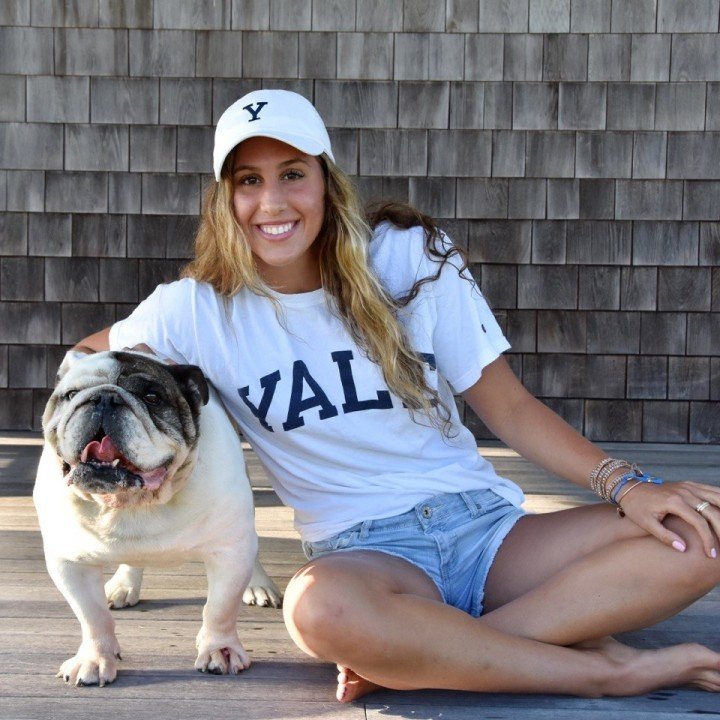 Scarsdale, New York's Bebe Thompson has made a verbal commitment to the Bulldogs for 2016 and beyond. Current photo via Bebe Thompson

The Yale University Women’s Swimming and Diving Team has pulled in two solid recruits from the high school class of 2015. Beatrix “Bebe” Thompson, who swims for Empire Swimming in Westchester, New York, and South Jersey Aquatic Club’s Sophie Fontaine have made commitments* to Yale University’s class of 2020.

“I am beyond excited to be a Yale Bulldog. Yale is everything I want in a school and collegiate swim program: Yale has an awesome vibe, I love the team, and Jim Henry’s passion and commitment to his team and this sport is inspiring. BOOLA!”

Thompson is a senior at Scarsdale Senior High School where she is a USA Swimming Scholastic All-American. Her top times over the last two seasons include:

Thompson is a nice, versatile get for the Bulldogs. Her 200 fly time would have placed her in the “A” final at 2015 Ivy League Women’s Championships, along with Yale then-sophomores Sydney Hirschi and Isla Hutchinson-Maddox. In addition, both her IMs would have been A-final worthy. Yale has been on the rise over the last several years under Coach Jim Henry; the Bulldogs are inching their way to the top of the Women’s Ivy League standings, and with a few more recruits of Thompson’s stature they might get there sooner rather than later.

“I’m so excited to have committed to Yale. It is where I feel I will be the most supported, both as an athlete and as a student. The team is amazing and so close, and coaches Jim Henry and Kerry Smith have amazing plans and goals for the future that I can’t wait to be a part of!”

A senior at Haddonfield Memorial High School in Haddonfield, New Jersey, Fontaine is a well-rounded athlete who will be able to fill in pretty much anywhere Coach Henry needs her. Fontaine placed second in both the 200 free (1:48.68) and 100 back (55.74) at the New Jersey High School Meet of Champions last February. She also led off Haddonfield’s 200 medley relay (25.98) and swam on their 400 free relay (55.76). Fontaine swims for South Jersey Aquatic Club; her best times over the last two years are:

*DISCLAIMER: Neither Thompson nor Fontaine has been officially accepted to Yale. As is true with all Ivy League schools, Yale’s Admission Office will not send its acceptance letter until the beginning of December, along with those of all Early Action candidates. The procedure for a recruited athlete like Thompson or Fontaine is for Admissions to review (her) transcript and SAT scores, “support (her) application for admissions in the fall,” issue a Likely Letter, then offer (her) acceptance into the class of 2020.

Congrats Bebe! Tigers over bulldogs any day, but I’ll still be in your cheering section 😉