Yale Finishes Out Week of Competition With Convincing Win Over Rutgers 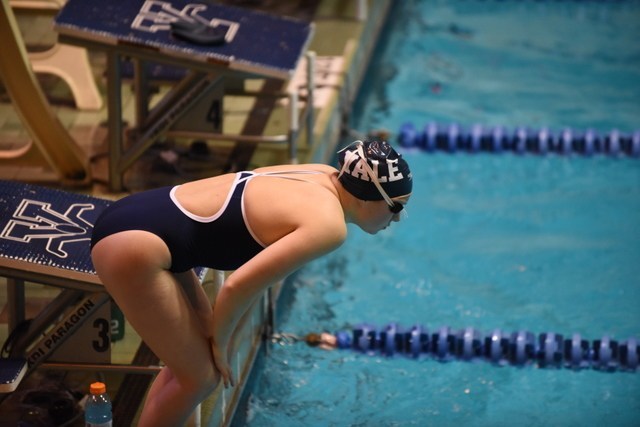 Yale beat their 4th opponent in their 3rd meet in the past week, beating Rutgers on the road in a shortened dual meet featuring the 100 of each stroke, 200 IM, 200, 500, and 1000 free, and 200 medely and free relays. Archive photo via Yale Sports Publicity

Rutgers ran the show in diving, going 1-2 in both the 1 meter and 3 meter with Addy Walkowiak winning both by a huge margin and Rachel Byrne coming in 2nd. Walkowiak won both events by a combined 76.96 points. She also leads the Big 10 in both 1 and 3 meter currently.

Francesca Bertotto put up a solid pair of distance wins, especially considering the shortened meet. She posted times of 10:08.35 and 4:56.77, which is her fastest dual meet time of the season in the 500, and 2nd fastest in the 1000.

In the 200-yard medley relay, Heidi Vanderwel, Cha O’Leary, Maddy Zimmerman and Bella Hindley led the competition as Yale’s A-relay and won with a time of 1:41.77. Jacquelyn Du, Ashley Pales, Lili Margitai and Kate Rogers led the B-relay and finished shortly after the A-relay, placing second with a time of 1:46.05.

The Bulldogs will next compete against Seton Hall.  The events will be held on Friday, Jan. 19, starting at 4:00 p.m. at South Orange, N.J. Admission is free for all spectators.

PISCATAWAY, N.J. (Jan. 12, 2018) – Sophomore Francesca Bertottoand junior Vera Koprivova each picked up two event wins on Friday evening as Rutgers swimming and diving dropped a home dual meet to Yale, 145-98, in its first competition of 2018. The Scarlet Knights dominated the diving well with senior Addison Walkowiak sweeping the 1- and 3-meter events while she and her teammates accounted for 29 of 38 available points.

“I was very pleased with our divers,” said co-head coach Frederick Woodruff. “You get through a training trip and it’s a little tough to compete sometimes after the travel and staying in hotels. They regrouped this week, their mistakes were good, aggressive mistakes. It was exciting to see Marin miss qualifying for zones by just eight points, and to see Rachel push Addy as they finished in the top spots.”

Walkowiak began her evening with a win on the 3-meter boards with a score of 343.05, accounting for her fourth consecutive win at the height. With a strong finish, Walkowiak also claimed the 1-meter competition as junior Rachel Byrne finished second behind Walkowiak in both events. Junior Marin Bloise chipped fourth-place points in 3-meter and freshman Lauren Boone took fifth on the 3-meter to help haul in the points.

Bertotto picked up 2018 where she left off in 2017 with winning distance events. Following victories in the mile to close out the year at Rutgers’ Frank Elm Invitational and Princeton’s Big Al Open, the sophomore earned a 4.5-second victory over Yale’s Danielle Liu in the 1,000-yard freestyle in a final time of 10:08.35. One half hour later, she outswam six to take the 500-yard freestyle in 4:56.77.

Koprivova went 2-for-2 in her individual events against the Bulldogs, who came into the dual meet ranked No. 37 nationally by CollegeSwimming.com. She touched in first in both the 200-yard individual medley and the 100-yard backstroke to account for 18 dual points.

“We responded really well to some tough training,” said co-head coach Jon Maccoll. “As a whole team, to win six of the 11 individual events was awesome. We don’t really have the depth right now as a team like Yale does, but we went out and won events. The women we phenomenal at creating their own energy. All the things you want to see leading up to a great meet are in place. The culture is there, the bonding, the cheering and the enthusiasm are all there and they’re having fun.”

Notable performances included a second place finish by sophomore Clare Lawlor in the 50-yard freestyle, and a runner-up placing for junior Francesca Stoppa in the 100-yard butterfly in a dead heat that saw Stoppa edged by a quarter-second.

The Scarlet Knights hit the road for a quad-meet at Ohio State with Michigan and Virginia Tech on Saturday, Jan. 20 at noon.