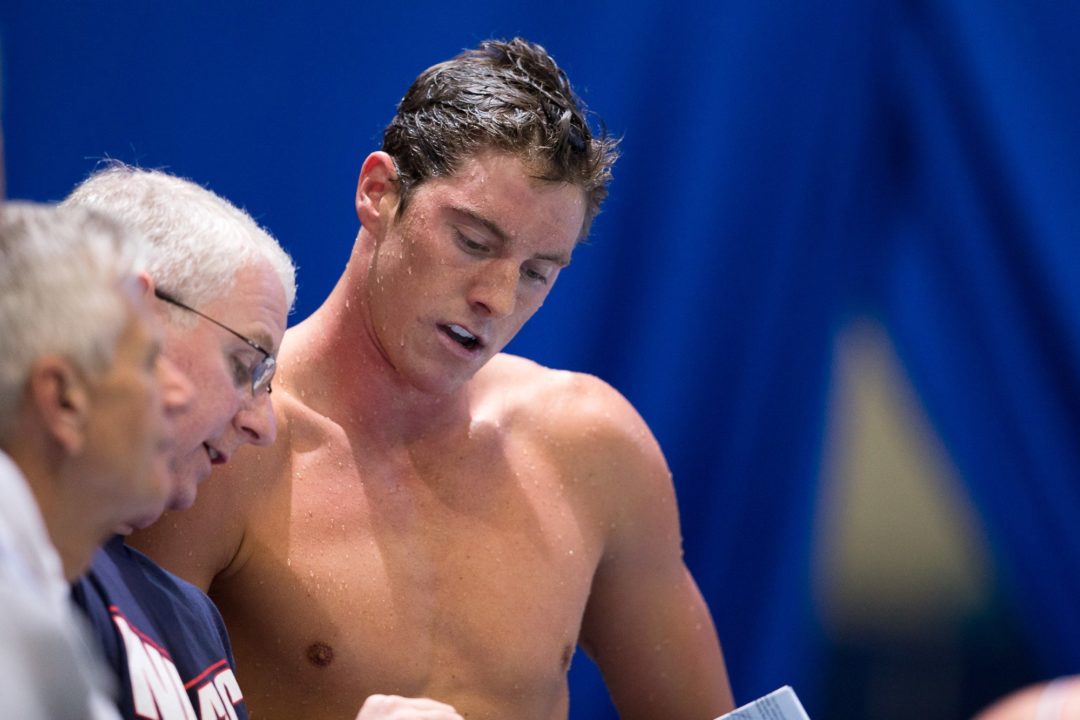 Conor Dwyer Tweeted out his intent to swim at the 2013 Duel in the Pool this week. photo via Tim Binning/TheSwimPictures.com

Today, Colorado will finalize its guidelines for pools to reopen – and the draft guidelines suggest pools could begin opening immediately at 50% capacity.

Britain’s Michael Jamieson was the first big European to confirm his intent to participate at the 2013 Duel in the Pool, which runs December 20th and 21st in Glasgow, Scotland, and now American Conor Dwyer has followed him by confirming his intent to swim at the meet as well.

Though USA Swimming isn’t planning to officially announce their roster until November 1st (at the latest), Dwyer’s silver medal finish at the World Championships guarantees him a spot on the 44-swimmer roster for the biannual meet.

Dwyer Tweeted his intent at a fan who asked if he would be swimming at the Duel on Wednesday.

The Americans have ensured places for the fastest finisher in each Olympic event from the combined results of the World Championships, U.S. Open, and World University Games a spot on the Duel in the Pool roster, plus the top two in the 100 and 200 freestyles, with the rest of the lineup to be filled by coaches’ discretion.

Dwyer will for sure swim the 200 free and the 800 free relay, the latter of which the Americans should be huge favorites, but in the Duel in the Pool format, swimmers are often called upon to swim events well outside of their normal, international range. Despite not sitting upon the selection range for them, expect Dwyer to contribute in the 400 free, the 200 IM, the 400 IM, and maybe even in the 400 free relay in the two-day meet.

Perhaps a good sign for Agnel.
He has just to take the same airplane as his training partner.

He can always get a plane with Lotte a week earlier and come to Herning as well, we’d love to see him 🙂

I am sure the Danish will be involved – Jeanette and Fran (Halsall) were tweeting eachother this week about swimming on a relay together again at the duel. Big names coming out, might the danes be past their peak though? Just a week after a home event they’ll probably rest up for?

I’m confused. The article states that the US has ensured that top finishers from Worlds,US Open and University Games will have a spot. So that means they are taking three per event? Even if the top finishers are not as fast as the 2nd place finisher from nationals?