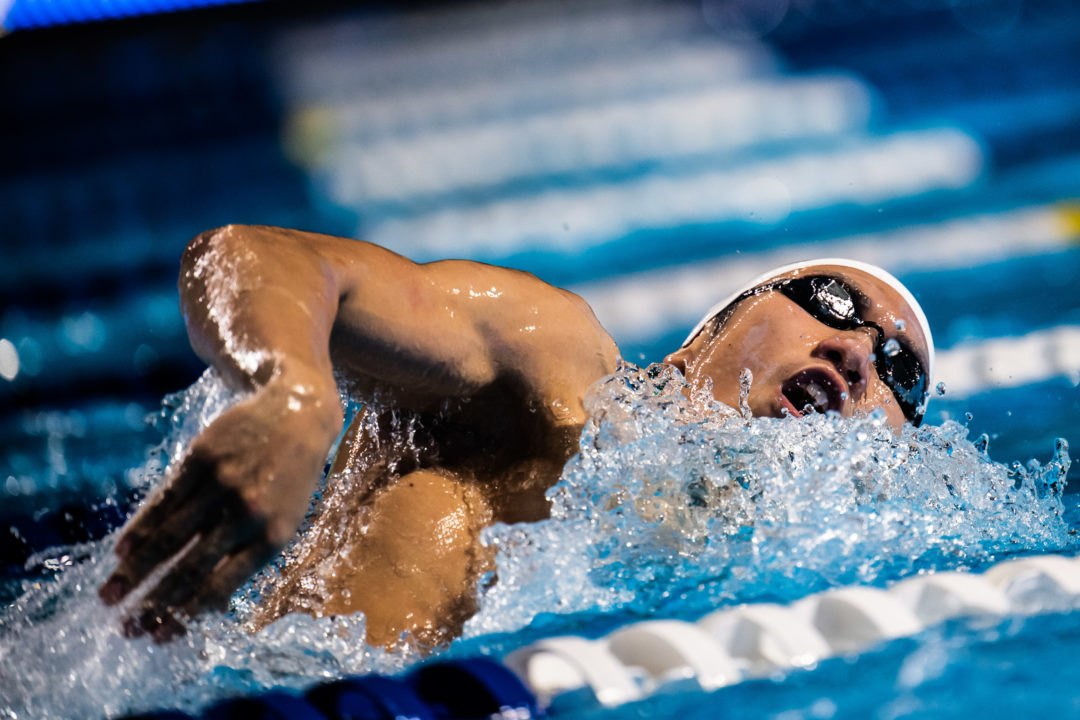 Japan’s Katsuo (Katsuhiro) Matsumoto already made history by becoming the first man from his nation to medal in the 200m freestyle at a World Championships. But now the 23-year-old has leveled up to a new tier of competition in the event, firing off a shiny new national record to kick-off his 2021 racing calendar.

While competing on day 1 of the 2021 Kosuke Kitajima Cup, an annual domestic meet in Tokyo known for wicked-quick performances, Matsumoto blasted a winning 200m free effort of 1:45.13. That not only took the gold in a huge lifetime best, but it also lowered his own national record of 1:45.22, the time it took for him to win silver behind China’s Sun Yang in Gwangju.

Splitting 51.18/53.95, Matsumoto beat the field tonight by over 3 seconds en route slicing .09 off of that 2019 World Championships effort. Although his time dips under the stiff Japanese Swimming Federation (JASF)-mandated qualification time of 1:45.76 needed to compete at home Games this summer, Matsumoto will need to replicate the effort at the sole Olympic-qualifying meet of the Japan Swim in April.

Matsumoto’s result now bumps him up to sit just inside the list of top 20 performers all-time in the LCM 200 free.

The man still has .14 to go before he gets into 1:44 territory, a coveted club with members to the tune of Michael Phelps, Yannick Agnel, Paul Biedermann*, Ian Thorpe, Danas Rapsys and Ryan Lochte. But dropping this kind of performance with the Olympic Trials not yet until April is a very good sign for Japanese freestyle fans.

Matsumoto takes over as the top swimmer in the world in this men’s 2free event this season, setting himself apart by over half a second.

I know that the list of sub-1:45 swimmers toward the end of the article is not exhaustive, however I do feel that Yannick Agnel deserves a mention given that he does hold the textile world record in the 200FR after all. A great swim by Matsumodo though!

Yes, cannot name them all, but he deserves his place, I’ll add. thanks!!

Anybody got the comprehensive list? I’d love to take a look.

I’m not really sure what standard is normally used for “textile best,” but it’s worth noting that phelps and thorpe, at least, were done in body suits, textile though they may have been. I feel like normally “textile best” is used to mean modern suit standards, but I may be wrong.

I’m too old to know what a mizuno is like, but FYI phelps was in FSPro. I did wear that one a bunch, and I’d be very surprised if a jammer brought the same advantage, but like I said I cant really speak to that.

Dave Walters had the 2nd American spot in the individual and didn’t make the final.

What is the asterisk after Biedermann’s name for?

my guess is it was pasted from another article where it had a purpose, and was left in there by accident

Think it’s meant to indicate the WR, but it sure as hell looks like “not legit because supersuit”.

Although tbf, the lad has been 1:44 in textile so it’s a moot point anyway.