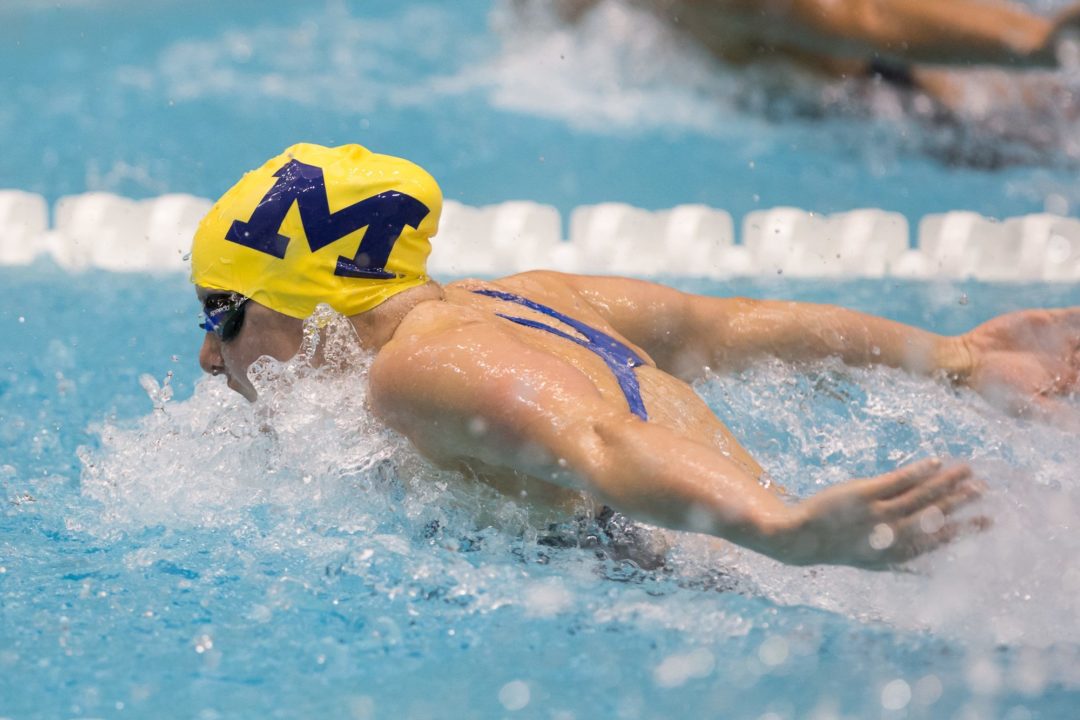 According to an anonymous athlete participating in the meet, no teams are allowed at the pool today, so the meet will be delayed until at least tomorrow. Archive photo via Tim Binning/TheSwimPictures.com

Update: The University of Michigan Athletic’s Department has released a statement on the matter.

The women’s Big Ten Championships, scheduled to start today at the University of Michigan’s Canham Natatorium, has been delayed due to the presence of an intestinal issue in some swimmers. One Big Ten coach who we spoke to says that an emergency coaches’ meeting being held at 2:30 Eastern Time today will determine the plan of action for the meet.

At present, only Michigan swimmers are believed to be impacted by the condition, along with other student-athletes within their athletics department. Right now, norovirus is suspected, but because of the length of the time to test or show symptoms, that’s not certain.

Right now, the pool is being scrubbed and cleaned ahead of the afternoon’s decision, and teams are not being allowed to use either the University of Michigan pool, nor surrounding high school pools, hotel pools, the nearby Eastern Michigan University pool, or any other pool, out of an abundance of caution.

This is the second time in recent years that a major college championship meet has been interrupted due to the Norovirus. Prior to the 2010 NCAA Championships in Columbus, Ohio, nineteen student athletes were hospitalized with flu-like symptoms after being infected.

The coach’s are having a meeting today to decide if they are going to combine the relays into another day or push the whole meet back.

The Norovirus causes all of the typical gastroenteritis symptoms – vomiting, nausea, diarrhea, abdominal pain – and usually begins to manifest 24-48 hours after exposure. It is highly contagious, and all of this means that there could still be new cases reported during the weekend if precautions are not taken. Assuming the athletes are properly treated, they are not in any grave danger, as most of the 300 deaths caused by the disease in the U.S. every year are a result of weak immune systems and not treating the dehydration that can accompany the symptoms. Athletes with O blood type, however, should take extra care, as they will be more suceptible.

This is a developing story. More information will be released as it becomes available.

Actually there is no official delay yet. There will be a meeting at 2:30pm est to determine any possible changes to the schedule.

Interesting that type O blood types are more susceptible. Chlorine is probably the best thing against the norovirus yet the virus itself is highly contagious.

Indiana U Source – that is incorrect. A meeting will be held at 2:30 to decide what will happen. This is confirmed by two coaches from separate programs, as well as in writing from the Big Ten office.