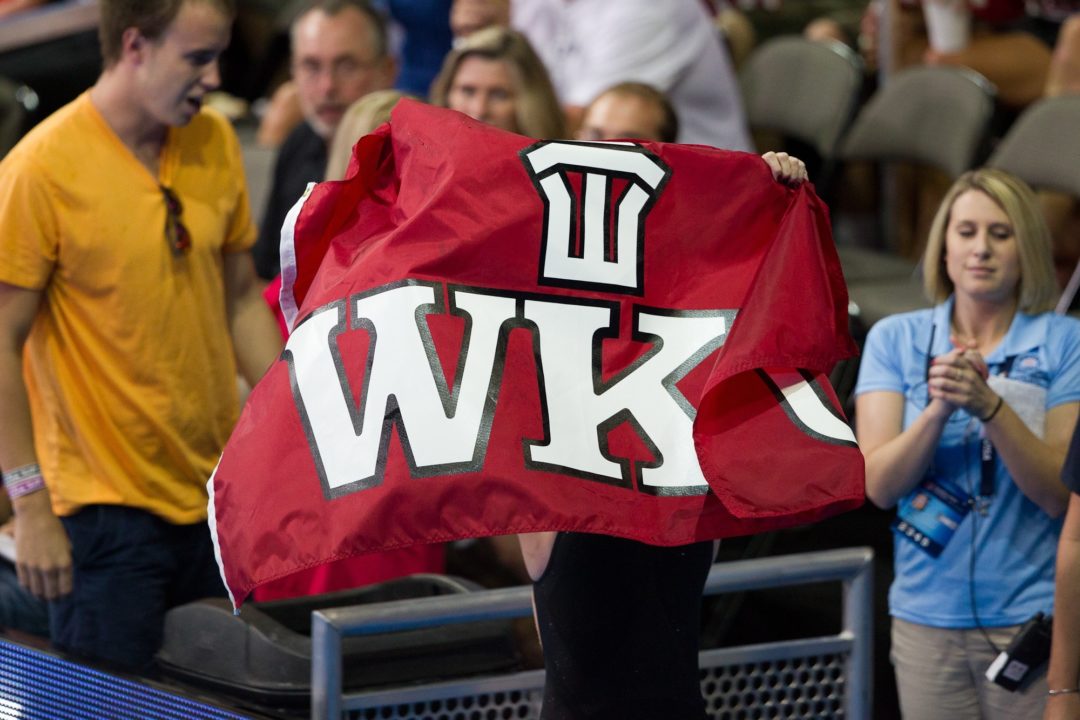 The Western Kentucky University swimming and diving team opens its 2013-14 season onSaturday, October 12 when the team travels to Delta State to take on the Statesmen and Lady Statesmen at 1 p.m. in Cleveland, Miss. photo via Tim Binning/TheSwimPictures.com

The Western Kentucky University swimming and diving team opens its 2013-14 season onSaturday, October 12 when the team travels to Delta State to take on the Statesmen and Lady Statesmen at 1 p.m. in Cleveland, Miss.

Audio for the meet will be available via Delta State’s athletics website, GoStatesmen.com.

“Delta state is a very nice program,” said ninth year head coach Bruce Marchionda. “They do a great job down there. They have a phenomenal facility, so we are excited to go down there and get things rolling.”

Delta State won’t be a new opponent for WKU, as the teams faced off last year in Bowling Green with the Hilltoppers taking a 166-124 win and the Lady Toppers earning a 188-83 victory. WKU is now 4-0 against Delta State in program history.

It will be the second meet of the season for Delta State, as the team lost to Alabama in its opening meet. Both the women and men are ranked for Delta State in the College Swimming .com poll for Division II schools, with the women coming in at No. 7 and men at No. 8.

For WKU, Marchionda is hoping to get an idea of where the team is at since the team has 22 newcomers competing for the first time with the red and white.

“In practice we have a good idea of where we are and what we are doing, but when it is time to get up and race, we have a lot of new faces to the program, so we don’t know how they are going to react in those situations,” Marchionda said. “It will be a very good learning tool for us. I think it is a great opener for us because then we are going to have to turn around in two weeks and go against an extremely strong Big 10 team in Northwestern, so we are looking forward to getting on the road this weekend and getting some competition under our belt. I think all the swimmers are getting antsy to get up and race, so I think it should be good.”

In last year’s season opener with Delta State, 15 different Lady Toppers and Hilltoppers won events in the meet, including five winning multiple contests. For the returning women, junior Ashley Forsyth won the 500 and 1000 free, junior Allie Duff took the 100 and 200 back and junior Claire Conlon took the 100 and 200 breaststroke. On the men’s side, senior Heitor Rodrigues won two fly events (100, 200) and one free event (100).

This release was provided to SwimSwam courtesy of Western Kentucky University swimming and diving.