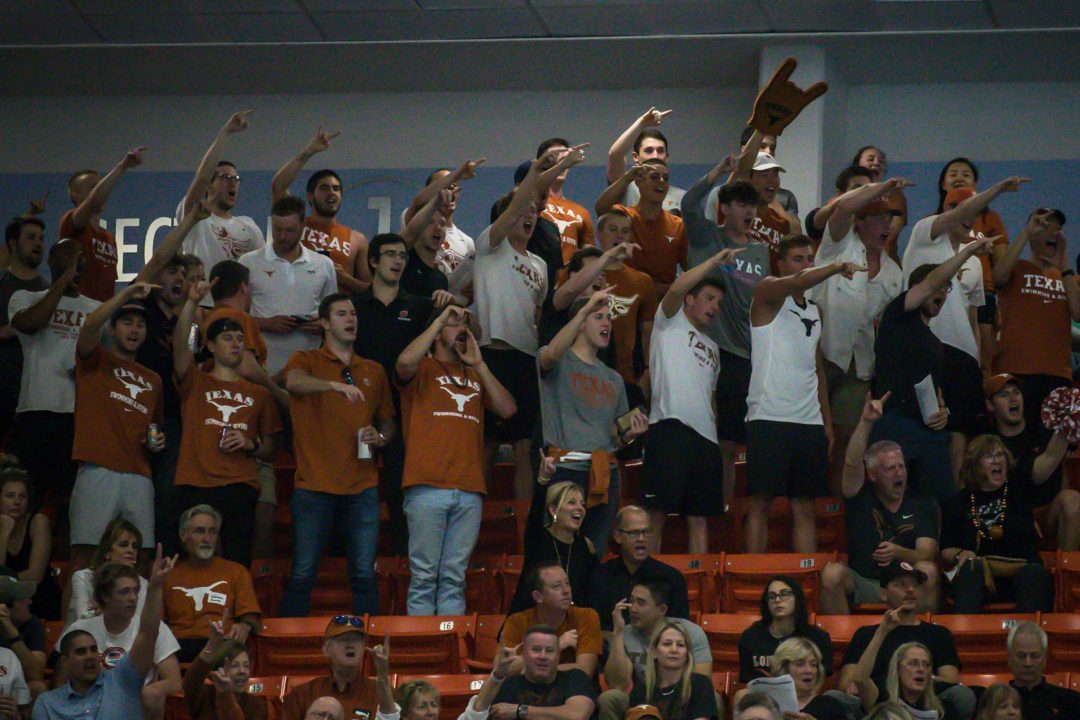 The Longhorn quartet combined for a 6:07.34, the 7th-fastest time ever, as well as the fastest time ever outside of NCAAs. Stock photo via Jack Spitser/Spitser Photography

Matti Mattsson highlighted day one Helsinki finals with a new Finnish national record in the 200 breast at 2:08.51, now No. 15 all-time in European history.

Quintin McCarty Swims a 43.97 on Day One of St. George Sectional

McCarty dipped below 44.0 for the first time in the 100 free while Max Cannon broke 2:00 in the 200 breast on day one of the St. George Sectionals.

Swedish Olympian Michelle Coleman says that she’s pleased with her consistency of results of late, but is ready to taper and pick up her final speed.

Australia Pulls Out of Diving World Cup; Confident in Vaccinations Before Games

Diving Australia has pulled out of the last Olympic diving qualifying event, but have expressed confidence in Australia’s ability to vaccinate athletes before the Olympic Games.

McSharry is now just four tenths of a second from the Olympic qualifying time in the event following her swim of 2:25.92.

British Swimming CEO Jack Buckner drops in on the SwimSwam Pod. Buckner leads Team U.K. into the Olympics with a long list of stars like Adam Peaty.

A few years ago, it seemed like we were getting used to the Texas men swimming pretty slow in-season. Sure, they’d rest a bit for the mid-season invite, but we generally didn’t see anything too eye-popping until NCAAs.

Well, one of Eddie Reese’s constant refrains is that he’s always learning and always changing things, and in the last two seasons we’ve seen the Longhorns throw down some pretty speedy times earlier in the season. That trend continued tonight at the Texas Hall of Fame Invite, as the Texas 800 free relay ‘A’ team combined for a time of 6:07.34. Not only is that the 7th-fastest mark all-time, it’s now the fastest time ever outside of NCAAs, eclipsing the 6:08.40 the Texas men put up last year at the Minnesota Invite.

What might even be more impressive than the time itself is the fact that tonight’s team only featured one man who was on that 6:08 team from last year — junior Drew Kibler.

Kibler led off tonight in 1:30.57, his fastest time ever, with his previous best time of 1:30.83 coming from the aforementioned Minnesota Invite last year. That time was in the individual 200 free two days after the 800 free relay, where he had anchored in 1:31.01.

The other three Texas men tonight all split 1:32s. Freshman Coby Carrozza split 1:32.32 on the 2nd leg, which bodes well for a big time drop for him in the individual event on Friday. His lifetime coming into this meet is a 1:34.37 from last December.

After missing essentially all of last season, Jake Sannem returned to action tonight with a 1:32.24 split on the 3rd leg. While Sannem didn’t crack this Longhorn relay as a sophomore after transferring from USC, he proved invaluable on the most of the rest of the Texas relays at 2019 NCAAs, splitting sub-19 and sub-42, and finishing 12th in the individual 200 free with a time of 1:32.56. His prelims time of 1:32.43 from that meet is his lifetime best, and that suggests he has a 1:31 relay split in him at some point.

Another freshman, Carson Foster, anchored the Longhorns’ relay tonight with a 1:32.21. That’s pretty well in step with his best 200 free time of 1:32.99, which he did coming up on two years ago. However, considering that Foster threw down a 3:35 4o0 IM back in October, making him the 2nd-fastest man ever in this event, he presumably shouldn’t be too tapered this week, as he was of course easily under the NCAA ‘A’ cut in that event. That same thought holds true for Kibler, who already has ‘A’ cuts in the 200 and 500 freestyles from earlier this season.

Going back to the other three swimmers on that 6:08 relay from last year’s Minnesota Invite, two of the absences are noticeable. Maxime Rooney’s is not, as he graduated. But the other two legs last year were Matthew Willenbring and Austin Katz. We haven’t seen Willenbring swim yet at all this season, and we haven’t seen too much of Katz either. Katz has been a stalwart for this relay at NCAAs, anchoring 1:32.2 as a freshman in 2018, and splitting 1:31.4 on the second leg in 2019, when he teamed up with Kibler, Jeff Newkirk, and Townley Haas to set the US Open record at 6:05.08. So, it’ll definitely be interesting to see if Katz swims this week, and if so, how he does in his signature events, the backstrokes.

Every single NCAA event (except the 200 free relay) has gotten markedly faster over the last few years, and this event in particular has gotten wicked fast ever since it was moved from the final event of day two at NCAAs to the only event of day one. Prior to that change, the fastest time ever was a 6:09.85, done by Michigan at the 2014 B1G Championships. That time now ranks 19th ever.

How much does all this matter? Maybe not all that much. Coaches  don’t always take this event super-seriously at this point in the year; UVA hasn’t even bothered swimming it at their mid-season invite recently, opting to wait to get their cuts at ACCs. And sure, Texas being fast in the 200 free isn’t anything new — that’s been the case for the better part of four decades. But what is fun is that no matter how much we get our minds blown by fast swimming (remember seeing Texas go 6:08 in 2016?), it continues to get faster, and fast swimming is fun to watch, no matter the time of year.

Do not cite the deep magic to me, witch. I was there when it was written.