Willenbring & Bergman Named A10 Men’s Co-Performers Of The Week 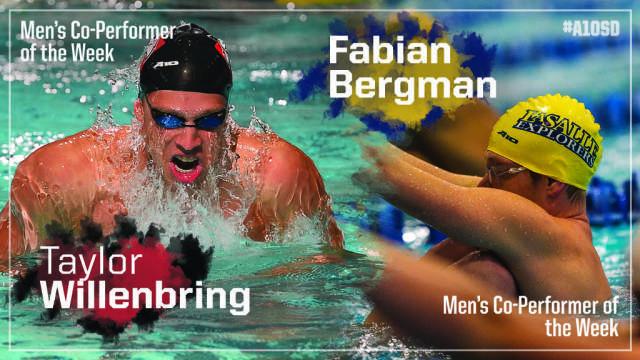 Willenbring had a successful day at Davidson’s dual meet versus back-to-back CAA Champions William & Mary Saturday. The junior posted a first and a second-place finish, as well as a second and third-place finish in two relays. The Fort Worth, Texas native took the top prize in the men’s 100 breaststroke, where he ranks seventh in the league, turning in a clip of 58.53. Willenbring nearly went unblemished in the individual events, as he was a mere half-stroke behind in the 100 freestyle, coming in second by just three-tenths with a time of 46.93. He also ranks seventh in that event in the A-10. Willenbring swam the breaststroke portion of the 200 medley relay, where the quartet came in third behind William & Mary. He finished his day with a second-place in the 400 freestyle relay. Willenbring holds the top times at Davidson in three events this season, and holds three rankings on the school’s All-Time Performances list, including second in the 100 breaststroke.

Bergman, a native from Stockholm, Sweden, took home four first-place finishes in a home meet against Fordham last weekend. Bergman won the 100 backstroke (50.32 seconds) by over two seconds ahead of second place and won the 200 backstroke (1:51.10) by over three seconds ahead of second place. He also helped his team take home first place finishes in the 200 medley relay and 400 free relay.

Lankiewicz, the two-time A-10 Performer of the Year, once again had a standout day in the pool for the Wildcats on Senior Day as Davidson faced the Colonial Athletic Association power William & Mary. The senior turned in three firsts and a second, taking the top spot in the 1,000 and 500 freestyle events and served as a member of the 400 freestyle relay. She was narrowly edged out in the 100 freestyle, being out-touched by just a tenth of a second. Lankiewicz, who ranks first in the league in the 1,000, turned in a time of 10:11.41, finishing more than ten seconds ahead of the next best competitor. The native from Wilmington, Del., followed that up with a win in the 500 freestyle, where she also boasts a league-best mark, clocking in on Saturday at 5:00.56, better than the second-place finisher by over nine seconds. She finished the day swimming the third leg of the 400 freestyle relay, where she was joined by two classmates and a sophomore to turn in a clip of 3:32.69, over five seconds ahead of the rest of the field. Her second-place finish came via a thrilling race in the 100 freestyle, where she was merely a touch behind the winner, as she clocked in at 51.43. The senior owns the second-best mark in the league in the event this year.

Fath continued the stellar start to his career with two individual wins on Saturday at ODU to help the Colonials wrap the regular season with a victory. The freshman from Haslach, Germany, touched the wall first in the 200-yard freestyle in 1:41.34 before winning the 500 free in 4:41.83. The rookie also helped GW take second in the 400 free relay (3:05.77).

Over the weekend, Marsh won two races against Atlantic 10 foes, La Salle and Fordham. She won the 200 free with a time of 1:51.96, four seconds ahead of second-place finisher and teammate, Annie Lane. In the 50 free, she narrowly out-touched Fordham’s Tara Brunner with a time of 24.65 to win the event. On Friday against Villanova, the freshman from High Point, N.C., notched two top-three performances in the 100 free (52.23) and 500 free (5:05.50).