Why Propulsion Forces in Swimming Matter: The Dolphin Kick 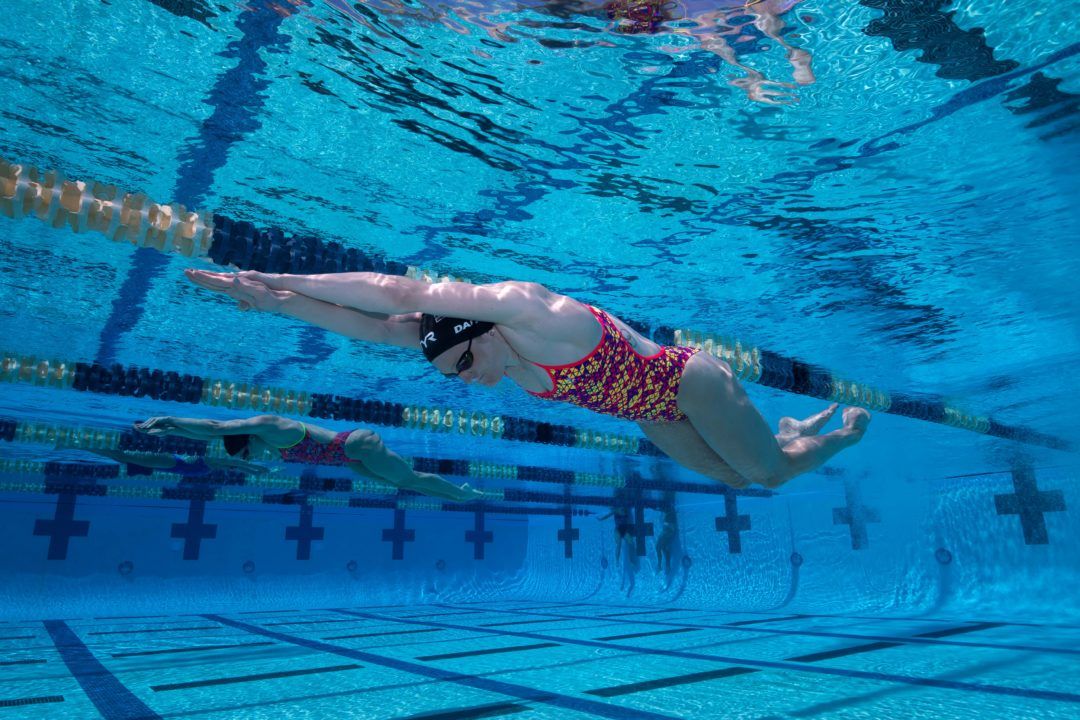 Gary Hall Sr., 10-time World Record Holder, 3-time Olympian: "I continue to learn more about this fascinating motion in the water and what makes it work well….or not so well for swimmers." Current photo via Mike Lewis/Ola Vista Photography

In addition to the recently established Swimming Rewards Program, BSN SPORTS has also made improvements to their online team shops.

This week’s set of the week, which has an even rougher start than Ryan Reynolds’ superhero movie career, comes from Ethan Beseris, Team Sales Rep for FINIS.

I continue to learn more about this fascinating motion in the water and what makes it work well….or not so well for swimmers. Like all other swimming techniques, fast dolphin kick requires certain tools in order to do well. The three most notable tools for dolphin kick are extreme plantar ankle flexibility, leg and lower back strength for knee and hip extension, and incredible leg fitness to sustain a motion that has no significant rest or recovery phase.

Beyond having the tools, however, I have learned by studying some of the fastest dolphin kickers in the world, like Kelsi Worrell, that there are nuances to the dolphin kick motion that can make it work better. Although few athletes use all of them, there are actually four different points during the dolphin kicking cycle that an athlete can potentially accelerate. That means that the propulsion forces are greater than the frontal drag forces.

Using the Vortex
The first and often the most powerful point of acceleration is at the beginning of the down kick. The down kick is biomechanically stronger than the up kick, so a lot of propulsion can be achieved here. The second point of potential acceleration is when the foot passes through the slipstream or vortex of the swimmer’s body (located directly behind the swimmer) on the way down. The third point of acceleration can occur at the beginning of the up kick, and the fourth as the foot passes through the slipstream on the way back up.

The majority of swimmers do not get acceleration at all four of these points, but Kelsi does. That effectively keeps her speed more constant, which according to the law of inertia, makes her more efficient. Many dolphin kickers will get acceleration only from the strong down kick, which leads to large variations in speed and greater inefficiency.

Reduce your deceleration
There are also two important points during the kicking cycle when the swimmers will decelerate (drag is greater than propulsion). How much they decelerate depends very much on the technique that is being used. The first, and often most harmful, is when the legs are drawn forward and knees bend in preparation for the down kick. The speed at which the legs are drawn forward and the degree that the knee bends have a huge impact on the amount of deceleration that will occur.

The second point of deceleration occurs during the down kick, after the feet pass through the body’s vortex. The amount of deceleration here depends greatly on how long and how much the feet are left hanging before the next up kick is taken and how much flexion occurs at the hip. Deceleration is always followed by a loss of speed. The further the speed drops, the harder it becomes to get it back up again.

Practice these motions
In order to maximize the acceleration and top speed and minimize the deceleration and loss of speed, here is what needs to happen. The feet must be pigeon-toed and snapped down hard at the beginning of the down kick and drawn up aggressively at the beginning of the up kick. Then the feet and legs must push hard through the vortex and abruptly slow down and reverse directions once they pass the vortex. That is a tall order. It is like telling someone to floor it on the gas pedal and to slam on the brakes a second later over and over again.

The challenge in achieving this motion occurs when a swimmer doesn’t have enough plantar flexibility in the ankles. Then, in order to get more propulsion on the down kick, the feet have to be drawn further forward, knees bending more than 60 degrees. That means the legs have to be drawn forward more aggressively in order to get the down kick in time…and more deceleration occurs. You can see now why the ankle flexibility is the key to the entire dolphin kick working.

Start to improve your dolphin kick by working on your plantar ankle flexibility. Without that, we have a serious problem. Then work hard. not only at the beginning of the down kick, but during the start of up kick, too. Continue the speed of the feet through the vortex, but once they pass the horizontal position, think about reversing directions as soon and as forcefully as you can. Do all this and who knows, you may become the next Kelsi Worrell. At the very least, you will dolphin kick faster.

This week in Lanes 2, 3 and 4, you will find one of the most interesting webisodes we have ever produced. In it you will see how Kelsi Worrell and Luca Spinazolla, two very fast dolphin kickers, take advantage of the two important vortices to generate great propulsion.=

What about a swimmer who when they are in the streamline position has very poor flexibility in the back and can therefore only generate a small range of motion with the legs.