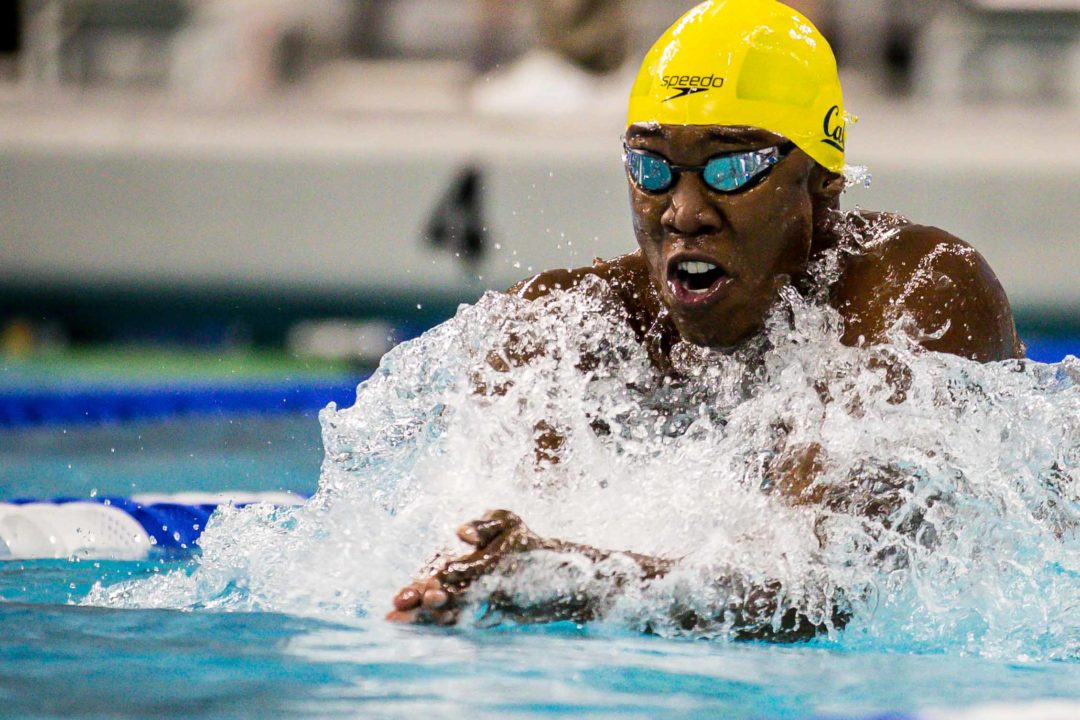 Reece Whitley was one of three Cal Bears to sweep their respective discipline in a dominant showing over Stanford at the annual Triple Distance meet. Current photo via Jack Spitser/Spitser Photography

On Friday evening in Berkeley, the California Golden Bears and the Stanford Cardinal squared off in their annual “triple distance” meet. In this event, athletes are divided into 6 different groups, based on stroke specialty, with each one swimming three different distances of that specialty: butterfly, backstroke, breaststroke, sprint freestyle (50/100/200), distance freestyle (200/500/1000), and IM (100/200/400).

It’s been a relatively quiet season so far for the Bears, who’ve only had the “King of the Pool” meet and a dual against Pacific, but once again, Cal dominated this event, winning five of the six disciplines and both relays, putting up some nation-leading times in the process and responding to a Texas team that’s been swimming fast early in the year.

Cal’s got big performances from Reece Whitley and Zheng Quah, who each swept their disciplines for the second year in a row with times that vaulted them to the top of the season rankings.

Carr, Whitley, Pawel Sendyk, Nate Biondi combined to win the 200 medley relay in 1:27.02, while Hoffer, Jensen, Quah, and Mefford went 1:19.70 in the 200 free relay. Those times rank 7th and and 4th in the nation so far this season, pending, as always, on other results from this weekend. Sendyk split 20.42 on the fly leg of the medley relay, while Jensen’s 19.55 split on the 200 free relay was the fastest in the field.

Outside of Shoults, Stanford also got a strong performance from Alberto Mestre, who placed 3rd in both the 50 and 100 freestyles with times of 20.08/44.72. Mestre didn’t swim for Stanford last year, and his return should help buoy the sprint free relays. Stanford’s 200 free relay made the B-final at last year’s NCAAs, but featured all seniors, and the 400 free relay relay did not score. Another swim Stanford missed at the end of last year, Jack LeVant, did compete yesterday, finishing last in each of the fly events.

BERKELEY – California continued its steady progress through the fall season as the Bears earned five overall wins and swept a pair of relays against Stanford in the annual Triple Distance Meet at Spieker Aquatics Complex on Friday afternoon.

A unique meet that tests both teams’ depth, the Triple Distance Meet features three distances – 50, 100 and 200 yards – of each stroke, as well as a 200 medley relay and 200 free relay. Three Bears – Zheng Wen Quah, Bryce Mefford and Reece Whitley – won all three of their respective events to highlight the afternoon.

Michael Jensen edged Stanford’s Alberto Mestre and Mason Gonzalez and teammate Ryan Hoffer for the overall freestyle victory thanks to an impressive showing in the 200 free event. The senior swam the 200 free in 1:37.77 to come from behind and beat out the Stanford duo and Hoffer, the latter of which entered the final event as the leader with wins in the 50 (19.57) and 100 (43.88).

Cal closed out the day with wins in both relay events. Carr, Whitley, Pawel Sendyk and Nate Biondi won the 200 medley relay in 1:27.02, besting Stanford by 1.43 seconds. The quartet of Hoffer, Jensen, Quah and Mefford then wrapped up the afternoon with a winning time of 1:19.70 in the 200 free relay.

COACH DURDEN’S TAKE
“Today was a strong performance overall, it was good to race against someone other than ourselves,” said head coach David Durden. “We’ve gone through a long stretch with our focus being on training, so getting up and racing probably felt a bit uncomfortable for our guys. It was good for them to experience that today.

“Because we didn’t go into this meet with quantitative expectations, one of the challenges we tried to work through was the pace of the meet. Our goal was to have good communication amongst our group to understand how everyone was performing throughout the meet.”

NEXT TIME
The Bears will shift their focus to their final competition of the 2019 calendar year, the Minnesota Invitational, on Dec. 4-7 in Minneapolis. Cal’s swimmers and divers will both compete in the four-day meet.

It was the Cardinal’s penultimate competition of the fall, an annual unscored meet against California featuring the two longtime rivals. Shoults (9:05.69) earned Stanford’s lone win of the day in the 1,000 free.

Stanford wraps up its fall action in two weeks when it competes in the Art Adamson Invitational in College Station, Texas.

Good to see both teams in action, and very nice to see Levant and Shoults swimming again. Many Stanford swimmers not swimming yesterday, especially several freshman, plus Liang and Murphy. Any info why?

Cal times look very strong, especially Quah and Whitley, among others. Very solid swims across the board.

Indelible image of Whitley will always be his expression when Durden ass-planted at NCAAs at the end of the 100 back do-over.