Where Are the Swim Spectators? 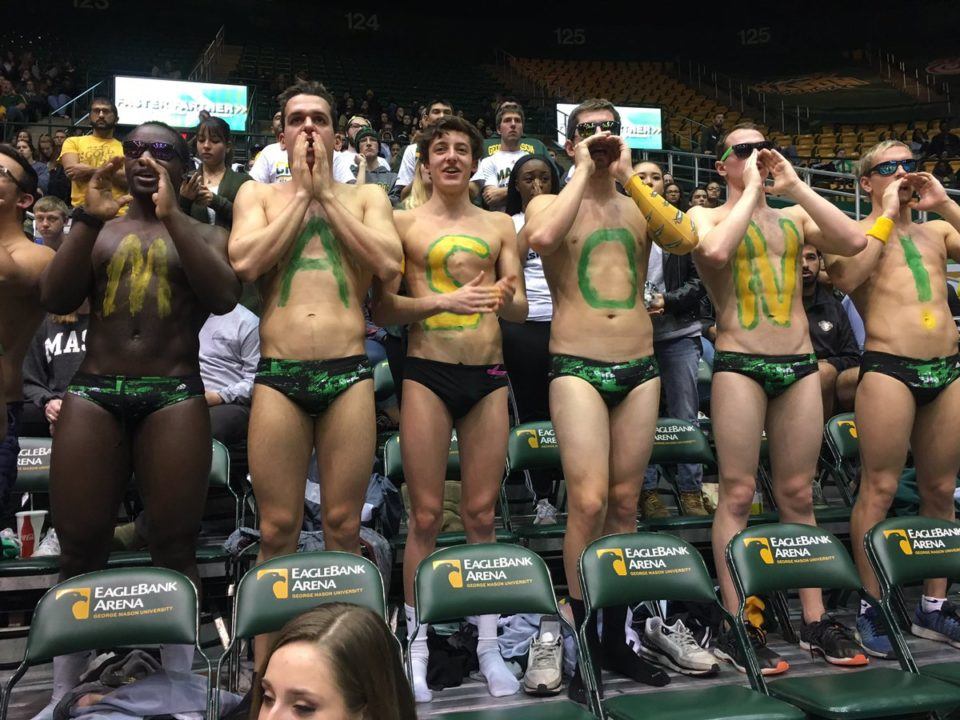 Do other conferences lack swim fans from the general public, too? Current photo via @ByGeorgeGMU and @MasonSwimDive on Twitter

I’m a swim fan. I enjoy swim meets. I like to cheer for our local high school, club team, and of course college swimmers, too. We stop by meets when we don’t have children swimming and love to watch races.

This isn’t unusual in other sports at all—like football, gymnastics or even golf. There are spectators galore. In swimming, however, it seems like most of the people in the stands are relatives of the swimmers. There are only a handful of people who attend meets as fans from the public. Last week, I went to PAC 12s to cheer on my friends’ kids. Besides a group of Cal former swimmers who attend PAC 12s together every year, there are only a handful of swim fans without direct connections to the athletes. Do other conferences lack swim fans from the general public, too?

With the news that Oregon State cancelled their swim program and other collegiate swim teams being cut recently, I think the promotion of our sport should be a concern. What can we do as swim parents, officials, administrators, coaches and swimmers to help swimming thrive?

How do we get more people interested in watching swim meets? Here are a few ideas to increase the fan base:

Support local teams. Attend local meets and cheer for the swimmers. Take non-swimming friends along so they can experience the excitement, too. Of course, you’ll have to explain what’s going on because non-swimmers may not understand how many laps are in a 500 or what an IM is.

More publicity for meets. At the women’s PAC 12s, the people living in Federal Way were not aware that they had Olympians and a number of the world’s greatest swimmers in their town. Most of the community didn’t know there was a swim meet going on at all or that it was open to the public for a small fee. Promoting a meet to the public may spark some interest and get people to watch.

Welcome the fans. I’ve been to several meets where a swim parent asks “Why are you even here?” It made me feel weird like I shouldn’t want to be watching the sport. No one said that to me at a football game. Not ever.

Reach out to alumni. There’s an entire audience of former swimmers and swim parents out there who could be motivated to watch swimming. By promoting events for alumni groups we may see more people in the stands, supporting our teams.

More access to viewing. We have to search near and far to find broadcasts of swimming outside of the Olympic years, where swimming tops other Olympic sports for viewers. I believe with more broadcasts and live streaming, we’d gain more swim fans. Then the big question is, how do we get more live coverage and broadcasts?

What ideas do you have to increase interest in swimming?

It’s hard to get “civilians” involved in something that the majority of parents, swimmers, and coaches complain about having to do themselves. Hence #3

SEC’s are sold out – the crowd is electric. Take a close look at what makes that special.

The SEC did a great job!! I’ve watched lots of conference meets, and the most glaring fault was announcers who have no clue. Big 10 Women’s was especially bad. Watch SEC and learn.

SEC does do a great job but it’s comparing apples to oranges…you have twice as many teams because it is a combined meet. 22 teams at SECs (10 men, 12 women) vs 6 teams at men’s pac12. Maybe start combining conference meets?

Bingo! Combine the meets and you fill the stands!

I feel your pain. I too have been asked many a time, “Why are you here?” …because I’ve always liked to cheer for the team, the friends, and the social aspect of seeing other swim parents, whom I may not see otherwise. Not really that hard to understand and yet it’s such a mystery to those that are sitting in the stands. I’ve even had one tell me that if their kid wasn’t there, they would definitely not be there. But then, how are the meets able to run? If not cheering, then you volunteer. Simple as that.

We just finished three out of four weekends at our girl’s HS league, HS state and club state. Boys HS started up last week and duel meet season starts tonight and an invite this weekend. And you are suggesting that we spend a free weekend day inside a crowded hot chlorine filled natatorium to watch kids/young adults we don’t know swim back and forth? Bwahahahahaha. No thank you.

No, she’s actually not suggesting that.

Here are my thoughts:

Most college coaches/programs can do a MUCH better job at reaching out to their local swim communities. I’ve seen numerous college coaches flat out ignore swimmers in their own backyard and then complain about lack of community support. It is a two way street. I understand it can be exhausting trying to run a college program and try to appease fans, the AD, etc. I also understand that when on the recruiting trail you’ve got to try and get the best swimmers from anywhere, but my suggestion is that IF college programs want local support- they need to play a much bigger role within their LSC’s. I’m not saying recruit every Tom, Dick and Harry out… Read more »

I have been to many college swim dual meets where there is no running score showing on the scoreboards. Would you go to a college basketball game when the score is not kept current?

Marketing/promotion and self-support are the two biggest factors I see in helping to grow attendance at championship meets.

Coaches/Swimmers need to do a better job of building relationships with the local media in order to help promote the sport. Recent examples of lack of coverage:
1) Indiana Men’s swimming and diving just won their third straight Big Ten title. The Bloomington paper buried the story on page 5 of the sports section. Of concern here is that American Record-holder Ian Finnerty is a Bloomington native, yet still the story was buried on page 5.
2) When Indianapolis hosted the World Junior Championships in 2017, there was ZERO coverage on the Indianapolis television stations and little to no… Read more »

Two areas that need to be better addressed:
1) Promotion and publicity
2) the “Fan Experience” (as those marketing pro teams refer to it)

In area 1, it encompasses both better reach-out to the media – and direct promotion to the potential audience.
When meets are planned, does the meet organizing group include a person tasked with the role of being the media representative? Someone needs to fill that role, and they need to develop- a list of potentially interested media organization contacts, then supply them with a press release, information packet (which should have info about the meet, but also info about the sport, the rules, background info about relevant records, past stars,. etc – give… Read more »

Fan experience needs to be a priority for the sport. How can you grow a pro league with no one in the stands and no way to otherwise consume the sport? Also, how do you grow the sport at the young level if parents aren’t willing to sit in the stands? Even where there is demand (eg NCAAs) there’s no tickets available, so there’s limited means to introduce new people to the most exciting crowd experiences.

Online streaming is getting better, but the bar was pretty low to begin with… swim meets are/can be fun! And not just for the athletes and coaches.