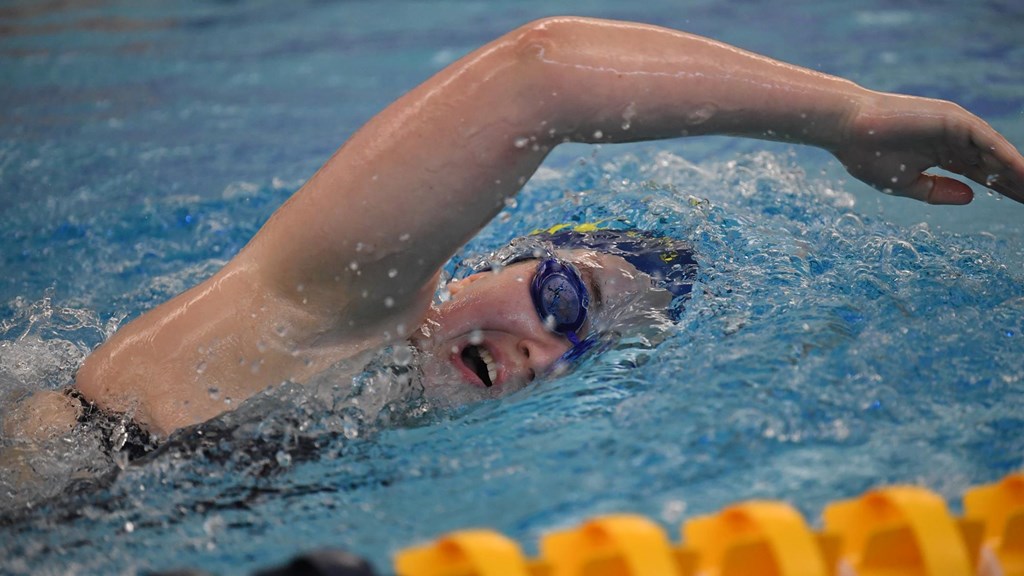 The women's team topped the Horned Frogs, 165-88, while the men claimed the victory with a final score of 176-65. Current photo via WVU Athletics

MORGANTOWN, W.Va. – The West Virginia University men’s and women’s swimming and diving teams collected a pair of conference wins over TCU on Saturday afternoon, at the University Recreation Center in Fort Worth, Texas.

In all, the Mountaineers collected 18 total victories, including all six relay races, in their first Big 12 meet of the season. The women’s team topped the Horned Frogs, 165-88, while the men claimed the victory with a final score of 176-65.

­­­West Virginia’s star freshman duo of Emily Haimes and Hunter Armstrong paced their respective teams, earning seven total wins among them, including two individual victories apiece. Armstrong’s individual wins came in the 50 freestyle and 100 backstroke, while Haimes picked up victories in the 50 and 100 free.

“We had a very impressive meet today for both teams,” Mountaineer coach Vic Riggs said. “Our relays were strong and paced us all day. I thought that the men and women both competed very well as a team today.”

The meet opened with a pair of victories in the 200-yard medley relays. Senior Ally VanNetta, freshman Mathilde Kaelbel and seniors Morgan Bullock and Julia Nilton secured the win in 1:46.80 for the women, while Armstrong, sophomore Fausto Huerta and juniors David Dixon and Ryen Van Wyk finished first for the men (1:30.97).

In the diving well, West Virginia’s divers excelled, as both teams swept the 1- and 3-meter springboard cometitions. On 1-meter, redshirt senior Austin Smith secured his first victory of the season, taking first place with a score of 296.775. Sophomore Nick Cover took second place (289.5), while sophomore PJ Lenz grabbed third (276.9). Cover took the top spot on 3-meter, with a mark of 313.05. He was followed by Lenz in second place (308.7) and Smith in third (305.325).

“Today was a good day for the divers,” diving coach Michael Grapner said. “The team’s energy was exciting, which helped them perform. Holly was very consistent on both boards and definitely had fun today. Before the meet, I talked to the divers about remembering why diving us fun and to go out and simply have fun.”

Back in the competition pool, freshman Harna Minezawa collected her first victory of her freshman campaign in the 100 butterfly with a time of 58.67, while Dixon did the same for the men in 47.82. In the 100-yard freestyle, Haimes earned her first win of the day after touching the wall in 52.02. Van Wyk finished second (46.75) in the men’s race.

Gursoy placed second in the 500 free in 5:10.51, while Saladin tallied his second win of the contest in 4:42.36 for the men. In the second relay of the day, the 200 free, the women and men secured two more victories. Haimes, Nilton, Bliss and Gursoy took the win for the women (1:36.50), and Van Wyk, junior Christopher O’Shea and seniors Jack Frazier and Sam Neaveill finished in 1:24.99 for the men.

VanNetta picked up her first individual win of the day in the 100 backstroke after touching the wall in 56.72, while Armstrong grabbed another win in the men’s event in 49.52. Then, the Mountaineers grabbed two more wins in the 100 breaststroke events from Kaelbel in the women’s race (1:08.38) and Huerta in the men’s (56.91).

In the final swims of the day, the 400 free relays, WVU ended the meet the way it started with two relay victories. Haimes, Bullock, Gursoy and Bliss combined to finish first in 3:31.81, followed by a win from Armstrong, Dixon, O’Shea and Gustafson in 3:06.29 in the men’s race.

The Mountaineer men collected their second win in two days on Saturday after they topped SMU Friday night, 182-117. With today’s victory, the squad moves to 3-1 in dual meets and 1-0 in the Big 12. The women picked up their first dual meet win of the season to move to 1-2 on the year and 1-0 in Big 12 meets.

The Mountaineers now return to Morgantown for the remainder of the regular season. Up first is a Big 12 dual meet for the women against Iowa State on Saturday, Jan. 25. Action at the Aquatic Center at Mylan Park is scheduled to begin at 11 a.m. ET.

FORT WORTH — TCU’s swimming and diving teams came up short against West Virginia Saturday afternoon at the TCU Rec. The men lost, 176-65, while the women fell, 165-88.

Two’s Better Than One

Going Out On Top

Senior Claire Munster won her final individual race at the TCU Rec. The team captain finished first in the 50 free (23.99).