Weinberger fights back from mistake, settles for 5th 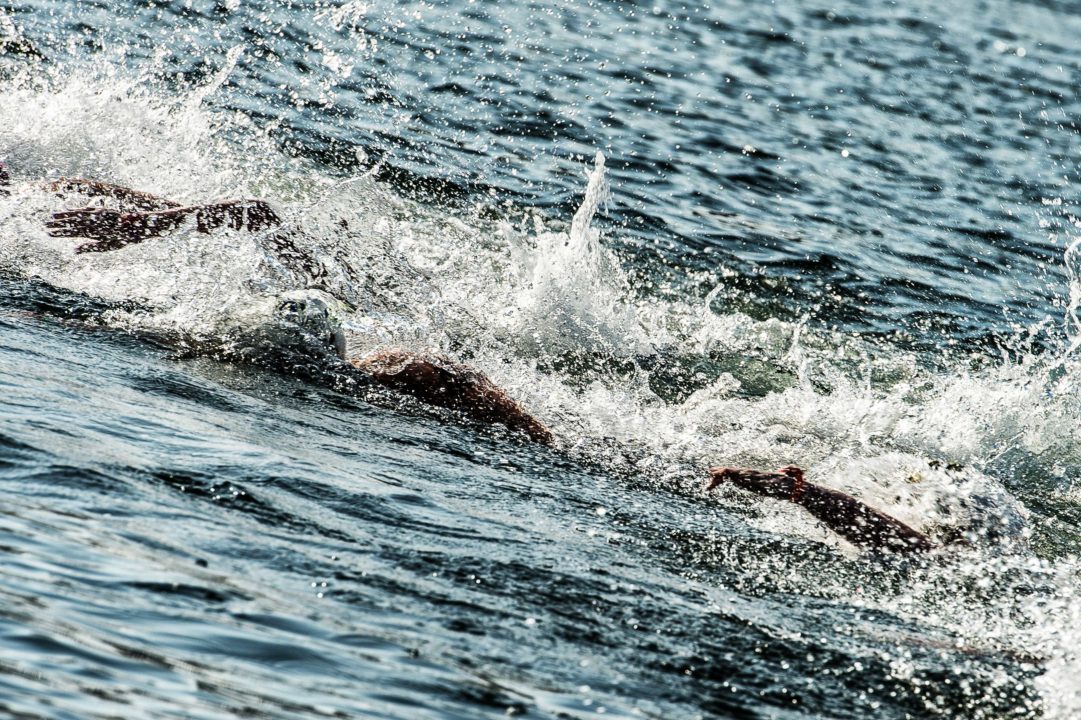 “I’m one of the strongest guys out there and I know I could have come first. It’s just so disappointing that I made such an amateur mistake and I didn’t notice the turning buoy pass on my right,” Weinberger said after the race. “I know I’m better than that.” (Photo Credit: Mike Lewis, olavistaphotography.com)

BARCELONA – Despite making what he called a “fatal mistake,” Richard Weinberger was less than a second away from a medal in the men’s 10-kilometre open water swimming marathon at FINA World Championships in Barcelona.

The 23-year-old Weinberger had to settle for fifth with a time of 1:49:19.9, just 0.7 seconds behind bronze medallist Oussama Mellouli of Tunisia. Spyridon Gianniotis of Greece was the winner in a time of 1:49:11.8, while Germany’s Thomas Lurz took silver in 1:49:14.5

Weinberger missed a turning buoy midway through the race at Moll de la Fusta and was forced to leave his position near the front of the pack to repeat the turn.

“I’m one of the strongest guys out there and I know I could have come first. It’s just so disappointing that I made such an amateur mistake and I didn’t notice the turning buoy pass on my right,” Weinberger said after the race. “I know I’m better than that.”

The Victoria native, who won a bronze medal in the event at the 2012 Olympics, didn’t just play catch-up. He battled all the way back to the front as the competitors entered the final lap, winning over the crowd with his impressive comeback.

“I’m pretty proud of the fact that I didn’t give up,” Weinberger said. “I tried to stay cool but I knew it was a fatal mistake and I paid for it.”

After expending the extra energy fighting his way through the pack of bodies, Weinberger found himself in a three-way battle for third as Gianniotis and Lurz charged ahead. Mellouli out-touched him for the bronze and Damien Cattin-Vidal of France took fourth by just 0.1 second.

“We’re disappointed he made a mistake around a buoy and had to make that up. That obviously cost him a little bit more energy than he wanted to put in. He still fought really hard,” said Weinberger’s coach, Ron Jacks. “It shows a lot of character. It shows that he doesn’t give up and I think that shows a lot of substance as a person for Richard.”

Meanwhile, fellow Victorian Eric Hedlin finished 23rd in the 66-swimmer field in a time of 1:49:54.5 just two days after winning a silver medal in the 5-km.

“I didn’t exactly get the position I wanted but it’s not that I’m disappointed,” said the 20-year-old world championships rookie. “From a perfect race you don’t really learn very much so I guess I learned quite a bit during that one, mainly things involving pacing.”

Hedlin admitted he was dealing with fatigue from the quick turnaround after the 5-km. He turns his focus next to the 5-km team event on Thursday, while Weinberger has until Saturday to regroup for the 25-km marathon.

“At least I know that my swimming is not the issue,” Weinberger said. “I know I’m one of the fastest and fittest guys out there. I know that and they’re going to feel it in the 25-km.”

“We have world-class athletes who showed their mental toughness today. The way that Eric got back in after the 5-km and was competitive in the 10, it’s a learning experience for him,” Atkinson said. “Richard Weinberger, obviously there was an error in the race, but the quality of the athlete is that he could get back on terms and be there in the finish with the top athletes in the world. He’s world-class and showed that today and he’ll bounce back for the 25-km.”

This unedited press release was provided to swimswam by Swimming Canada.