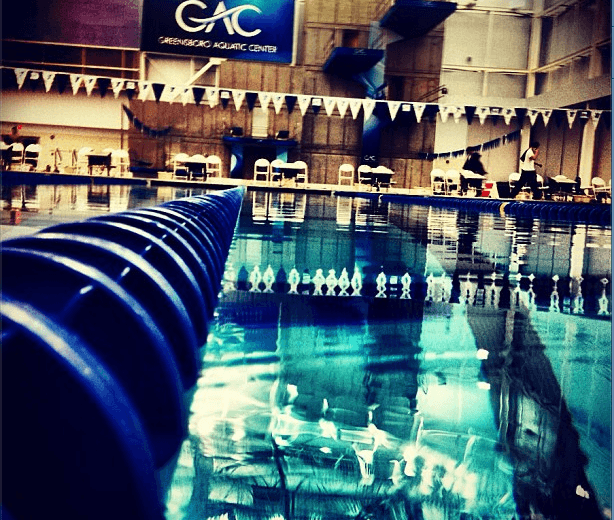 After a record-setting first day at the 2013 YMCA Short Course National Championships, the pool in Greensboro, North Carolina was abuzz for day 2.

One record went down on Wednesday morning, and it was in the last individual race of the session. There, Flint, Michigan 17-year old Courtney Weaver took the top seed in the 100 fly with a 53.22. That broke her own record from last year of 53.26 as she tries to win her second-straight National Championship in this event.

She should get a little bit better of a push than last year, where she swam mostly alone; the second-seed is Maddie Zimmerman in 54.60, Niki Price is 3rd in 54.61, and Jessi Snover is 4th in 54.62. In fact, 6 girls were better than 55 seconds in this year’s prelims, whereas last year Weave was alone in that.

In the women’s 200 free prelims, we saw top seeds from two swimmers having big break through years. The top seed belonged to Adriana Grabski from the Sunbury Branch YMCA in Pennsylvania in 1:47.49. She is the defending Pennsylvania AA State Champion and record holder, but prior to that  meet in early March, her best times were in the 1:51 range. She was only 17th in this same meet last season.

In the 400 IM, Florida commit Danielle Valley took the top seed in a 4:15.18. She’s a great distance freestyler, and headed toward her college career this race now becomes a viable third-event option; that’s a best time by four seconds.

The second seed in this race was another young swimmer from the York YMCA. 13-year old Courtney Harnish swam a 4:19.27.

The men’s 400 IM final has a three-headed lead, with Max Dolan, Brandon Flynn, and Ian Rainey all touching within a tenth of each other in prelims with 3:55-mids.

Nate Carr is the next guy outside of the group in 3:57.29, but he was the top seed coming into the race.

And finally, the men’s 100 fly is led by Michael Skibnie in 48.87: his first time going under 50 seconds in this event. Fellow New Jerseyan Sam Lynch took the 2nd seed in 49.11, and Nick Petersen from the Schroeder Y is the 3rd seed. Lynch and Petersen took 2nd and 3rd in the 100 back on Wednesday evening.