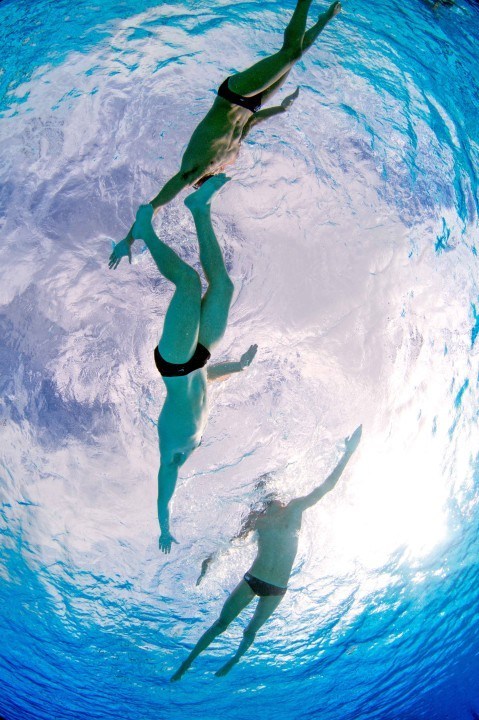 Newport Beach, CA – April 4 – The USA Men’s National Team lost a heartbreaker, 17-16, in a shootout to Australia last night in the semifinals of the FINA Men’s Intercontinental Tournament. Team USA will meet China today atnoon for the bronze medal while Australia will take on Brazil for gold at1:30pm. Complete tournament information and live streaming is available byclicking here. See below for full semifinal round recaps.

Day 5 at the FINA Men’s Intercontinental Tournament in Newport Beach, California, was riveting, tension-filled – perhaps even ulcer-inducing – because three of the four games (including both semifinals) were tied late in the fourth quarter.

One went to a shootout. (Australia beat the US, 17-16, on the final save to advance to the championship game.)  Another came down to the last second. (Japan beat Canada, 11-10, when Keigo Okawa whipped in a time-expiring goal that rendered the Canadian coach speechless and his players distraught.) And another saw a rookie mistake lead to a game-winning penalty shot in the final 1:10 (as Brazil beat China 14-12 to advance to Saturday’s final).

The only lopsided match was Kazakhstan’s 19-8 victory over Argentina.

The tournament concludes Saturday as Argentina faces Canada to determine 7th/8th place,  Kazakhstan plays Japan for 5th/6th,  USA clashes with China for the bronze, and Australia battles Brazil for the gold.

All four teams in the medal matches have automatically earned berths in the FINA World League Super Final in Bergamo, Italy, from June 23-28.

In the only drubbing of the day, Kazakhstan beat Argentina after blazing to a 6-3 start in a first quarter fraught with blatant grappling. In the second quarter, Kazakhstan racked up five more goals; Sergey Gubarev delivered three and Rustam Ukumanov contributed two – giving each player four goals in the first half and extending Kazakhstan’s lead to 11-5 at halftime.

In the third quarter, Argentina’s German Yanez scored the opening and closing goals, but Kazakhstan netted five balls for a 16-7 advantage. In the fourth quarter, each team scored twice more. Notably, both of Kazakhstan’s points came from 19-year-old Yulian Verdesh who nailed the back of the net in the last second to punctuate a 19-8 victory that kept Argentina winless and advance Kazaskhstan to the classification match to determine fifth and sixth place where it will meet Japan on Saturday.

“This was a very important game for us because we are in the same group as Argentina in the world championships. Our group is: Argentina, Hungary, and South Africa. Best player today I think was No. 10, Yulian Verdesh. Today he scored three goals, played good in defense, and he’s young. I’m satisfied.”

When Canada and Japan met earlier in group play, Canada won, 20-10. Two days later, it was a different story.

Early on, Canada tried to control the game but Japan matched its intensity. In the first period, Canada pulled itself up to a 3-3 tie when Jared McElroy scored with 1:02 remaining. But Yusuke Shimizu scored off a quick cross-pass with one second left to give Japan a 4-3 lead at the end of the first period. By halftime it was tied at 6, and Canada’s six goals had come from six different players.

Midway through the third period, John Conway broke the tie and David Lapins added one to give Canada an 8-6 lead. Japan rallied back when Kenya Yasuda fired a long-distance bullet that caught Canada’s goalie Robin Randall off guard and suddenly it was a one-point game. Yuki Kadono scored in the final 42 seconds to end the third period tied, 8-8.  At 9-all in the fourth period, Japan’s aggressive goalie Katsuyuki Tanamura went out for his fifth steal of the game. With 3:17 to go, Keigo Okawa put Japan ahead, 10-9, with a hard skip shot. Canada’s Scott Robinson answered to tie it at 10 with 2:18 left in regulation. With one second to go, Okawa earned his fourth goal of the day – the game-winner for Japan, 11-10.

“Our concentration and goalkeeping [was better than the last time we played Canada]. This tournament – as well as this match – very important because this December we have the Asian qualification for the Olympics and we wanted this kind of high-level competition under our belts.”

David Lapins (CAN) – One goal

“Sorry, I’m just kind of pffffpfpfpf. Our main goal right now is to prepare ourselves for Pan Ams. We had a bit of bad luck and sometimes that’s just sport.”

After the first semifinal, Australia remained undefeated despite an improbable three-goal comeback by the US late in the fourth period that included Bret Bonanni’s game-tying goal with 14 seconds to go that forced a penalty shootout.

From the outset, it was clear how similar the teams were.  They tied and traded leads in the first period until 20-year-old Jackson Kimbell scored with 51 seconds left to give the US a 4-3 edge at the horn. In the second period, Janson Wigo and Alex Bowen put the US up 6-4. With 4:38 remaining, Johnno Cotterill converted a 5-metre penalty shot to narrow the gap, 6-5, and Lachlan Edwards tied it for Australia. Two subsequent power play goals – first by Stanford star Bret Bonanni of the US, and later by Aussie Rhys Howden – yielded a 7-7 tie at halftime.

It looked like the third period might end in an 8-8 tie after the Australian goalie James Stanton-French saved Bonanni’s 5-metre penalty shot, and US defender Jesse Smith blocked a dangerous missile in front of the American cage with less than two minutes to remaining. But Luca Cupido created a 9-8 US lead in the final 16 seconds when he slammed in his second goal of the period.

And then, in a fourth period for the ages, Australia immediately went on a three-goal blitz to make it 11-9. After a US time-out, Josh Samuels scored for the US on a power play, but Aussie Cotterill responded with two goals of his own (a 5-metre penalty shot followed by a high lobbing goal) to give Australia a 13-10 lead with 3:11 to go.  Alex Bowen initiated a comeback on a power play with 2:05 to go, but the US still needed two goals to tie it with one minute remaining. Seizing a 6-on-4 advantage, Samuels stuffed the ball into the Aussie net to make it a one-point game. With 14 seconds left, Bonanni tied it to send a partisan crowd aroar.

The shootout pitted 19-year-old American goalie McQuin Baron against Australia’s 2012 Olympic keeper Stanton-French. Australia shot first. Two-time Olympian Rhys Howden converted but Tony Azevedo did not. The next six shooters scored: Richie Campbell (AUS), Bonanni (USA), Cotterill (AUS), Cupido (USA), Jarrod Gilchrist (AUS), and Bowen (USA). The last shooter for Australia, Billy Miller, wound up. Baron made the save. The final American in the line-up was John Mann, a Corona Del Mar High School graduate who was competing in his alma mater’s pool. Stanton-French made the save. Goal denied. Australia won 17-16, to advance to the gold medal game. The US will meet China for the bronze.

“We always knew it was going to be a tough game, but we definitely didn’t think it would be that close – especially three goals up with three minutes to go. Full credit to the USA team, they never gave up. I think it was a great spectacle for the crowd. And I think it’s what’s going to happen every time we play each other. They beat us in a shootout in the World Cup last year and I was in the net. Nice to finally get the right result.”

“We’d rather have won, obviously, before the shootout. But it’s fun. [Was this your first international shootout?] That I was in the cage for, yeah. “[What was going through your head?] Just focus on the ball. Don’t let emotions get to you. Just play your game, nothing different.”

The second semifinal was another tension-filled match.

The first period featured nearly non-stop scoring as China and Brazil drew to a 5-5 tie after eight minutes.

But the second period was the opposite. It produced only four goals, including Felipe Perrone’s solo shot with 1:06 left to give Brazil a 7-6 lead – its first lead since tallying the first goal of the game. Then, with one second to go in the half, Adria Delgado stuffed in one more to give the 2016 Olympic host an 8-6 lead at the break.

In the third quarter, each team scored four times – including Li Li’s power-play power shot with 10 seconds left to keep China in the game but trailing 11-10. Then, with one second to go, China’s goalie Wu Honghui inadvertently tipped the ball to Adria Delgado who was waiting in front of the cage and batted it in to give Brazil a 12-10 edge.

In the fourth quarter, China scored twice to tie it at 12 with 2:49 left in the game. Bernardo Gomes of Brazil answered with putaway on a power play. Then, with 1:17 to go, both teams drew an exclusion, and when China’s Yu Li Jun reentered the game too early, Brazil got a crucial 5-meter penalty shot. Guilherme Gomes converted to make it 13-12. Bernardo Rocha scored once more as the clock read zero to seal Brazil’s win,14-12, and advance to the gold-medal match against Australia. China will battle the US for the bronze.

“We didn’t play well this night. We made many mistakes. The team was not so well organized as before. Our qualification for the Super Final provoked a little relaxed in the players. We had to struggle during the game to keep the intensity. But when you play this kind of game not so well and win, it’s a good sign for the team.”

“We played very good in attack but defense gave away easy goals. Fourteen goals is no good. [With] 6-on-5, okay — but today was more goals with 6-on-6.