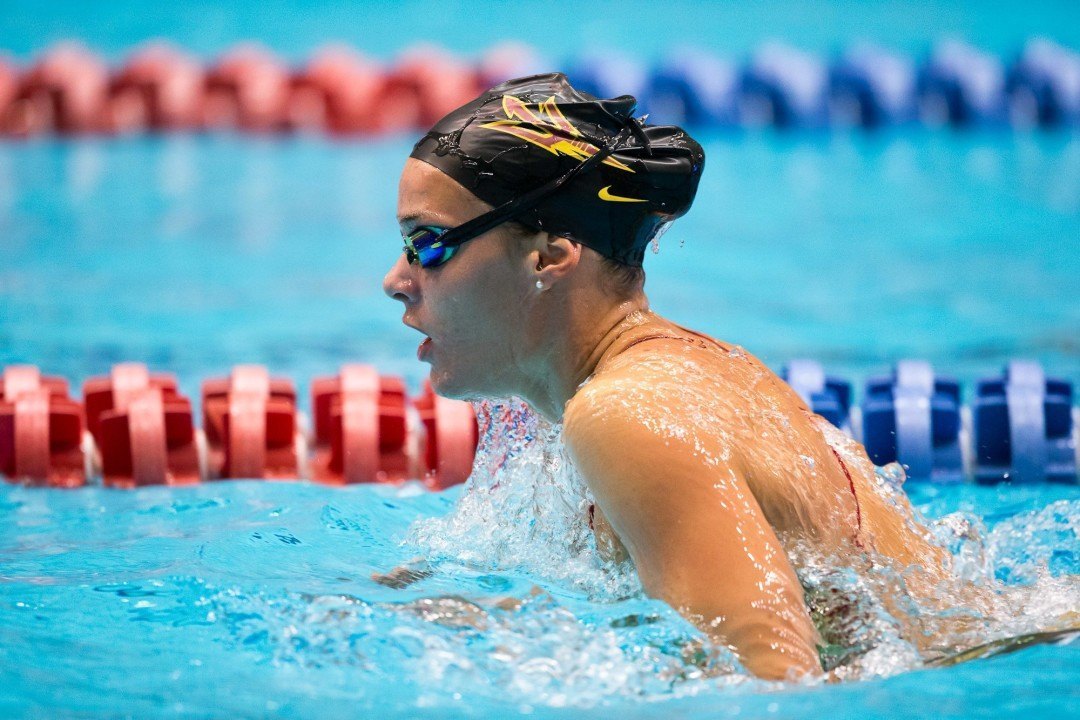 The women of Washington State got the job done in Tempe today against the Sun Devils. Current photo via Tim Binning/TheSwimPictures.com

The Washington State women road tripped to Tempe today to take on the Sun Devils at home.  The meet started out looking as though Arizona State was inching away, with the top time in three of the first four events, but the Cougars clawed their way back to take the win 115-90.

While Arizona State was able to take both relays and turned in the winning time in four of the individual events, the Cougars took five events with two of them being 1-2 finishes and another two 1-3 sweeps.

The only double event winner in the meet was ASU’s Alysha Bush, who took the sprint freestyles. She took the 50 free in 23.19 and the 100 in 50.11, nearly a full second ahead of the Cougars’ Addisyn Bursch at 51.59.  Both of Alysha’s winning times were just shy of NCAA “B” cuts.

The most notable time of the evening was the 200 backstroke winning time from the Cougars’ Jasmine Margetts.  Her 1:59.21 was the closest to an NCAA “B” cut, just missing the standard by .02.  Teammate Loree Olson was not far behind her for the second place finish in 2:00.07.  WSU’s 200 breaststroke winner, Presley Wetterstrom, was also approaching the “B” cut at 2:16.58.

While it was not enough to change the outcome of the meet, the 800 Freestyle Relay win from the Sun Devils was a come from behind victory, with senior Marina Spadoni anchoring the top split of the night at 1:49.27.

Impressive meet for the Cougars! USA Swimming just posted a great interview with their coach: http://usaswimming.org/ViewNewsArticle.aspx?TabId=0&itemid=12200&mid=14491

Washington State showed what the rest of the swimming world know – ASU is not very good and, based on the level of swimmers they are signing – they will not be very good next year either

Great improvement for ASU this year, and next year is even more promising for ASU!!! Awesome recruits this year for Bowman and staff! Elite swimmers who are currently high school seniors with NCAA B cuts from last season as high school juniors, as well as Olympic Trials qualifiers recruits! ASU is a team beat in the coming years, for sure. GO Sun Devils!!!