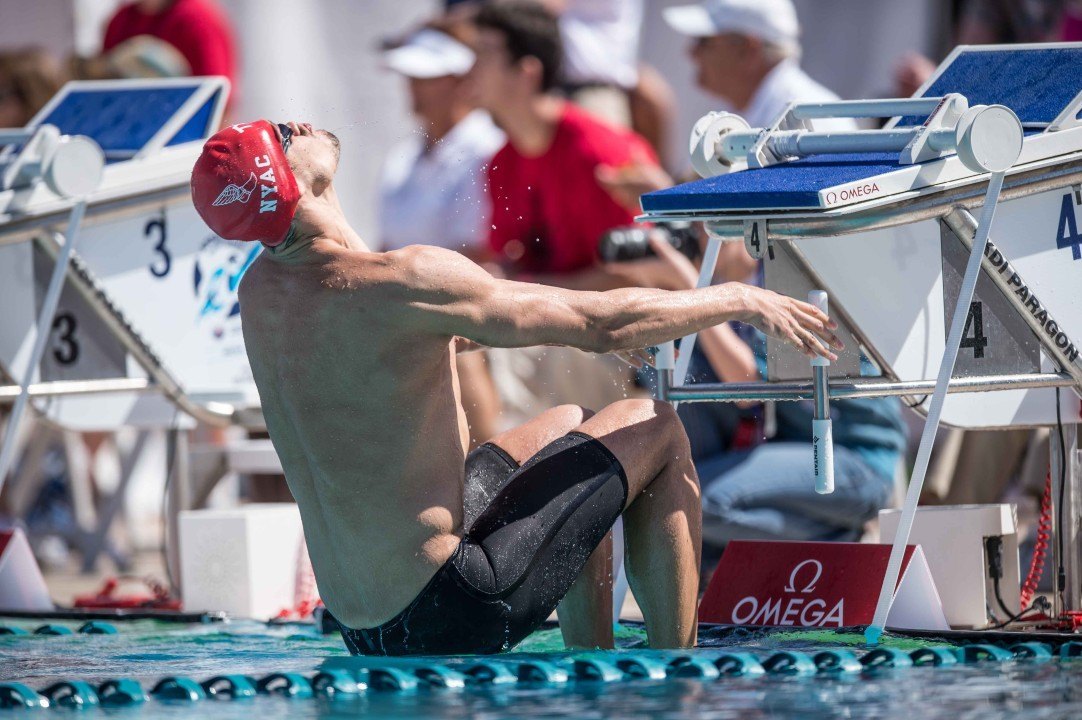 Former Russian Olympic bronze medalist Arkady Vyatchanin will not be able to represent Serbia at this summer's Olympic Games as FINA has denied his request for a change in citizenship. Archive photo via Mike Lewis/Ola Vista Photography

Former Russian Olympic bronze medalist Arkady Vyatchanin will not be able to represent Serbia at this summer’s Olympic Games as FINA has denied his request for a change in citizenship.

Vyatchanin announced the news on Wednesday in a telephone interview with the Associated Press. Last week, we reported that Vyatchanin would not be a part of the Serbian roster for the European Championships due to a holdup with his request for a sporting citizenship change with FINA.

A few days later, Vyatchanin posted on his Facebook page, explaining the issue more fully. The hangup appears to be with the swimmer’s residency in Serbia. FINA rules require Vyatchanin to prove he has lived in Serbia for 6 of the last 12 months. In his Facebook post, Vyatchanin shared the difficulties of providing for his family financially while living in Serbia.

Vyatchanin was only able to make swimming financially viable while competing in the United States, where the Arena Pro Swim Series provided prize money and the New York Athletic Club provided funding for meets and expenses.

Vyatchanin says in the AP piece that he will now aim for his U.S. citizenship, though he doesn’t have enough time to do so before Rio. He did not, however, rule out competing for an American Olympic berth in 2020.

The swimmer also said he does not regret his decision to leave Russia after winning two bronze medals for his native nation in 2008.

“I love my country, my native country. That will stay in my heart forever,” Vyatchanin said in the interview. “I would like to visit sometime. But the government is the reason why Russia looks bad right now. Unfortunately, that’s the way it is.”

Does he have any familial ties to Serbia? I don’t know, but I don’t think he does.

While I agree it sucks for this great athlete, who seems to be a stand up guy and has a beautiful backstroke, it would be (is) absurd if (that) athletes could (can) just pick a country off the map, have no blood ties to the country, never live there, and then be on their Olympic team. Not exactly the way the games were intended. Maybe the IOC should come up with an “unattached” category, with strict qualifying times, for all the displaced people, given the increasing number of war-torn regions.

He can also just stay in the U.S., because after we… Read more »

Serbia went to bat for him as to why he spends so much time in the US.. Money. They wrote a letter on his behalf because the opportunities for him to live off of the sport are few and far between there.

I just find it ridiculous that a country can forge times and there are zero sanctions for this dishonesty, but an Russian ex pat leaves the country because of its government, chooses a home “near by” and works in the US to feed his family and FINA begins to enforce “rules”…

Indeed, we will be “great” again. Won’t have a friend in the world, but at least we’ll be “great.”

Complete example of FINA being F.I.N.A.

I like him more and more.
Courageous guy to speak like that.
That’s really a shame he can’t participate in the next olympics. FINA has no heart.

Maybe he could swim in the new IOC all-refugee team.
http://swimswam.com/ioc-supports-refugee-team-rio-2016-olympics/
I don’t know if he fulfills the criteria but he has no country to represent and has left a kind of dictature to take refuge in USA.

Is that ‘kind of a dictature ‘ about Putin or President Trump ? Those two will direct the course of the world .

Gina, how much time it takes you to downvote so much my comments? I would like to know. 🙂

And looks like you’ve found a way of upvoting your own comments! I’m impressed. 🙂

Bobo I very rarely up or down vote. I just pop in as respite from following wars like Syria Iraq & Libya . Now I’m having to expand to Turkey . I am not at all a vindictive person – I’d more likely just say F***off. I don’t have anything in common with european people -you included. You may as well be from an orang-utan colony for all I care . BUT BUT But heehee I was right on Donald & you were wrong .

U are just the Biggest troll on here – no interest in swimming but fake to be a swimming fan – how honest are u with your small self , i wonder .

Arkady is one of the great people in this sport. This really stinks. I’d hope for a way to rocket docket him to be a US citizen. It would be very hard to make the US team in these events, but would love to see him compete at US trials.

Genuine question:
Why didn’t Vyatchanin want to represent USA?
After all, he’s been living and training here for years and his wife has jobs and earns money here.

He will only be eligible to get the US citizenship in early 2017. So are the immigration rules that you need to live in the country for a few years after you got the green card. Same thing was with Morozov who did not have enough time to get the citizenship before London-2012 and started competing for Russia instead.

I think the reasons are Grevers, Murphy, and Clary.

The reasons are like Swimdoc states below. It is easier to make the Olympic team for any country besides the USA.

Fina is so apathetic to financial troubles sad truly. They should know how hard it is to make a living while swimming