Virginia Tech and Duke Each Win Five in Quad Dual 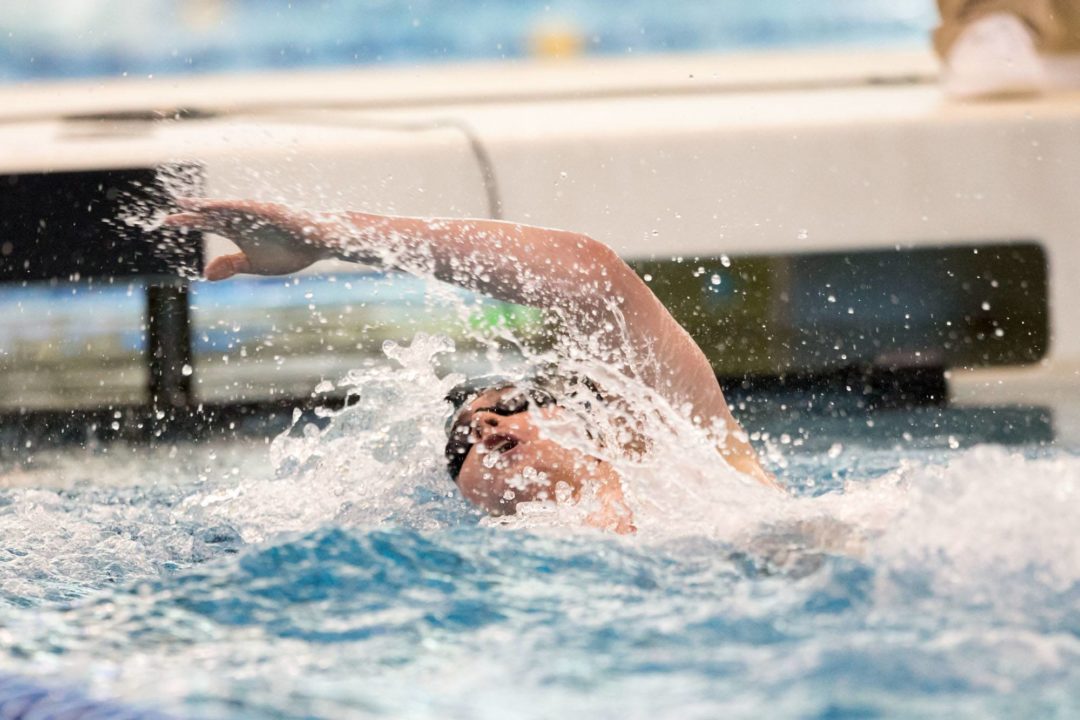 The Duke women and Virginia Tech men each swept their three opponents during the two day quad-dual meet hosted by Virginia Tech this weekend. Current photo via Tim Binning/TheSwimPictures.com

VIRGINIA TECH VS. DUKE VS. WEST VIRGINIA VS. WILLIAM & MARY

As you might expect given the scores, the Hokies or Blue Devils touched first in every single race, except one.  The lone exception was William & Mary senior Jospeh Eiden‘s victory in the men’s 100 free.

CHRISTIANSBURG, Va. – The Virginia Tech swimming and diving programs wrapped up its quad meet against Duke, West Virginia and William and Mary on Saturday with the men’s squad going 3-0 in its dual meets and women H2Okies going 2-1.

Sophomore Norbert Szabo led the men on day two where he took first in the 200 and 1650 free. The Budapest native also swam the first leg of Tech’s 400 medley relay team that turned in a top time of 3:00.44.

Senior Jessica Hespeler and junior Klaudia Nazieblo each won two events for the women’s squad and sophomore Ashlynn Peters, the reigning ACCWomen’s Diver of the Week, placed second in the one-meter after taking first in the three-meter event yesterday. Junior Ashley Buchter followed Peters in the three-meter with a score of 263.25. Junior TJ Shinholser’s score of 377.65 won the men’s three-meter for the H2Okies.

“I consider Duke to be extremely strong and deep in both men’s and women’s diving. I was pleased with how we competed with them,” head diving coach Ron Piemonte said. “For Ashlynn to win the three meter and her and Ashley going 2-3 in the one meter shows our competitiveness. On the men’s side, I was very pleased with them dominating the three-meter event with Thomas Shinholser coming out with a big win.”

After Hespeler and Szabo took first in the 1650 free, sophomore Ian Ho swam a 20.26 in the 50 free, nearly matching a personal best. Nazieblo’s top and NCAA B-cut time of 54.63 in the 100 back was followed by senior Robert Owen and sophomore Jake Lamparella’s top three finishes that highlighted the action in the 100 breast.

The H2Okies took the top two times in the men’s 200 backstroke led by senior Brandon Fiala with a 2:00.13 followed by junior Justin Edwards. Along with Hespeler and Szabo taking first in the 200 free, freshman Hassler Carroll continued to impress as he placed second in the event with a 1:40.61.

Arguably the most thrilling moment of the day was junior Christopher Wang’s victory in the 100 fly where his time of 49:69 edged out the second place finisher by one one-hundredth of a second. Before Tech finished strong in the 400 freestyle relay, the H2Okies swept the 400 IM thanks to first place finishes from Nazieblo and sophomore Michael Craddock who turned in a 4:02.17.

“It was a strong weekend of competition. Duke looked very strong and should be commended for their weekend as well,” head swimming and diving coach Ned Skinner said. “The other teams also competed very well and it was good college action across the board. We have plenty of work to do and we hope to use these next two weeks to continue with our training and sharpen our important skills.”

The H2Okies will next travel to Pitt for an ACC tri-meet with the Panthers and Notre Dame that begins on Friday, Nov. 4.

CHRISTIANSBURG, Va. – The Blue Devils rounded out a two-day quad meet against Virginia Tech, West Virginia and William & Mary Saturday, with the women’s team going 3-0 against the field and the men notching victories against the Mountaineers and the Tribe but falling to the host Hokies.

“We felt pretty good about the fact that with a good night’s rest we could come in and get the job done,” said head coach Dan Colella of the women’s team. “They absolutely did a great job of breaking up some of their top swimmers and I think were able to win some events that maybe Virginia Tech thought they would win. It was just a really great overall team effort. Probably one of the better meets we’ve had in some time, just from top to bottom.”

After taking the top two spots in the 400-yard medley relay last night, the Duke men picked up right where they left off Saturday morning, doing so again in the 200 medley relay. Sophomore Max St. George, senior Peter Kropp, senior Michael Miller and sophomore Yusuke Legard turned in the winning time at 1:29.05, while the quartet of sophomore Maddie Hess, senior Ashleigh Shanley, freshman Alyssa Marsh and senior Maddie Rusch won the same event on the women’s side (1:40.70).

Sophomore Verity Abel and freshman Brittany Kampfer maintained the strong start with a two-three finish in the women’s 1,650 freestyle. Abel tapped the wall at 16:42.66, while Kampfer’s 16:48.55 clocking broke her into the top 10 on the Blue Devils’ all-time performance list. Junior Matt Johnson was the top Duke performer in the men’s mile (15:54.10).

Rusch added to her impressive weekend with a first-place finish in the 100 butterfly, earning another ‘B’ cut at 54.21. Marsh took second (54.57) and junior Isabella Paez third (54.89). Junior Lizzie Devittpaced the squad in the 400 IM (4:25.68), placing second, before senior Kirby Quinn won the 1-meter springboard diving event for the first time in her career. Quinn surpassed the NCAA Zones qualification standard with a career-best award of 283.80.

“Kirby, as a senior, her first time winning the 1-meter in a dual meet competition, couldn’t come at a better time,” Colella said. “That was really critical for us.”

Rusch, Marsh, Aitchison and Goldman teamed up to take first in the 400 freestyle relay (3:22.91), helping to secure three victories for the Blue Devil women.

Legard, Payne, freshman Miles Williams and Miller were second behind Virginia Tech in the men’s 400 freestyle relay, combining for a time of 3:02.24.

“Very proud of the men and the way they performed,” Colella said. “We had a lot of great swims both sessions. To win that 400 medley relay last night and open up winning the 200 medley relay, we’re kind of picking up where we left off last year with those events. I think one of the things that was really exciting for a lot of the athletes was the fact that they had faster times this early in the season than they did at any point in-season last year.”

Racing for the third consecutive weekend to open the season, the Mountaineers faced off against Virginia Tech, Duke and William & Mary at Christiansburg Aquatic Center. Senior Emma Skelley, sophomore Merwane El Meriniand sophomore Emma Harris all finished in the top four on Saturday to pace WVU.

“We had a very solid day today,” coach Vic Riggs said. “I thought both the men’s and women’s teams’ relays continued to get better, and we improved on some of our little things that we discussed last night. With this being our third weekend in a row of racing, the teams fought hard. On the women’s side I’m really proud of their effort today. Being the third meet that we haven’t had a full squad because injuries, for the ladies to battle back to have it come down to the last relay shows their fight.

“Now we have four weeks to get ready for NC State.”

The first individual event was the 1,650 freestyle. Skelley backed up her WVU Natatorium-record swim a week ago with a 17:07.16 to finish fourth overall. In the men’s race, junior James Koval led the Mountaineers, touching the wall in 16:10.41 to finish sixth.

West Virginia notched a pair of eighth-place finishes in the 100 backstroke. Freshman Julia Miranda led the Mountaineer women, touching the wall in 57.33, leading a tight pack of four swimmers that finished within 0.15 seconds. Sophomore Maggie Miller’s 57.43 was also good for a top-10 finish, in 10th

The Mountaineers earned a pair of top-six finishes in the women’s 100 butterfly. Freshman Julia Miranda led the way in fifth with a 56.38, while freshman Morgan Bullock’s 56.48 was good for sixth. For the men, freshman Gabe Swardson led the way with a 51.33 to place 10th.

The final individual swimming event was the 400 individual medley. Freshman Alex Pampalone’s 4:33.85 was sixth, and sophomore Morgan Carr placed ninth with a 4:34.92. For the men, Hene notched his second top-10 finish with a 4:13.34 to place 10th overall.

The two-day event concluded with the 400 freestyle relay. The WVU women notched a sixth-place finish in 3:30.72, while the men came in seventh in their race, in 3:06.00

On springboard on Friday, junior Logan McHenry placed seventh overall on the men’s 1-meter with a 297.00 to lead WVU, while sophomores Julia Calcutt and Madelyn Woods earned top-10 finishes on women’s 3-meter, with a 225.05 and a 215.15 to finish ninth and 10th, respectively.

WVU has a month off of competition before traveling to the three-day N.C. State Invitational in Greensboro, North Carolina, on November 17-19.

Where is Maggie Gruber for VTech this yr???? Have not seen her in any meets yet.