Vipers of Albuquerque Teammates Sign NLIs; One Headed to NSU, the Other to UTPB 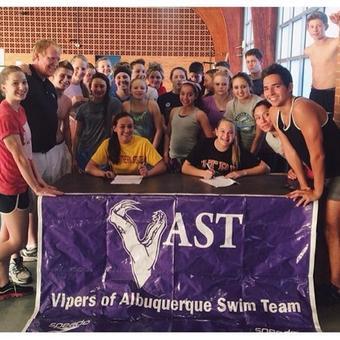 Two Vipers of Albuquerque Swim Team and Rio Rancho High School teammates are parting at the fork in the road: Cassandra Maillet will go north to Northern State University while Claire Balmer will head south to University of Texas of the Permian Basin for the 2015-16 season.

Cassandra Maillet, from Rio Rancho, New Mexico, signed an NLI to swim at Northern State University. Maillet has competed in high school for Rio Rancho High School and Singapore American School. Her best performances are in SCM and come from the Interscholastic Association of Southeast Asian Schools championships. Her top times from USA meets are:

Claire Balmer, who also swims for Rio Rancho High School, has signed with University of Texas of the Permian Basin. She was a finalist in the 500 free at the 2014 NMAA High School Championships but her best events are:

UTPB is a member of the Pacific Collegiate Swimming Conference. Balmer would have scored in the 200 back (B-final), 100 back (C-final), and 400 IM (C-final) at the 2014 PCSC conference championships. She will be a real asset to the Falcons from her first days on campus.