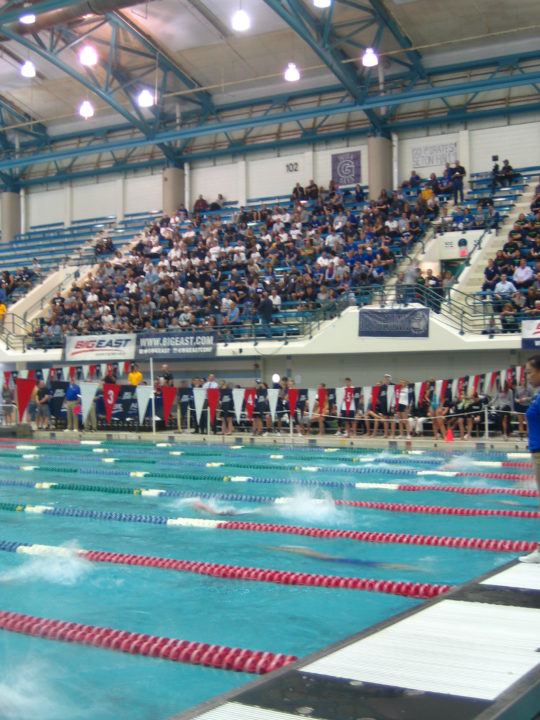 Villanova maintained perfection with a sweep of the 400 Individual Medley.   They placed six Wildcat swimmers in the finals – and took six of the top seven places. Christine Sullivan touched the wall first taking the gold in 4:21.76.  Teammates Caitlin Daday followed (4:21.79) and Gabrielle Daigneault (4:24.97) took the bronze.  To this point – Villanova has taken the gold in every individual event and relay…..  Amazing.

The women’s 100 butterfly looked to be a tossup based upon prelim times.  The finals did not disappoint – with an exciting race won by Caroline Gaertner of Xavier.  She touched the wall at 53.72 followed by Sydney Simpson of Seton Hall (54.42) and Dorothy Morgan of Georgetown (54.90).  Both Gaertner and Simpson’s times made the NCAA “B” cut.

Villanova again had six of the eight finalists in the 200 free and this time swam the six fastest times. Alex Fabbri of Villanova swam to her second individual title winning the 200 freestyle.  She touched the wall at 1:46.15 for the gold and an NCAA “B” cut.  Emily Mayo (1:47.37) and Jessica Randolph (1:49.52) followed as silver and bronze medalists for Villanova.  Both Fabbri and Mayo came in below the NCAA “B” cut time.

Molly Fitzpatrick from Georgetown won the 100 breastroke race with a time of 1:01.27.  Heather Farley from Villanova (102.60)  and Sydney Simpson from Seton Hall (1:02.94)  followed for silver and bronze. Fitzpatrick’s time was a NCAA “B” qualifying time.

In the 100 Backstroke Darby Goodwin of Villanova repeated as Big East Champion.  Her time of 53.15 edged out Caroline Gaertner of Xavier (54.43) and Paxtyn Drew of Xavier (55.23).  Both Goodwin and Gaertner had NCAA “B” qualifying times.

In the 100 butterfly Villanova’s Jake Hoin and Xavier’s Albert Hitt battled it out.  It was deja vu from last year’s Championship when Hitt out-touched Jake Hoin for the Gold.  Hitt’s time of 47.65 allowed him to maintain the title he won last year. Jake Hoin repeated as a silver medalist (48.13) and   Connor Phillips of Seton Hall took third with a time of 48.50.

Men’s 1-meter diving saw Ryan Blom from Georgetown extend his lead from the prelims to repeat as 2017 Big East Men’s Diving Champion.  He totaled 508.35 points  followed by teammate Jared Cooper-Vespa (501.30) for silver.   Alex Pfisterer of Seton Hall took the bronze with a score of 490.55.

The Men’s 100 Backstroke was the closest final of the day.  Sam Johanns of Xavier out touched his team mate Nate Runyon with a time of 49.24 beating Runyon (49.26)  by two hundredths.  David Bunnell of Villanova rounded out the field in third with a time of 49.44.

Team Scores at the completion of day 3 – The Big East Swimming and Diving Championships:

The last day of competition is tomorrow with trials starting at 10am, with women’s 3m diving prelims at noon and finals commencing at 6pm.