Race video is courtesy of Universal Sports Network, a SwimSwam Partner. There’s something to be said for consistency after a... Current photo via Mike Lewis/Ola Vista Photography 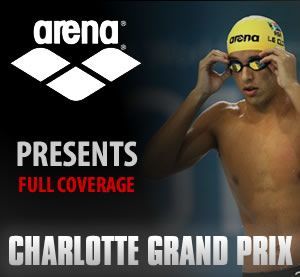 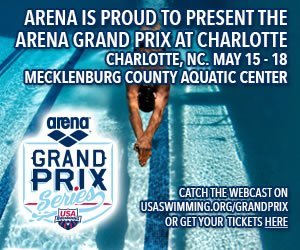 There’s something to be said for consistency after a long layoff. Michael Phelps, in the only final we’ll see from him this week at the 2014 Charlotte Grand Prix, won the men’s 100 meter butterfly in a 52.13. That ties his 6th-best-in-the-world time from the Mesa Grand Prix in April, as he’s now gone identical times in both of his 100 fly finals swims since returning from retirement. This was Phelps’ first win since his return to competition.

While the final time was the same, Phelps swam a very different race in Charlotte than he did in Mesa. With a fast-starting Belarusian Pavel Sankovich next to him, Phelps went after the first 50 to the tune of a 24.3 front-half split. That’s a significant four-tenths better than he was in his first 50 in Mesa, where he was next to Ryan Lochte, who like Phelps is not known as a fast-starter in the 100 fly.
Again Phelps struggled with his turn, though he still had plenty of room to win ahead of Sankovich who was a 52.72 for 2nd.
In his post-race interview, that frustration started to creep back into Phelps’ voice, which is something we haven’t heard from him until this point of his comeback. It wasn’t the same frustration as we’ve heard from him in years past, though. He’s still relaxed and sounds like he’s enjoying the race. But his competitiveness is kicking back in: in Mesa, he said he felt like a summer league swimmer. In Charlotte, he’s starting to show the pressure that the greatest athletes always put on themselves. He was a little frustrated with his turn, and he would’ve preferred to improve his Mesa time (Rowdy Gaines said that he wanted under 52), but that just shows that he’s hungry.
He’s still relaxed. His frustration is not the on-edge frustration that we saw from Phelps pre-2012 when he seemed a little burned-out at times. His frustration with the turn comes with a little bit of a grin rather than a scowl, and maintains the same energy. So long as he maintains that relaxation, results like these are a great sign for Rio ahead.
(For a comparison of what that frustration used to look like, click here. There’s a clearly different tone to his voice.)
Phelps and the North Baltimore Aquatic Club will now head for their annual pilgrimage for a month of altitude training at the United States Olympic Training Center in Colorado Springs, Colorado.

Wow! Congrats!
You analyze the ton of the voice now to draw some conclusions?
Interesting.
CSI swimswam with Horatio Keith as chief investigator!

Seriously, it’s clear MP isn’t happy with the turn. His wall was again really bad.
52.13 like that and while being bearded is pretty impressive.