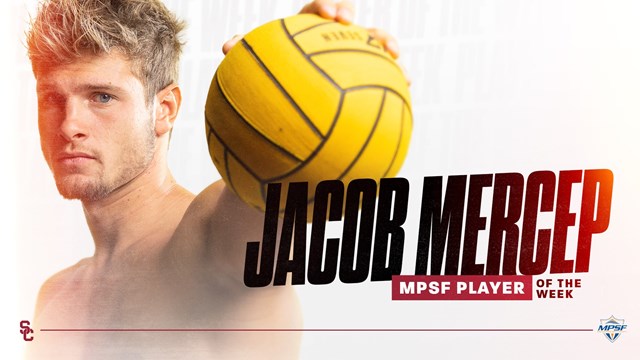 Jacob Mercep is the Mountain Pacific Sports Federation Player of the Week and Max Miller is the Newcomer of the Week. Current photo via USC Athletics

After a powerful showing in a nonconference win over visiting No. 5 Pepperdine, two members of the USC men’s water polo team have earned honors from the MPSF. Jacob Mercep has landed MPSF Player of the Week acclaim, while freshman Max Miller has his first pick as MPSF Newcomer of the Week.
Jacob Mercep scored five goals in under eight minutes to fuel the Trojans’ powerful push out of reach of visiting Pepperdine. He’d also hand out two assists and make two steals and draw an ejection for the Trojans in the win. With his five-goal outburst against the Waves, Mercep cracked USC’s top-20 scoring charts, now ranked No. 19 all-time with 137 career goals as a Trojan. This is Mercep’s fourth MPSF Player of the Week selection and his first this year.

Max Miller’s heroic turn and score out of two-meters in the second quarter gave USC a two-goal lead and arguably shifted the momentum for the Trojans, who went on a 5-0 scoring run soon after. With more hard work at set, Miller also drew two ejections for the Trojans in the game. This is Miller’s first MPSF award, and he’s the second USC freshman to be named MPSF Newcomer of the Week this season.

This is the second USC sweep of the MPSF’s weekly awards this season. On Jan. 25, Nic Porter was named Player of the Week and Carson Kranz was Newcomer of the Week.
Mercep, Miller and the Trojans have three more tough MPSF matchups ahead this weekend in an event hosted by Stanford. On Saturday (Feb. 20), USC faces California at 1 p.m. and then takes on Stanford at 6:30 p.m. On Sunday (Feb. 21), USC clashes with UCLA at 3:30 p.m. All the action is set to be played at Stanford’s Avery Aquatic Center.